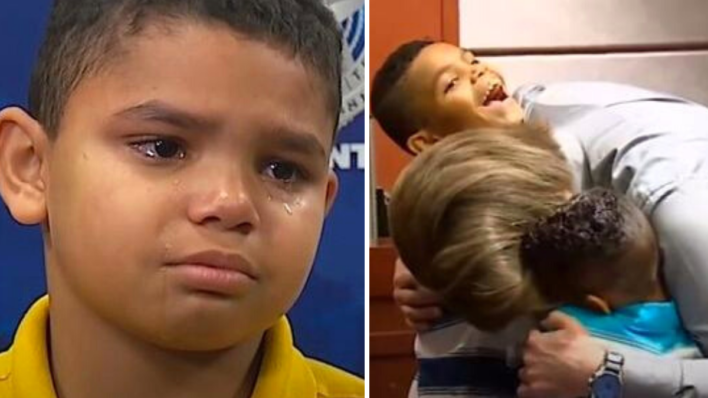 An incredible turn and a little luck created a happy ending for two brothers who were separated by trauma.
By Bryan Liquor    January 6, 2022

An incredible turn and a little luck created a happy ending for two brothers who were separated by trauma.

Brothers Tre and Ke’lynn, aged 10 and 7, had an extremely strong bond that made them inseparable whenever they were together. There was just one problem: They didn’t live in the same home and hadn’t for years.

It had been almost 4 years that the young boys were placed in Child Protective Custody in Texas in order to heal from family trauma. They spent almost the entire time living in separate foster homes. They only got to see each other once a month and had to be pried apart after each heartbreaking visit.

Speaking with WFAA, a teary Ka’lynn said being apart from his big brother hurt.

I want to see him every day and I don’t.

When Tre was asked what was his one dearest wish, he simply said he wanted his brother “to live with him.”

The father who found them

When Dr. Robert Beck saw the newscast about the boys’ story he was instantly touched and wanted to do something to give them the home they truly deserved.

I was crying mostly because it just pulled at my heartstrings, and I felt an instant connection with the boys, and I said I’ve got to figure out a way to get these boys in my home and learn more about them.

And so, Beck brought the two boys to live with him, though the adoption process wasn’t finalized yet.

Beck brought the boys to the North Texas courtroom, telling them it was to take pictures. In reality, it was adoption day.

Immediately after the news was made official, Beck and his new sons shared their first group hug. The two brothers were now a part of a family; they had each gained a father.

Tre summed it up perfectly:

We got adopted today, and I feel good.

Love is where home is

Beck says that giving Tre and Ke’lynn a home- along with an older brother- is just as much a dream come true for him as it is for them.

Just being able to give them a forever home and know that they’re forever mine is just super special.

According to childhelp.org, 1,840 children a year- or 5 a day- die of abuse and neglect. Although they escaped the worst, being apart created a new struggle for Tre and Ke’lynn.

Yet thanks to faith and one stranger’s open heart, they have a real family at last.

family is what Turns a house into a home
“Family means nobody gets left behind or forgotten.” — David Ogden Stiers
Tags
Share
← Prev Post Next Post →