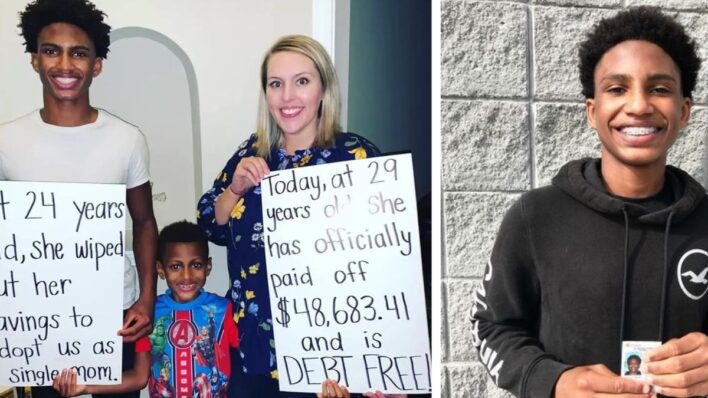 Most become teachers to make a difference in their student’s lives. One teacher did so beyond her wildest dreams when
By Bryan Liquor    September 10, 2021

Most become teachers to make a difference in their student’s lives. One teacher did so beyond her wildest dreams when she met one special kid with a raw deal.

Many who enter teaching as wide-eyed optimists usually get a grim reality check. Underpaid, overworked and underappreciated, it’s no wonder why it’s listed among the most depressing careers. The going gets even worse with unruly students.

Chelsea Haley, teaching fourth grade at ‘Teach For America” in Louisiana, learned that the hard way with problem child Jerome Robinson. She told CNN that things with the 12-year-old got so bad, it almost pushed Haley to give up.

“At certain points, his behavior got so bad, I thought, ‘I can’t do this anymore. I can’t be a teacher’”

Yet not only did she not give up, she doubled down to get through to Robinson – and it paid off. Per The Root, the two got so close that other teachers would send Jerome to Haley’s classroom, where Robinson was sure to finish his work.

“I got a lot of thankful emails and knocks on my door,” she said.

A big factor behind their closeness was Haley learning the reason behind Robinson’s unruly behavior: a rough home life. Jerome still lived with his biological mother, who was having a difficult time raising him and his newborn brother Jace.

“It was really hard on her after she lost her husband,” Haley said. There was also a little sister who died.

“It was just a combination of tragedy coupled with the other social situations you face when you live in poverty,” she added. “[The boys] spent a lot of time living with their grandparents.”

Haley said that the thought of becoming a mother to Robinson and Jace crossed her mind for a moment, then thought nothing more of it. That was until the next day, when Jerome approached her with a question.

“He just asked me if he could live with me. I told him I had been feeling the same thing”

Not long after, Haley went to dinner with the two boys and their mother. Haley explained to the mother that she was wrapping up her last year with the school and was planning to return to Georgia. That’s when the mother made a bold request.

“You can go back,” she told Haley. “But I want you to take Jerome and Jace with you.”

And with that, a family was born.

Haley filed papers for permanent custody of Jerome, and then filled out papers to adopt Jace, too.

She took all of her retirement savings towards a home for her new family in Marietta, Georgia. Yet even with her savings, adopting a family is expensive business. To stay afloat, Haley used credit cards and delivered groceries for extra cash to support her sons.

“I never thought I’d be a single mom at age 24, especially of two boys, one of which was my 12-year-old student. And the other one who was only a year-and-a-half,” she said.

Family is thicker than blood

Now, with her debts paid off and a beautiful family, Haley says that the sacrifices were all worth it.

“Being their mom is the greatest blessing of my life. I get to wake up in the morning and love two little guys”

There’s no ’23andme’ test to connect Haley and her two boys. There’s no old photo album to dust off and reminisce to. Yet their family has a bond as strong as any, with love for generations.

Just like Haley, when you’re open to those around you, you’ll discover that you have more loved ones than you thought.