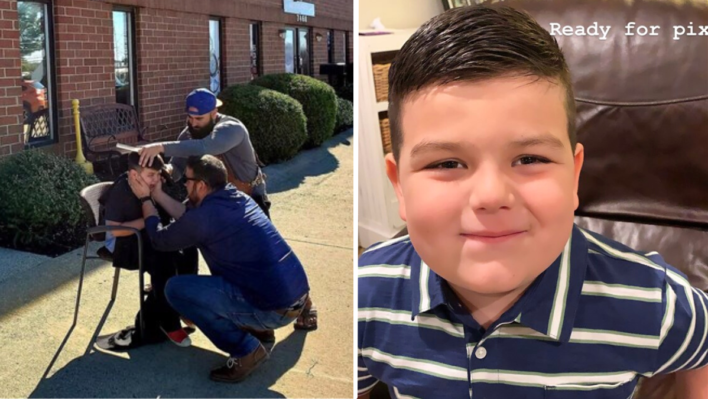 This barber proved that even the smallest acts of kindness make a big difference.
By Amber Dowling    January 23, 2023

This barber proved that even the smallest acts of kindness make a big difference.

For people living with autism, the most minor details — details many people may take for granted — can sometimes make or break their day.

So when the parents of seven-year-old Brycen Juby encountered a barber who took that extra step to ensure their son’s comfort, it was a pretty big deal.

Why One Little Boy Disliked Getting His Hair Cut

She added that as a toddler, Brycen was able to get his hair cut at specialized kids’ salons, but by the time he was three years old, the experience was too overwhelming for him. From then on, his parents cut his hair at home.

RELATED: Girl With Autism Refuses to Eat Her “Broken” Burger – Chili’s Waitress Has a Surprising Response

However, with Brycen starting public school and preparing for his first official photo day, his folks wanted to treat him to a real-deal haircut.

“She wanted to bring her son in during a non-busier time of the day, so it would be a little easier on him,” Marco Conti, the co-owner of Marky Fresh Barbershop in Mentor, Ohio, added to the publication.

So they set up a time in mid-October to get the fresh cut.

How a Little Boy Received a Not-So-Routine Haircut

On the big day, Brycen walked into the shop and he immediately felt overwhelmed.

“When Brycen and his dad came in, he felt super emotional, crying inside about to get his haircut,” Conti recalled. “I could tell he felt more comfortable outside, so I was like right off the cuff, ‘What if we cut your hair outside? Would you feel more comfortable?’ He agreed. I just wanted to make him feel safe and comfortable.”

So the barber, Brycen, and his dad went outside, where Conti gave him a swift but swanky new ‘do. The boy’s parents were filled with gratitude for the small but kind gesture, which meant the difference between a routine and traumatic experience for their son.

RELATED: Girl With Autism Is Downcast After Receiving Straight Ds – What Her Dad Does Next Goes Viral

One of the shop’s employees snapped some photos and posted them on social media, and before long, the story went viral.

“To have a company so willing to accommodate is such a relief on my end or my husband’s end,” Ashley Juby explained. “It’s pretty fantastic. I found if you reach out, there are good people that are willing to help you.”

“I really didn’t feel like it was such a big deal at the time,” Conti added. “I felt like anyone would do that. I just thought it was something that I had to do.”

How One Barber Proved Small Acts Make a Big Difference

In an interview with Fox News, Conti explained how the shop tries “to make it an equal playing field for everybody, and we try to adapt to that person and make it a personal experience for them.” At the end of the day, he wants each and every customer to feel good when they’re done getting their hair cut.

The Jubys certainly felt great after their experience with Conti. Moving the cut outside to help Brycen feel less overwhelmed may have seemed like a small thing at the time, but it was a big deal to these parents who just wanted their kid to be comfortable.

“You never know someone else’s story,” Ashley continued to Today. “If you see a little kid and he’s super upset, just be kind, be patient, be compassionate, and maybe ask if they need help. A little can go a long way.”

RELATED: Grocery Store Worker Notices Teen With Autism Staring At Him – What He Does Next Goes Viral

That’s how Conti tries to live, at any rate. “Be compassionate to one another,” he wrapped. “Even the smallest act of kindness can mean the world to someone.”

While we don’t all cut hair, Conti’s statement is something we could all take to heart. That could mean holding an anxious friend’s hand at their next appointment, asking an overwhelmed parent if they need help when you spot them out and about, or even finding ways to accommodate someone’s personal preferences the next time they come to your place.

It’s those small acts that help us all get by. And if everyone did more of them, it would make a whole world of difference.