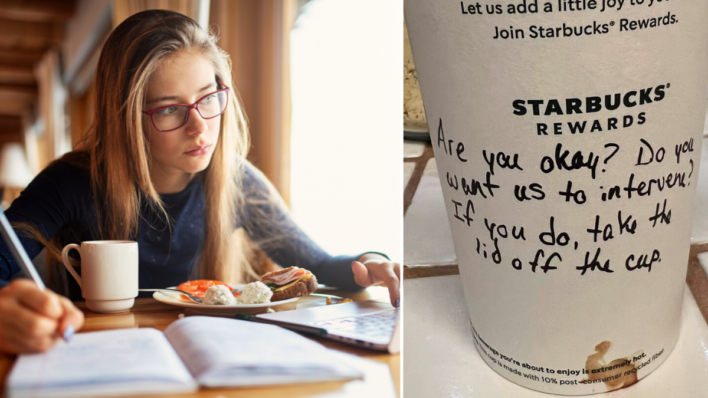 One Starbucks barista wrote a simple note to ensure a young girl’s safety. Now, that message is being heard around the country.
By Amber Dowling    March 1, 2022

One Starbucks barista wrote a simple note to ensure a young girl’s safety. Now, that message is being heard around the country.

Women never know when or how they may be harassed. But knowing there are vigilant and caring people in the world who are willing to step in, practice active listening, and help rather than ignoring the situation is downright inspiring.

Perhaps that’s why this motivating story of a teen in a Starbucks has gone viral.

Recently, an 18-year-old girl was at one of the coffee chain’s stores in Texas, studying by herself on a Saturday night when a man she didn’t know approached her.

“She wanted to get out of the house and go sit and study somewhere. She likes to go study at coffee shops,” the anonymous girl’s mom, Brandy Roberson, told Today. But on this particular night, an adult man came up and started chatting to her daughter quite loudly and wouldn’t go away.

“It sounded like he was quite animated. I believe this is what alerted the employees,” Roberson added in a Facebook post that has since been made private.

He had also not come in with my daughter, so they knew she probably did not know him.

Rather than escalate the situation by directly confronting the man or assuming he didn’t know the girl, however, employees working that night put their sharpies to good use and got creative with their communication skills.

A cup of comfort

According to Roberson, a barista came over and gave her daughter, “An extra hot chocolate someone forgot to pick up.” On the cup they had written the message, “Are you okay? Do you want us to intervene? If you do, take the lid off the cup.”

The gesture meant a lot to the teen, who communicated she didn’t feel safe. Once the man realized what was going on, he left, and all was well. Then, once the girl wrapped her studies, she returned home with the cup and immediately showed it to her mom.

“She was holding the cup and knew that I would love that someone did that for her,” Roberson wrote.

It made me feel so grateful that the Starbucks employees were watching out for her. As a mom, that is my worst fear that something would happen to my child and nobody would be there to help.

Roberson was so moved that she shared a photo of the cup, and the story has since been picked up by publications across North America. Before Roberson made her account private, the post received nearly 80,000 reactions, 57,000 shares, and more than 2,200 comments. The mother had no idea the act of kindness would travel so far and quickly, but she hopes it inspires others to also step up if they witness a similar situation.

“I absolutely feel safer knowing that people are watching out for others, especially teenage girls,” Roberson told Fox News. “I do not feel this was sexist in any way. I truly believe that they would have done it for anyone who was in a vulnerable situation, regardless of gender.”

Roberson’s message of stepping in to help others who appear to be in need is one that hits home. It’s easy to mind our own business when we witness an altercation or a person in an uncomfortable situation. But sometimes all it takes is a concerned question or a secret message on a coffee cup or napkin to help.

What’s so heartwarming about this particular situation is that the baristas recognized the teen might not be comfortable responding to a direct question about the man who was talking to her, and so they sent her that cup and directions on how to alert them to any problems instead. It’s a takeaway we could all learn from: By not escalating the situation, everyone remained safe.

According to the American Friends Service Committee, that’s exactly what you should do in situations where you see someone being harassed. Instead of a direct confrontation, make your presence known as a witness and take your cues from the person you believe is being harassed. Above all, don’t ignore it. “Silence is dangerous,” the committee writes. “It communicates approval and leaves the victim high and dry. If you find yourself too nervous or afraid to speak out, move closer to the person being harassed to communicate your support with your body.” After all, we’re all in this together.