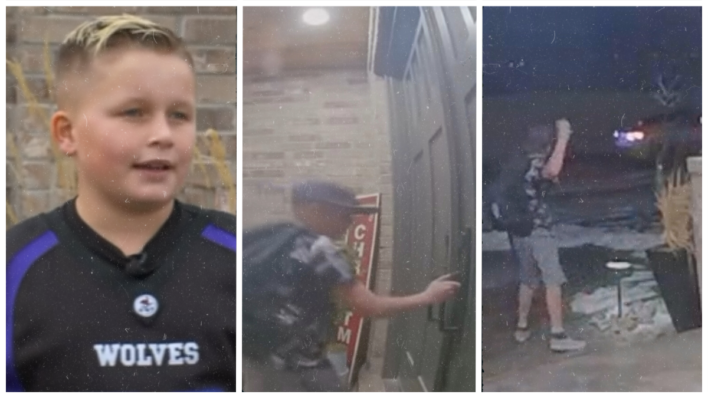 While using a familiar route to walk home, one young boy was confronted by three men who followed him in their car.
By Lindsey Staub    January 20, 2022

While using a familiar route to walk home, one young boy was confronted by three men who followed him in their car.

10-year-old Grayden Dowland was walking the 200 feet trek between his basketball coach’s house to his home- a path he took thrice a week- when he encountered something he did not expect.

While on his usual walk home, Grayden spotted three men inside a white sedan. The car full of strangers followed Grayden down the street and began calling out to him.

“They said, ‘Hi’ and I started walking faster,” Grayden told FOX13. “And they said, ‘Get in the backseat, we have some candy.’”

Afraid of what the men were planning, Grayden ran down the street until he reached he reached his own house.

The car continued to follow, even as Grayden reached his front porch. A doorbell camera caught the rest of the interaction on film, and what it shows is chilling. On his porch, Grayden looks around to see where the car is before he reaches for the door. As he turns the knob, he realizes the door is locked.

In a moment of panic, Grayden runs off the porch, grabbing rocks from the front yard on his way. He raises his arms, threatening to hurl a rock at the car, now just a few feet away. He then seized the opportunity to run to the neighbour’s house, where the door was thankfully unlocked. He went inside and locked the door behind him. However, the car refused to give up and entered the neighbour’s driveway to wait.

David Dowland, his father, was at a loss for words after Grayden’s harrowing experience. The family decided to implement some safety procedures to ensure such a situation would never happen again. Grayden will no longer walk home alone: either his parents will pick him up or his coach will escort him home.

It was really real. I saw the video and it’s gut-wrenching.

There are other ways to prevent stranger danger, such as warning your children not to engage with strangers and to run and scream if a stranger forces them into a car. According to the University of Michigan, children should always ask for permission before leaving the house and tell their guardians where they are going, how they are getting there, and for how long they will be gone.

Fortunately, Grayden was smart and brave when dealing with these strangers. He never gave up, even when realizing his front door was locked. Stay vigilant, like Grayden, and implement safety protocols so the vigilance never has to be put into practice.

BE AWARE OF YOUR SURROUNDINGS
There could be danger lurking around the corner, so keep an eye out for trouble.
Tags
Share
← Prev Post Next Post →