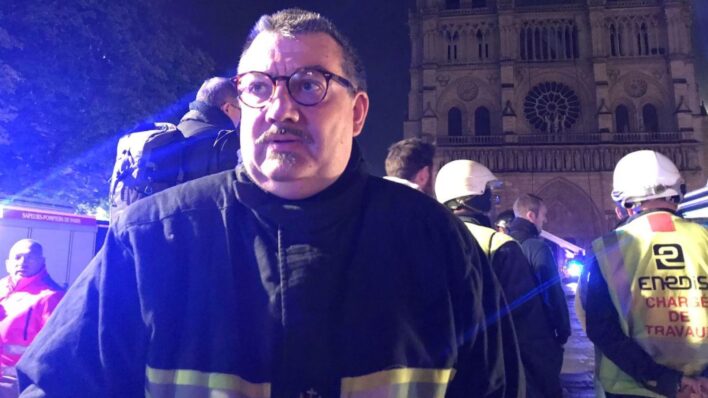 Brave Chaplain Runs Into Burning Notre-Dame to Save Priceless Relics

As the Notre-Dame cathedral in Paris burst into flames, the world watched helplessly; shocked and saddened about the history and
By Aly Walansky    April 17, 2019

As the Notre-Dame cathedral in Paris burst into flames, the world watched helplessly; shocked and saddened about the history and

As the Notre-Dame cathedral in Paris burst into flames, the world watched helplessly; shocked and saddened about the history and art that was being lost. Meanwhile, one man jumped to attention and tried to salvage the irreplaceable.

A French chaplain named Jean-Marc Fournier, who serves with the Paris Fire Brigade, ran into the burning cathedral and was able to rescue the Blessed Sacrament and the Crown of Thorns before they too were lost in the flames.

“Father Fournier is an absolute hero,” a member of the emergency services said. “He showed no fear at all as he made straight for the relics inside the cathedral, and made sure they were saved. He deals with life and death every day, and shows no fear.”

This is not the first time Fournier has risked his own life for the greater good.

In 2004, he served with the armed forces in Afghanistan as a chaplain, surviving a deadly ambush.

Fournier also bravely ventured the Bataclan music venue in Paris in 2015, after ISIS killed 89 people during an Eagles of Death Metal concet, to pray for those who had lost their lives and comfort those who were injured and grieving.

The items he saved from Notre Dame this week are priceless. The Crown of Thorns has been in Paris for almost 800 years now, and thanks to Fournier, it still remains.

A few other priceless artifacts were preserved, including the three iconic Rose stained glass windows from the 13th century and the Great Organ.

While the destruction at the Notre Dame is no doubt devastating, the stories of people rising in the face of tragedy and doing what they can remains so inspirational for all of us.