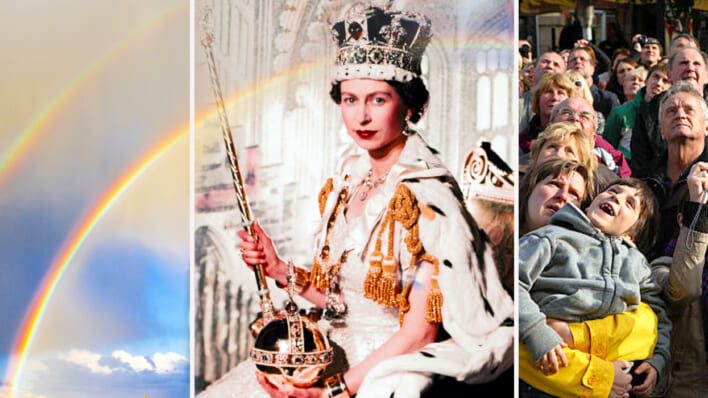 While a country grieved for the loss of its longest-reigning Queen, mourners were shocked and uplifted by a rare sign from the heavens: a double rainbow!
By Bryan Liquor    September 10, 2022

While a country grieved for the loss of its longest-reigning Queen, mourners were shocked and uplifted by a rare sign from the heavens: a double rainbow!

The loss of Queen Elizabeth II at 96-years-old marked the end of Britain’s longest-serving monarch, ending an historic 70-year reign.

Among the throng of faithful, both at the palace and across the world, were celebrities like Elton John, who said of the Queen on his instagram page, “She was an inspiring presence to be around, and led the country through some of our greatest and darkest moments with grace, decency and a genuine caring warmth.

“Queen Elizabeth has been a huge part of my life from childhood to this day,” he continued, “And I will miss her dearly.’ Dame Helen Mirren, echoed Sir Elton’s sentiment, writing, “I’m mourning along with the rest of my country, the passing of a great Queen. I’m proud to call myself of the Elizabethan age. If there was a definition of nobility, Elizabeth Windsor embodied it.”

Yet, as the world mourned, something magical happened that couldn’t have better symbolized the queen’s reign, or the memories many people around the world were sharing about her.

With the world at a low after the flag was lowered over Windsor Castle, something amazing happened to lift everyone’s spirits: a double rainbow suddenly appeared over Buckingham Palace, piercing the dark London sky.

It immediately went viral. To some, it inspired her once again meeting her soulmate.

“Prince Philip is waiting for his beloved 💔🌈🌈,” referring to the Queen’s husband of more than 70 years who passed away last year.

Yet for most, it was a glowing goodbye saluting the success of a beloved Queen. “A fitting bridge for her majesty,” posted one mourner; “A remarkable picture of her majesty’s life,” wrote another.

Why a Double Rainbow Represents Queen Elizabeth’s Legacy So Beautifully

In many ways, that rainbow perfectly exemplifies, visually, what made Queen Elizabeth so special.

Ever vivacious in her way and colorful in many others, the Queen broke gender roles with particular flare. During the second world war, she would serve as a mechanic and then a driver in the women’s Auxiliary Territorial Service, easily becoming the most active and visible among her family. Years later, in 2013, she helped pass the “Crown Act,” which promoted gender equality.

She’s also been a picture of strength and poise. Through three of her children divorcing, her home burning down, losing her daughter-in-law, and multiple attempts on her own life, she has remained a rock for a nation, and indeed a symbol for many to look up to when they need a colorful splash of color in an otherwise ominous sky.

But above all, her motivation always about serving her people.

I declare bfore you all that my whole life, whether it be long or short, shall be devoted to your service

And doesn’t that say it all? Through all the glitz and glamour, all you really leave is the mark you make on others. And through her life, Queen Elizabeth showed us all how to be successful: Keep your head high, have courage and live to serve others.

With a life like that, nothing can keep you from shining through even the darkest clouds.

KEEP READING:
How Queen Elizabeth’s Sweetest Moment Was Quiet but Perfectly Defined Her