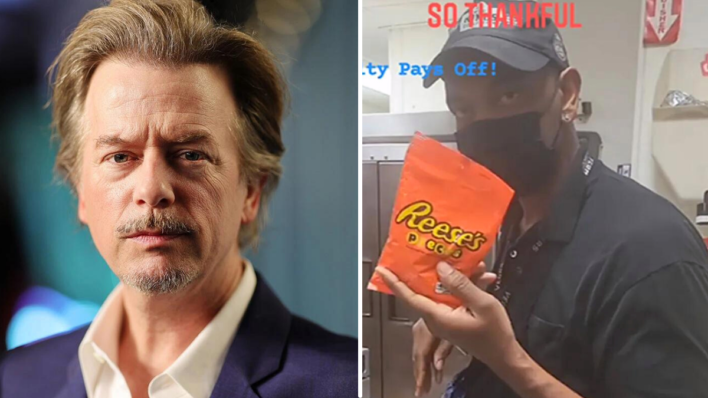 Man Who Worked At Burger King For 27 Years Receives Gift Bag With Only Few Things In It – Then, A Celebrity Steps In

When a fast-food employee went viral for a thank you bag he received from his employer, the community and one Hollywood star stepped up in a big way.
By Bryan Liquor    July 13, 2022

When a fast-food employee went viral for a thank you bag he received from his employer, the community and one Hollywood star stepped up in a big way.

It all started when a TikTok post went viral. The video captures 54-year-old Kevin Ford, who spent 27 years working as a cook and cashier at Burger King. The loyal employee said that he never once took a day off work.

To show its gratitude to Ford, the company gave him a plastic goodie bag containing a single movie ticket, a Starbucks cup, and some candy.

While commenters criticized it, Ford was nothing but classy and grateful for his gift, saying ‘thank you guys’ more than once.

But the cherry on top of this story was yet to come.

How A Daughter Asked A Community To Help Her Loyal Father

One person who felt that Ford deserved a bigger thanks was his daughter. And so, with that motivation, she created a GoFundMe page to help raise money for her dad’s career milestone.

“He originally began working at this job as a single father when he gained custody of me and my older sister 27 years ago,” she wrote.

She went on to mention the reality of his situation.

My dad continues to work here, because though he does look young, he is coming up on retirement age and leaving would cost him his retirement.

She said that while they aren’t expecting any money, but ‘if anyone feels like blessing him he would love to visit his grandchildren.’

As it would turn out, Ford would be blessed with that and so much more.

Why David Spade Stepped In To Help A Burger King Employee

The page was a smashing success, as donations topped $300,000. Among them was Saturday Night Live alum and comedy legend David Spade, who personally donated $5,000 along with some kind words.

One thing he was able to do was to visit his grandchildren in Texas. Donors were only too happy to help.

“Thank you for Your 27 Years of Faithful Service, You Are One of a Kind & Enjoy Those Beautiful Grandbabies..Florida Sends Love ❤ to You All,” posted one.

I am honored to donate to you. May your story be an example, that hard work does pay off. Enjoy your retirement. I am so happy for you!!!!!

How One Single Father Shows The Power Of Gratitude

In an interview with YouTuber Sierra Nicole, Ford said he was humbled by the outpour of love he had received.

I just love everybody. I think that it probably touched people because I think we as humans, period, just need love and gratitude.

It’s nice to see people from Hollywood to Hickory Avenue come together and appreciate a loyal employee at a time when so many frontline workers are ignored.

Yet, you can bet that Ford’s proudest success is being a loving, devoted father and grandfather. Whether it’s in the kitchen or among family, knowing that we’re valued is the greatest gift.