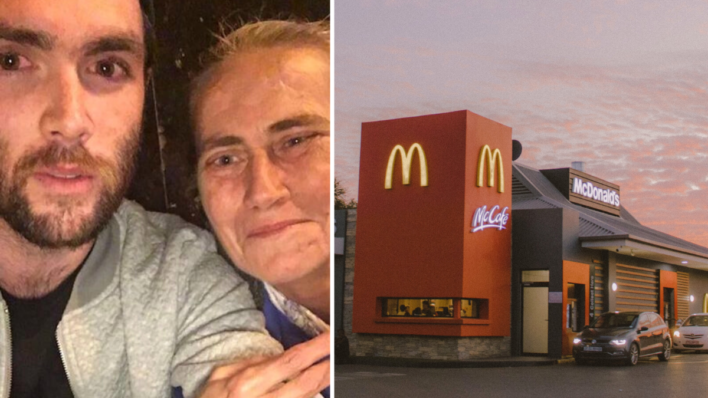 In a story that will make us all think twice before walking by someone down on their luck, one man shows us all what a real Happy Meal is.
By Bryan Liquor    May 25, 2022

In a story that will make us all think twice before walking by someone down on their luck, one man shows us all what a real Happy Meal is.

Jonathan Pengelly of Cardiff, Wales was doing what we’ve all done countless times. After a night out with his buddies, he stopped by McDonald’s for some late-night eats.

On this night, the lineup was longer than usual. According to The Daily Mail, when Pengelly looked to see what the hold-up was and he couldn’t believe his eyes. There was an employee, refusing a warm cup of water to a homeless woman.

I don’t know what was going through their minds but a lady, clearly homeless was asking for a basic human right; and for a multi-billion pound company, for them to say no is disgusting!

Seeing that the woman — whose name was Polly — was weak, Pengelly offered to buy her some food. To his surprise, she only asked for a cheeseburger.

That act would set in motion a night that would leave both of their lives forever changed.

What One Stranger Did to Change a Homeless Woman’s Life

Sitting with Polly, Pengelly was so distraught by what he saw that it brought him to tears.

I couldn’t just leave this lady go, she was so warming and so lovely. So I sat with her, on the cold hard floor, in the middle of winter and you know what I did? I cried my eyes out.

After thinking for a moment, Pengelly made Polly a shocking offer: Would she and her friend like to be his dinner guest? She gladly said yes. There, Pengelly cooked them enough food to last a few nights. He also let them have showers and brush their teeth.

Pengelly wrote that Polly and her friend told him that, “they have never felt so appreciated in their life.”

The two have kept in touch, with Pengelly promising to do everything he can for her, which has included giving her blankets, pillows and food.

In his closing words, Pengelly wrote that he hopes his story will cause people to rethink how they perceive those on the streets.

If you see someone on the streets, don’t look down on them like they’re nothing. You don’t know what they’ve been though! Spare a little thought!

With some self-reflection, how many of us are one or two bad turns away from being in Polly’s shoes, needing a slice of pizza, or a glass of water? What impact would that small act of kindness have on us?

Maybe keeping that in mind will give us the motivation to warm someone’s cup instead of giving them the cold shoulder.