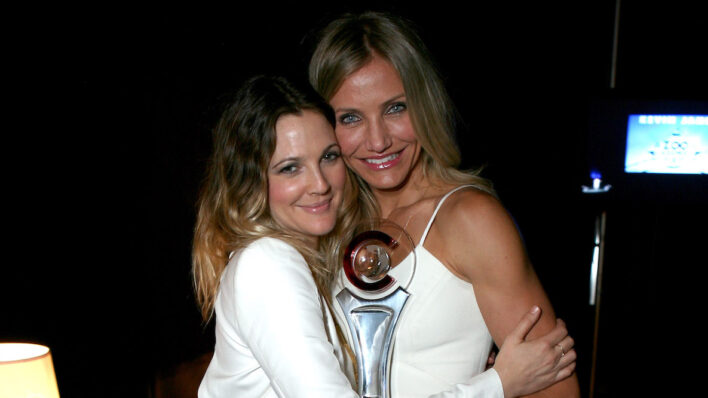 Cameron Diaz and Drew Barrymore’s friendship has not only defined the test of time, but also proves the power of authentic connections.
By Shaoni Das    July 13, 2020

Cameron Diaz and Drew Barrymore’s friendship has not only defined the test of time, but also proves the power of authentic connections.

Do we all remember Charlie’s Angels? For better or worse, the franchise became a bastion of female empowerment. You could make the argument that it was a representation that was very much designed on terms set by powerful men and you would probably be right.

But rather than speak on the plotlines or stylistic choices of the film itself, it’s worth looking back on an epic friendship that solidified on set. Cameron Diaz and Drew Barrymore are two actresses you might not hear about much anymore, but it’s undeniable that these beautiful ladies absolutely ruled the nineties with their star power.

They were charming, talented, stunning, intelligent and just a little intimidating — a perfect combination for the A-list celebrity, if you ask us.

But whereas many female friendships in the industry are known to gradually dissipate over the years, these two have stuck the landing. Going thirty years strong now, they defy the odds and continue to be a pillar of support for each other through thick and thin.

Drew has been remarkably candid about her state of mind following the divorce. Though she and her ex-husband Will Kopelman are co-parenting their two young daughters and are on amicable terms at the moment, the divorce took a hard toll on the two of them.

Drew said that she felt like she was the “biggest failure.” She wanted to raise her two children as part of a traditional family, an idea she felt was ruined by the divorce. She said she was in a “very dark and fearful place” as she was going through the process and had lost 40 pounds as a result.

However, she was able to pick up the pieces of her broken heart and get back on her feet. Her tip on getting through dark times: female friendships.

I have a long-standing history with my girlfriends. They are my original family. You cannot accomplish anything by yourself. It takes this village.

Cameron became her friend’s rock during that time

One of those girlfriends that rushed to her when news of her divorce broke was none other than Cameron Diaz. Cameron knew right away that it’s all hands on deck when someone in the squad is going through rough times. In her mind, it didn’t even need to be said that she had to be there for her friend during her time of need.

Everybody pulls the wagons around, you know, our friends, whoever needs us in whatever point in time. Even if it’s something that the public doesn’t know about. Internally we’re all going, like, ‘OK, who needs us now?’ And that really is, I think, a major part of the connectivity we need. We need to keep those things connected.

Even Drew specifically acknowledged the part Cameron played in boosting as she was going through a nightmare of a situation. The caption for the photo said it all:

Getting out of your house with your girlfriend. And being a whole person, with your sister. Remember to spend a moment with the ones you love in your busy life. She has made me feel beyond beautiful. Always has. Always will. #thankgodforyourfriends. They rejuvenate and confirm everything.

Cameron stormed off when asked about Drew’s drug addictions

Drew’s struggle with drugs when she was younger is a popular point of conversation among media outlets. But Cameron wants no part of it.

At a press junket, Cameron was discussing her latest movie and agreed with the host’s suggestion that her daughter in the film is just like Drew Barrymore. She meant that the character is just as “bright” and “lively” as Drew.

But then host veered off, saying that it’s best to hope the daughter character doesn’t go through the “drug years” like Drew. Cameron was not having it; she immediately called him out and spoke out in defense of her friend.

I’m sure, Kyle, you’ve never been through a drug phase, have you? Or alcoholism or anything like that? Pretty clean… always did it right? Congratulations.

Cameron basically told him the interview was done at that point and proceeded to walk out. Her actions during the interview spell out how she’s willing to go against the grain and create a tense situation just so she can defend her own friend.

Those are just some specific examples. There have been countless occasions in which the ladies were seen being there for each other. From serving as bridesmaids at each other’s weddings to Cameron being there ahead of Drew’s first baby’s birth, the two are basically ride-or-die.

Drew even revealed that if she was ever in jail, Cameron Diaz would be her one call. “Not that any one of us are going to jail anytime soon,” Barrymore sepcified. “But 100 percent. She would, like, get in there and get you out.”

Earlier this year, Cameron welcome her first child via surrogate with her husband Benji Madden. The name of their daughter raised a few eyebrows and for reasons, you might not expect. The name is Raddix Chloe Wildflower Madden. Immediately, some outlets determined an unusual connection in that Wildflower is also the name of Drew Barrymore’s biography.

Neither Cameron nor Drew has confirmed but it’s safe to say their motherhood hasn’t been keeping them from spending time with each other. The moms were spotted partying and chilling at a bar as recently as January 2020.

When talking about a recent photo she shared of the two of them, Drew explained their relationship is far stronger than the average female friendship publicized in Hollywood.

She’s in my life every day…Her and I are like sisters and we see each other all the time and it was just sort of where we are today. In some ways just another day in our world, but I felt like sharing it. I love her.

Though this friendship is giving us the most wholesome feelings, we must talk about how this is rather an exception in the industry. In Hollywood, women are pitted against each other on a daily basis. They’re made to feel envious of each other, they’re forced to compete against each other, and the press cycles work together to breed animosity, hostility or passive-aggressiveness among the women.

The fact that these two women have been able to maintain an epic friendship for thirty years running is a remarkable achievement in and of itself. The fact that they’ve been able to do it amidst divorces, drug addictions, break-ups, marriages, and children is just the cherry on top. They serve a model to not only other female celebrities but to women in general: if you’re lucky enough to know who your best friend is, be there for her and never let her go.

Find your tribe and stick with them

Friendships can be just as difficult, if not more, to navigate as romantic relationships. For starters, there are no fixed definitions of what is or isn’t a friendship. It’s not something two friends talk about — they’ll be friends without putting a label on it. Secondly, there is no standard for acceptable behavior within a friendship, either. You can spend every day with them or you can spend one day a year with them; they’ll still be your friend.

All that might make you feel confused as to how you’re supposed to keep friends around. But really, if you think about it, spending time with a dear friend is probably the easiest thing in the world. You just have to find your crew of friends, whether that is one friend or twenty, and promise to stick with them. You have to trust them to be your rock but you also have to return the favour when the time comes.

It’s not a mutually beneficial relationship; it’s a collective feeling of unity and togetherness that never changes. It never changed for Drew and Cameron; the two always knew to stick close to each other and be solid support systems for one another. Once you find your magical friends(s), there is very little in life you can’t get through.