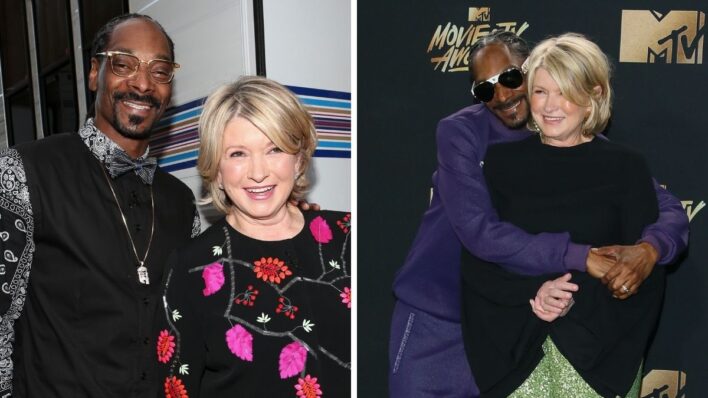 Martha Stewart and Snoop Dogg, who now share a cooking show, became best friends against all odds and charmed the world with their friendship.
By Kayla Matthews    December 18, 2019

Martha Stewart and Snoop Dogg, who now share a cooking show, became best friends against all odds and charmed the world with their friendship.

It is always reassuring to know that we have the power to choose our friends. And sometimes, the choices others make can surprise us. One such unlikely, but perfectly matched friendship is the connection between the iconic rapper Snoop Dogg and lifestyle mogul Martha Stewart.

A successful rapper, Snoop has been in the music industry since 1993 but also has an extensive filmography under his belt. On the other hand, Martha has been dominating in own her lane as an immensely successful business woman despite having served time in jail for a felony.

Their hilarious banter makes for a fun watch whenever you tune into their Emmy-nominated cooking show — or any of their numerous appearances together. The saying “opposites attract” has never been truer. Who would’ve thought these two personalities would mesh and create pure magic on the screen?

If you don’t know much about either of them, you may wonder how these two met. Let’s kick things off from the beginning and see how this friendship developed.

How Snoop and Martha met

This feel-good friendship began over a decade ago in 2008 — time flies. Snoop guested on Martha’s first cooking show, The Martha Stewart Show, to help her whip up a delicious mashed potato recipe.

Martha reached out to Snoop and invited him onto the show, unknowingly beginning the start of a long friendship. Snoop taught her some of his favorite slang during the episode, including terms that sound ironically outdated now, like “fo shizzle”.

The pair reunited in 2009 to make a batch of chocolate brownies for Christmas. Snoop and Martha riffed off each other with hilarious quips, including an impromptu rap about baking pastries. Can you name a better combination than music and food?

Martha made the next move

Though this friendship looked promising from the start, Martha and Snoop fell out of touch for a few years after his appearance on her famed talk show. Fortunately, this story has a happy ending. Distance does little to break the strongest bonds.

In 2014, Martha held an Ask Me Anything session on the popular social site Reddit. Fans flock to these celebrity info-sessions where they get to ask their favorite stars questions about their lives.

Someone asked about her friendship with Snoop, where she expressed her desire to be closer friends with the Californian rapper.

Little did she know her wish would come true only a year later.

If you never believed in fate before, start rethinking! Who knows how your next lifelong connection may come about?

Fate wanted their friendship to happen

The duo met again in 2015 on the set of Comedy Central Roast, where the roastee of the night was Justin Bieber. The two reconnected over each other’s witty remarks about the then teen idol.

Snoop was in awe of Martha’s sense of humor, calling her the funniest person of the night. It wasn’t long before their rekindled friendship led to big plans in the entertainment industry.

In that moment, I knew I wanted to be alongside this lady for the rest of my life.

2016 marked the year that Martha & Snoop’s Potluck Dinner Party premiered on VH1. Both stars were enthusiastic about working with each other on such a major project, and viewers were equally stoked. The show experienced a lightning-fast rise to popularity, scoring an Emmy nomination for Outstanding Host for a Reality Program in 2017.

Their surprising reunion offers an awe-inspiring takeaway for all fading friendships — don’t give up hope. Even if you’ve lost communication with a friend, you can reach out and mend things over again. It’s worth a try, and you’ll regain a valuable connection if things work out.

Martha and Snoop Dogg brought their friendship to the screen

Now dubbed Martha and Snoop’s Potluck Party Challenge, the show has shaken things up by introducing a new format in 2019. Martha and Snoop team up with their guests to decide which groups can create the best culinary dishes. From Friendsgiving meals to Halloween treats, there’s no shortage of foodie delights on this show. The winning team receives the Potluck Party Platter prize — try saying that three times fast.

The pair has filmed hilarious promos for their cooking show, including parodies of the films Titanic and Ghost. The latest season has featured guests like Paris Hilton, the Jonas Brothers, Tiffany Haddish and many more. The show is no-doubt a star-studded affair and will hopefully live on for many more seasons— we just can’t get enough of these two.

As you may already know, Martha isn’t the only one with a knack for creating great meals. In 2018, Snoop Dogg released his first cookbook, From Crook to Cook: Platinum Recipes from Tha Boss Dogg’s Kitchen.

And never too far behind, Martha contributed a thoughtful foreword — friends who cook together stay together. If you’re ever in the mood for gin and juice, baked mac & cheese or fried bologna sandwiches, you know where to look.

An unlikely but inspiring friendship

Martha talked to the Hollywood Reporter in 2018 about her friendship with Snoop and their show’s booming success. There’s no question that she views the program as a way for different cultures to mix in harmony and respect.

Differences aren’t bad — embracing these contrasts adds flavor and depth to life. Learning from others and sharing experiences with unlikely acquaintances allow you to step outside the box of societal expectations.

When we come together, it’s a natural combination of love, peace and harmony.

Contrasting personalities can bring out the best in one another. The world would be a much better place if we all practiced loving, learning and sharing. Thankfully, Martha and Snoop are way ahead of the game.

Friends come in all forms

If there’s anything we can glean from this fabulous friendship, it’s that you can share an interest with virtually anyone. Even if you meet people who live entirely different lives from yours, you can still make loving, rewarding connections.

The most beautiful aspect of human nature is the ability to connect with others — we all need social ties to thrive. Though we’re different, we also share the human condition. By opening up to difference, we can form bonds that allow us to flourish and experience new facets of the world.