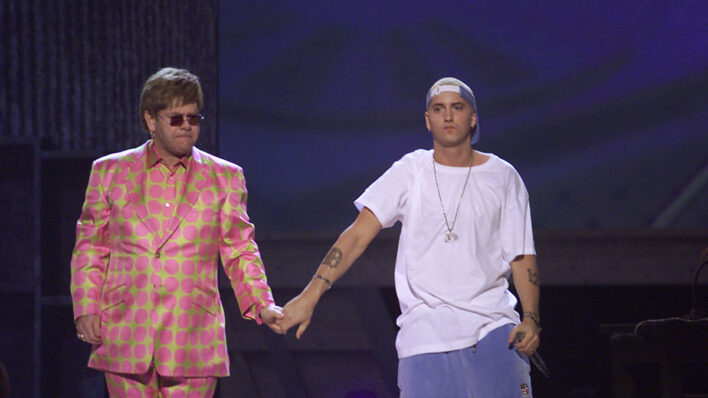 How Did Elton John Save Eminem’s Life?

Elton John and Eminem’s unlikely friendship has endured for more than a decade, through controversies and life-threatening addictions.
By Aly Walansky    November 28, 2019

Elton John and Eminem’s unlikely friendship has endured for more than a decade, through controversies and life-threatening addictions.

Eminem and Elton John are both known for being powerhouse musical talents, but it turns out they have something far deeper and darker in common: a history of addiction, and a long journey down the road to recovery.

In 2007, Eminem, much like Elton John several decades before, nearly died from a drug overdose. At the height of his stardom, he developed an addiction to prescription medication.

At the time, he was taking “up to 30 Vicodin a day”  and once was rushed to the ER after taking the equivalent of “four bags of heroin.”

That’s as serious as it gets– so how did he survive?

How did Elton save Eminem?

A new biography by Anthony Bozza entitled Not Afraid: The Evolution of Eminem, reports that after several overdoses, the rapper and actor reached out to pop legend Elton, who came to his rescue.

“As a fellow musical superstar with nearly 30 years of sobriety under his belt, Elton John was the perfect mentor to help guide Marshall,” writes Bozza. (Enimen’s real name is Marshall Mathers.)

“The two started on a program of weekly check-ins and grew very close.”

This isn’t the first time this recovery journey has made it to social media and the airwaves. Eminem even talked about it openly in the documentary How To Make Money Selling Drugs, released in 2013.

How the unlikeliest friendship blossomed

Elton and Eminem developed a close friendship, even though Eminem had a history of controversial lyrics that referenced homophobia.

“I really didn’t care. But being that he was gay and he had my back, I think it made a statement in itself saying that he understood where I was coming from.”

And Elton was just the person to help Eminem as things got dark.

“Some days I would just lay in bed and take pills and cry… I needed pills in my body just to feel normal, so I would be sick. It was a vicious cycle,” Eminem has admitted.

How did Elton become Eminem’s sponsor?

Elton himself overcame a cocaine addiction in the 1980s and is now Eminem’s sponsor for his recovery.

“I’m Eminem’s AA sponsor. Whenever I ring to check in on him, he always greets me the same way: ‘Hello, you [expletive]’, which I guess is very Eminem,” John told The Telegraph.

A friendship that began with a duet at the 2001 Grammy’s has become a lot deeper over the years.

“When I first wanted to get sober, I called [Elton] and spoke to him about it,” said Eminem to The Guardian in 2009. “He’s somebody who’s in the business and can identify and relate to the lifestyle and how hectic things can be. He understands… the pressure and any other reasons that you want to come up with for doing drugs.”

I reached out to him and told him, ‘Look, I’m going through a problem and I need your advice.’

It’s a friendship that has survived decades. Elton refers to Eminem as a “dear friend” and gushed about his talent and artistic skills while hosting the Apple Beats 1 show “Rocket Hour”. In a fascinating read, a phone interview between the old friends was shared by Interview Magazine.

“Your sobriety day is in my diary. I’m so proud of you,” Elton says to Eminem in the interview.

I’m so happy you exist in the world, and I’m just so proud of you. You’ve worked so hard on yourself, and no one deserves this more than you, Marshall, and I love you from a long way away, okay?

Eminem responds, “Thank you, Elton. I love you, too.”

It’s a true friendship built to last, one that we can all learn a great deal from.

Eminem and Elton overlooked their obvious differences– age, nationality, musical style, sexual orientation– and were able to connect on a very genuine level thanks to their shared experiences.

Both men have acknowledged that the moment their lives changed for the better were when they finally admitted:

Having the bravery to admit when they needed help made it possible for both Elton and Eminem to continue shining as icons in the music industry. They fought their addictions and came out the other side stronger and ready to help others going through the same things.

Only you can make the decision to seek help and change your life– are you brave enough?