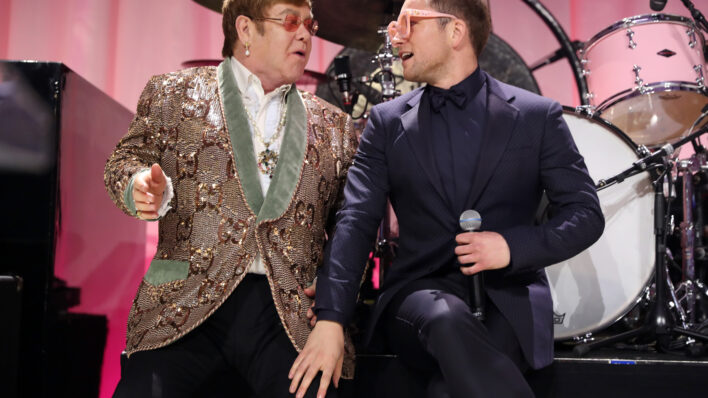 5 Daily Habits to Steal From Elton John, Including Knowing When to Stop

Formally known as Sir Elton Hercules John CBE, this English-born singer-songwriter, pianist, and composer has been dazzling generations for the
By Lindsay Tigar    June 7, 2019

Formally known as Sir Elton Hercules John CBE, this English-born singer-songwriter, pianist, and composer has been dazzling generations for the better part of his life.

Born as Reginald Kenneth Dwight in the late 1940s, Elton John has sold more than 300 million records in his tenure, cementing his spot as one of the most beloved and renowned performers in history.

Some other impressive feats? He’s had seven number-one albums in the United States, 58 Billboard Top 40 Singles, 27 Top 10 singles and more than fifty Top 40 hits. He’s part of the Rock & Roll Hall of Fame, and he’s not only won five Grammys but was given the Grammy Legend Award, too.

With an estimated net-worth of $500 million, John is known for his humble attitude and charitable perspective. While you may know every lyric to every song he’s released, you probably aren’t aware of these surprising habits and perspectives that have made John the star — and incredible human — he is.

Here are some habits to steal from Elton John:

He admits his failure

Artists will often share how alive they feel when they’re performing, but how different it feels to be offstage, and out of the limelight.

For John, his happy place was always in front of an audience — but once the lights dimmed, he felt insecure. He wanted to be perfect until he realized what a gift it was to simply be himself.

As he shared at the World Economic Forum, he had to fall short to build his strength: “But once I attained these bounties, I began to lose them and, even worse, I began to lose myself. My essential humanity began to dissolve into an excess of drugs and alcohol. Fame, which at first sight looks like a blessing, soon revealed itself as also a curse. I am afraid I reacted very badly. I became a loathsome person – selfish, self-centred, and disconnected. That amounts to a painful second lesson, one I learnt by doing it all wrong. A good leader has a moral integrity that survives both success and failure.”

He follows his passion

When you think back on your life, there are likely moments where the stars aligned, your heart felt full of fire, and you knew you were doing what you were meant to do. For John, it was when he was three years old and he heard Elvis Presley for the first time — and something clicked inside of him.

It’s what he recommends to all people attempting to navigate their career: discover the thing that moves you and chase it as fiercely as you can.

“The first lesson I have learnt is the importance of finding, and following, a passion. In this respect I was fortunate from the start,” he shared at the World Economic Forum. “There is never a straight line to success and there wasn’t for me. My father, for example, thought that pursuing a career in music was an outrageous, unacceptable thing to do. But I wasn’t to be deterred. I stuck at it and I found that I loved it. It offered joy and material abundance beyond my wildest dreams,” he explained.

He acknowledges when it’s time to stop

His longtime partner and husband, David Furnish, has been a solid, steady force in John’s career, allowing him to be vulnerable and genuine. It was a conversation with his love that finally gave him permission to admit that perhaps, he was pushing himself far too hard. After all, even when you love what you do, if you work so hard that you lose track of the beauty along the way, what’s the point?

John detailed this conversation during an interview with The Guardian. “I’m addicted to working. I mean, I have a list of 100 countries I want to play in. I’m basically killing myself by travelling so much, for no reason whatsoever… It’s like, if I do 120 shows in a year, I want to do 130 the next year. I’m very proud of doing over 200 flights a year. Why are you so proud? It’s fucking killing you. After I was ill, I sat down with David and had to admit to my addiction: ‘David, I can’t stop working.’ I always run away with it. The horse bolts, like with the cocaine and everything like that. So it’s just a wonderful wakeup call.”

He relied on himself to get through tough moments

After battling various forms of addiction for years — alcohol, cocaine, you name it — it was a tragic death that set John on a straighter path. In 1990, his friend Ryan White died of AIDS and it made John see how selfish his choices had been up until that point, and how important it was to make a change.

In an interview on 60 Minutes, he recalls that experience as when he knew he had to get sober or he would die, too. He checked into rehab, and was able to recover, eventually writing “Someone Saved My Life Tonight” as part of his healing process. When defining this hit song, he described: “It’s how friendship can save you in a fleeting moment. There were many of those.”

His family motivates him

John and his partner didn’t start their family until much later in life but his children — two boys — serve as his inspiration and biggest love. “I’ve never experienced anything like it, being a father and being a parent. There’s no contest. I’d rather be with my children than playing shows,” he told Good Morning America.

Even so, it wasn’t quite the journey he anticipated. In an interview with Ellen, he put it like this: “If you’d had said to me 10 years ago I’d be sitting on your show married to the man I love and have two beautiful children I would have said, ‘You put acid in my drink. But life throws you challenges and life throws you curveballs — and great curveballs. These two children have come along at a time I never thought I’d have children. They are the greatest thing in our lives.”