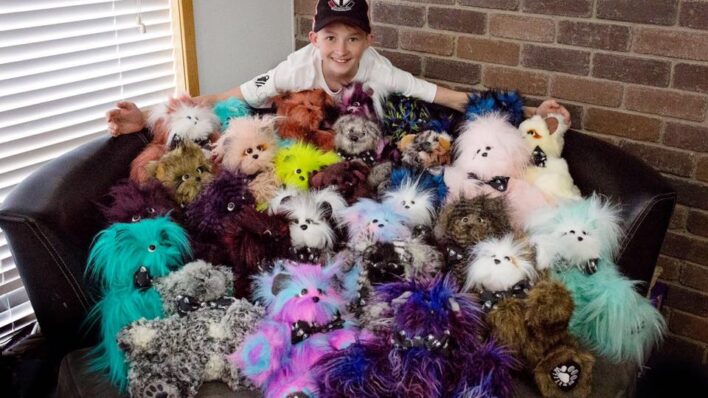 Campbell Remess was only nine years old when he asked his mom to buy toys for sick children spending Christmas
By Eliza Theiss    April 16, 2018

Campbell Remess was only nine years old when he asked his mom to buy toys for sick children spending Christmas in hospitals.

But with a large family to support, buying presents would have been far beyond the Tasmanian family’s tight budget. So Campbell took matters into his owns hands and sat down to use mom Sonya Whittaker’s sewing machine. More than four years later, Campbell has made nearly a teddy bear a day, using his sowing skills to touch thousands of lives and families across the globe.

Now, the Australian native is almost 14, and his enthusiasm to help others has only increased. He has his own charity, Project 365, which focuses on sending out thousands of “comfort bears” to provide emotional support to families with sick children, people battling cancer, as well as “overseas bears” for survivors of violent events like terrorist attacks.

One of 9 siblings, Campbell grew up conscious of social responsibility and the power of sharing. He also knows what cancer can do to a person and family – his father beat cancer four times and was one of the earliest recipients of the boy’s teddies.

And Campbell’s activism doesn’t stop at making teddy bears. He organizes cruises for cancer survivors, known as Kindness Cruises, as well as fundraiser dinners and galas to help fund cancer research. Campbell’s selflessness has earned him widespread appreciation from international stars and media outlets, as well as public recognition within the Australian Senate.

Last year, the teenager also decided to raise awareness against bullying after hearing the story of a British seven-year-old who ended up in the hospital with severe injuries after been attacked by his bullies.

The story hit very close to home, inspiring Campbell to create a new line of bears – the “hero bear.” Campbell was once the target of bullies. Adults didn’t intervene in time, and he ended up with a broken bone. He switched schools since, and as mom Sonya told ABC News, “Sometimes it’s stronger to actually walk away from them and start somewhere else.”