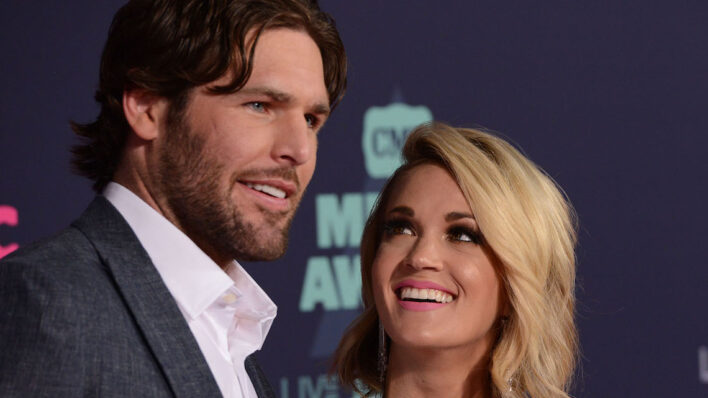 Carrie Underwood and Mike Fisher’s romance might never have happened had she not taken a chance on being set up with him. The rest is history.
By Barbara Pavone    May 8, 2020

Carrie Underwood and Mike Fisher’s romance might never have happened had she not taken a chance on being set up with him. The rest is history.

In 2005, Carrie Underwood’s professional life changed forever when she won the fourth season of American Idol. Almost overnight, she became a country superstar and, as of October 2019, had a whopping 27 No. 1 singles to her name.

A few years after that momentous reality TV moment, Carrie had another life-altering experience when she was introduced to her future husband in 2008. An introduction that almost didn’t happen…

Here’s what we can learn from Carrie Underwood and Mike Fisher’s very real romance:

You should always be open to new connections

If Carrie had only listened to her mind and not her heart, she might have missed out on true love. That’s because when her bass player, Mark Childers, told her he wanted to set her up on a blind date with his friend, Canadian professional hockey player Mike Fisher, she wasn’t so sure.

For one, there was the distance. While the songstress was living in Franklin, Tennessee at the time, Fisher called Ottawa, Canada home and she just didn’t think long-distance made much sense.

I mean, can I make dating more difficult? Let’s get a hockey guy who lives in another country. Awesome.

Carrie Underwood to VH1 Behind The Music

And yet, something inside her told her to remain open to the possibility of love and so, she agreed — but on her terms. “I’m like, we’re sticking him in meet-and-greet because if he’s weird, I don’t wanna do it,” she admitted. And that’s when she learned an all-important lesson: even the smallest decision, one which might seem totally insignificant at the time, can have a lasting impact on your life.

The pair made quite the impression on each other. As Fisher gushed, “The first time I saw her, she was more beautiful in person than on TV.” Carrie felt the same way: “I text[ed] my bass player, ‘Hot, hot, hot’ cause I thought he was cute!”

So they went out after their backstage encounter and, as Fisher recalled, he had an “aha” moment during dinner.

As we were talking, she started eating my dessert. That’s when I kinda knew that things were going OK.

Following their first date, the couple exchanged numbers and, as Underwood told VH1, “We started talking on the phone quite a bit for the next, like, three months.”

Despite the physical distance between them, they were getting closer every day. As Fisher explained, “We have a lot of the same values and beliefs and we just got along really well and we were a real good fit.”

In fact, their bond strengthened so much during their time apart that Underwood now credits the distance she feared with helping their relationship bloom.

“It’s fun to miss somebody,” she told Glamour [via Taste of Country]. “We talked on the phone for almost three months before we actually got together — that was good for us. Then our first real date was on New Year’s Eve, and our first kiss was when the ball dropped,” she remembered.

Like their initial encounter, their ultra-romantic first kiss might not have happened had Carrie not decided to just go for it.

We were in front of people, and he’s not a big PDA guy. I figured, I’ll go in for it because he can’t leave me hanging, right? So I made him kiss me in public!

And while 2009 kicked off with their first kiss, it ended with an engagement on December 20th. Not wasting any time, the lovebirds tied the knot just a few months later at Georgia’s Ritz-Carlton Reynolds Plantation in July 2010. But despite saying “I do”, it would be several more months until the couple could start living together.

Trust is absolutely everything

Following their nuptials, Carrie went back to her home in Nashville while Fisher returned to Canada to continue playing hockey for the Ottawa Senators. Then, in February 2011, their biggest wish came true when Fisher was drafted by the Nashville Predators.

“To be honest, I was praying a few days before about [moving teams],” Fisher told the Vancouver Sun [via People]. “I was just so frustrated and said ‘God, if you have me go somewhere take care of it, look after it,’ and he sure did that. He put me in a place I was comfortable with and I think that’s part of the reason that this is the place I’m supposed to be,” he admitted.

Opening up about how they were able to make their romance work without having to sacrifice their careers, Carried revealed it’s all about trust.

Speaking with Glamour in 2012, she explained, “Any guy I’ve ever dated, there would always be that doubt: ‘He didn’t answer his phone. What’s he doing? It’s late.’ I’m not the crazy-girlfriend type, but there was a little voice in the back of my head,” she continued.

I don’t have to worry about Mike. I don’t think twice. He’s going out? I don’t care; it doesn’t bother me. I don’t bat an eye.

Having fame in common also helped. “A plus is, he knew what to expect,” she added. “In Canada, he was a big celebrity, so he knows what it’s like living under a microscope. And he travels a lot, which is good for both of us,” she went on. “We’re both independent people, so we can’t have somebody around 24 hours a day, seven days a week.”

Support your partner through good and (especially) bad

In February 2015, Carrie Underwood and Mike Fisher experienced one of the happiest days of their lives when they had their first child, Isaiah Michael Fisher. In January 2019, they welcomed his baby brother, Jacob Bryan Fisher, but their road to parenthood wasn’t an easy one.

In September 2018, the “Cry Pretty” singer revealed that she had suffered three miscarriages in two years before getting pregnant with Jacob.

And to have somebody so even-keeled, he was my lifeline, keeping me grounded.

He was also the “most doting, amazing husband,” organizing weekly date nights, “reading a bunch of parenting books, rubbing Carrie’s feet and making sure she is happy and comfortable at all times” throughout her pregnancy with Jacob.

Despite the ups and downs, the couple draws strength from each other and their growing family. As Carrie told E! News, “He’s such a great dad and he’s so supportive of what I do and I’m supportive of him and we just love our little family.”

The feeling is mutual. “I admire Carrie as a mom most,” the former pro-athlete told People. “She is so good with our boys and loves us all so well.”

I would say our marriage has gotten better since kids. I love seeing my wife as a mom.

Even the most loving relationship requires work

No matter how great your relationship is, it will require work and Carrie Underwood and Mike Fisher understand that. For example, there are times when fame gets in the way, but they know that they can always count on each other.

“There’s so many people around us, sometimes there’s just not a lot of us together,” Mike told Dad Tired. “I think one of the big strengths of our marriage is the trust that we have. She knows, and I know that, regardless, we’re in this together.”

I had dated guys and kind of knew, like, ‘No.’ Nothing was ever really wrong, but nothing was really right either. With him, it was like a good partnership. It was an easy relationship to be in.

Another weakness? Communication. “That’s one of things I think I need to improve upon: communicating really well with my wife,” Mike admitted on Dad Tired while Carrie told People, “We’re always working on our communication, you know, that’s life.”

An impactful connection can happen anytime. It’s normal to question things or feel unsure, but you should never close yourself off to the possibility of a new relationship simply because you think it might be difficult. If Underwood had done that, she may have never arrived at the wonderful, loving place she is today.

Because, despite all of her initial apprehension and all of the hardships that followed (from long-distance dating to a heart-breaking parenting journey), there’s one thing she’s always been sure of: “I feel like he is the person I was meant to be with.” And all because she decided to give one short backstage meeting a chance.