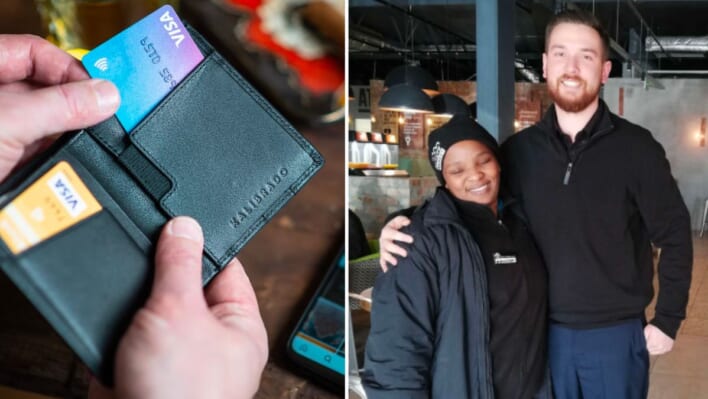 When an act of kindness starts a chain reaction.
By Carl Wordsworth    October 29, 2022

When an act of kindness starts a chain reaction.

As economic conditions continue to tighten around the world, many are all too familiar with the dreaded feeling of financial anxiety. The cost of groceries continues to rise, filling up a car with gasoline is becoming more of a burden, and rent prices seem to be skyrocketing without an end in sight.

On July 3, 2019, in Somerset West, South Africa, one such case seemed to play out in real time when Brandon Britz visited his local supermarket. While picking up his monthly groceries at Food Lovers Market, Brandon saw the dreaded “card declined” as he checked out. Brandon tried swiping again, which went on for a while, until he asked the cashier if he could draw the money from a local ATM.

A Cashier and her Unexpected Act of Kindness

After being greeted with an error message there as well, Brandon tried to transfer money to a friend he was with, as a last ditch effort. This too would prove futile and Brandon began to feel that familiar financial pressure as he realized he was unable to pay for the groceries he had already gathered and brought to the register.

RELATED: McDonalds Cashier Pays for Customer’s Meal Who Forgot Her Wallet – Little Did He Know She Was Going Hungry

Fortunately for Brandon, the cashier– Nolitha– had been watching the situation unfold, sensing Brandon’s frustration. Despite never meeting Brandon before, Nolitha offered to pay the full amount of Brandon’s groceries, encouraging him to take the food home as it was late. Struck by the kindness of a stranger, Brandon was nearly brought to tears, and gave Nolitha his contact info– assuring her he would be back the following day to pay her back.

The Ripple Effect of Nolitha’s Gesture

After returning to the Food Lovers Market and paying Nolitha back, Brandon could not stop thinking about the gesture. He had never met Nolitha before, let alone been to that supermarket– yet was shown a level of selflessness and empathy that restored his faith in others. In a world that can feel overwhelmingly self-centered, we all may have moments of cynicism.

Luckily, all it takes is an act of kindness to snap us out of it, and reminds us to extend to others what we wish for ourselves. Following Nolitha’s kindness, Brandon wanted to pay it forward, and contacted Backbuddy– a South African fundraising service. There, he began a page for Nolitha, raising funds to thank her. On the page, he wrote:

“This goes to show that there are great people out there and I would like to pay it forward by starting a donation for her! My goal is to get roughly a monthly salary for her, which is R6000 [~336 USD]. I have donated R1000 of my money, and I’m sure she would appreciate any small donations, she is truly a South African Hero, and I hope she becomes famous! Many thanks Nolitha you are a legend!”

When doing something kind for others, you never know the momentum it can start. Nolitha reminded Brandon, and all of us too, that one small act of kindness can start an unexpected ripple effect.