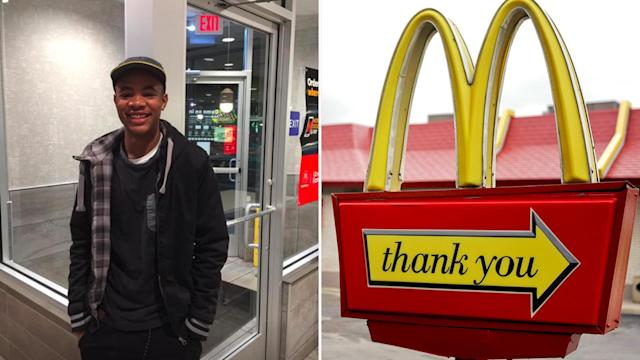 A young person helped a woman pay for her meal at McDonald’s, and touched the hearts of people worldwide in the process.
By Amanda Shaw    October 26, 2022

A young person helped a woman pay for her meal at McDonald’s, and touched the hearts of people worldwide in the process.

You never know when the people you encounter need your help, but are too embarrassed to say something about it.

Tired and hungry, Aundrea Duncan left her job at the barn on a Friday evening. She had skipped lunch and it was late, so she drove up to a McDonald’s in Reading, Ohio, to get a warm meal.

It was only when she reached the drive-thru window after ordering that she realized she had forgotten her wallet at work. Embarrassed, she asked the cashier to cancel her order.

The cashier, Jeremiah McDonald-Hemphill, then took out his wallet and used his own money to pay for Duncan’s meal.

Duncan was floored. “He didn’t know how tired I was or that I hadn’t eaten or even if he would be repaid, but he didn’t even bat an eye and just acted…if he hadn’t done that I probably would have just gone home and went to bed without eating.”

Instead, still reeling from that random act of kindness, Duncan thanked the boy and went home with a warm meal. But she couldn’t stop thinking about it and, later, she returned to the restaurant to pay Jeremiah back. His compassion had so touched her that she asked if she could give him a hug. She also asked his permission to praise him on Facebook.

In a public post, Duncan documented Jeremiah’s generosity along with a picture of the young cashier grinning from ear to ear. The post has since gone viral with 5,700 shares and 21,000 reactions.

And another: “Jeremiah you’re awesome. Thanks for being so nice without thinking twice.”

In all, there have been over 2,500 comments to date. Jeremiah’s random act of kindness has lifted people’s spirits, made them smile and given them hope in young people.

RELATED: Walmart Shopper Films a Cashier’s Reaction to a Crying Customer – The Secret Video Inspires a Community to Respond

“Wish there were more Jeremiah’s in this world!”

“You’re a fine young man. Many blessings are coming your way.”

“There are really awesome people in this world.”

“What a sweet young man. Must have some awesome parents.”

In fact, Jeremiah himself commented on the post and thanked his mom:

Duncan Brought a Sense of Pride to His Community

If you’re thinking his mom would be proud, you would be right.

Donna McDonald also weighed in on Facebook: “[I] thank each and every one of you for the kind words in regards to my son. To God be the glory.”

Duncan is glad that word got to Jeremiah’s mom about her son’s kindness to a stranger. “As a mom of two young men, I wanted her to know what he did for me and that she is doing something right. As moms we all need to hear that.”

Duncan told Jeremiah to keep on being who he is. “We hear so much about what’s wrong with the world, I had to share a little of what is right.”

Young people using their own resources to show kindness and compassion to strangers is definitely one of those things going right in our world today.