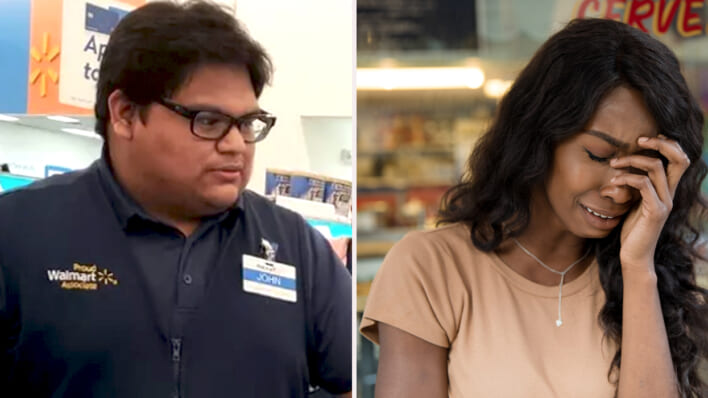 After a teenage Walmart employee selflessly steps up to help a woman in need, his Texas community pays him back.
By Heidi Hamm    October 16, 2022

After a teenage Walmart employee selflessly steps up to help a woman in need, his Texas community pays him back.

John Lopez Jr., 19, was working as a cashier at his local Walmart to save money to put himself through college. He had been at the job for nine months when, during one of his shifts, he decided to use some of his hard-earned college funds to help his fellow Man. Or in this case, woman.

RELATED: Boss Decides to Go Undercover to Work – Is Taken Aback by What He Sees an Employee Do on the Job

The woman had broken down in tears when she realized that she was short on the $110 that she owed him for her groceries. Without hesitation, Lopez Jr. knew exactly what he needed to do.

He told CBS affiliate, DFW, “She started crying and I was like, ‘OK, I got you – I got you. I just felt in my heart that the Lord told me I had to help her.”

So help her he did.

In a generous act of kindness, Lopez Jr. used part of his college savings to pay the struggling woman’s bill — all 110 dollars of it. The incredible exchange was captured by Laci Simms who was a few customers back in line.

She posted a photo of the good deed in a now-deleted Facebook post on her personal page with the following caption:

I just witnessed this ‘kid’ pay for a cart of merchandise for a woman in obvious distress about her inability to pay. She was a few people ahead of us and when she had trouble paying her bill he stepped in and told her if she’d wait he would pay her total. Ya’ll, it was $110 dollars.

Simms went on to explain that while she didn’t know his story, what she did know was that Lopez Jr. had just renewed her “faith in humanity and the generation that we are raising!” The kids? They’re alright.

The post quickly went viral, and for good reason. There were thousands of comments praising Lopez Jr. for his actions. When a stranger needed help, he didn’t hesitate to sacrifice his own needs for someone else’s.

And while this is inspiring in itself, the story doesn’t end there.

How a Texas Community Gave Back to an Inspiring Young Man

After hearing about Lopez Jr., Brandon Weddle couldn’t stop thinking about him. He knew he needed to do something. So, he created a GoFundMe fundraiser to help Lopez Jr. pay for college.

“I recently saw a post where this cashier at Walmart paid for a [sic] ladies groceries who was obviously in need. The bill was not a small one. No questions asked. He gave selflessly,” Weedle wrote on the page.

He continued, “It was made public. The comments that I’ve seen about this gentleman is extraordinary. He touches a lot of lives on a daily basis. I’d like to give back to him for constantly giving himself to our community.”

In addition to the GoFundMe, Weddle also organized an event to honor the local hero. Princeton mayor John-Mark Caldwell and police chief James Waters presented him with a certificate and a medallion.

What Prompted John Lopez Jr. to Help a Stranger in Need

It turns out that Lopez Jr. makes a habit of helping others.

“My parents basically taught me if someone needs help, you should be able to help them and if someone is down, bring them up,” Lopez told DFW. “I make it my goal to at least in one way make someone smile.” That’s a goal definitely worth having.

Lopez Jr. helped this woman when she needed it, but more than that, he showed her that compassion and kindness exist in a world that can so often feel cold and uncaring. In doing so, he not only made a difference in the stranger’s life, but he also inspired others to do the same.

Hidden Cameras Catch a Homeless Man Finding $2,000 in the Street – No One Could Predict What the Footage Reveals Next