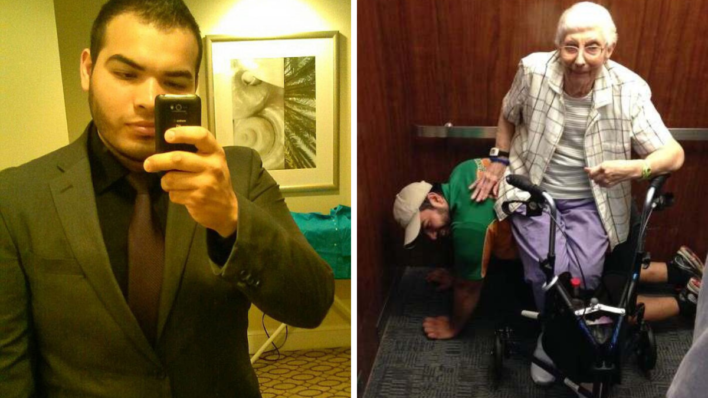 Who said chivalry was dead? A student went out of his way to do something kind for an elderly woman
By Joel Balsam    July 29, 2021

Who said chivalry was dead? A student went out of his way to do something kind for an elderly woman who appreciated his good deed.

A few men and a 79-year-old woman were riding an elevator in Florida, until it stopped suddenly — they were trapped inside.

So, the guys started making phone calls for help.

It looked like they’d have to wait a while, which proved to be a big problem for the lady. She said she’s unable to stand for long periods of time due to fatigue.

“We were riding with a very nice elderly women,” said, Cesar Larios, who was on the elevator, to Good News Network. “As soon as it got stuck the lady said she could not stand for extended periods.”

He made himself into a human chair

At this point, Larios had options. He could stress out with the woman. He could watch her uncomfortably sit on the ground. Or, he could think outside the box.

As you probably know by this point, he thought outside the box.

For 30 minutes straight, Larios served as a human chair for the woman so that she could rest her legs before they were rescued.

Making the world a better place

Larios’ employer, the hilariously named College Hunks Hauling Junk, wrote on Facebook that Larios’ good deed was part of the company’s desire “to make the world a better place.”

”I thought this was a great example of old-fashioned service and helping your fellow neighbor,” said Co-Founder & President of College Hunks, Nick Friedman. “The response to the picture is mind blowing. Thousands of people are sharing it and posting it on social media. I think what’s great about it is that it’s a genuine moment caught on camera. A lot of people say the younger generation has lost certain values. But one small picture shows that chivalry and hard work are still very much alive in our youth.”

It feels good to help others

It would have been easy for the student to ignore the old lady’s fatigue. It’s not like it was his grandmother.

But thankfully, he chose to do the right thing and help her instead, proving that a little bit of kindness for a stranger can go a long way.