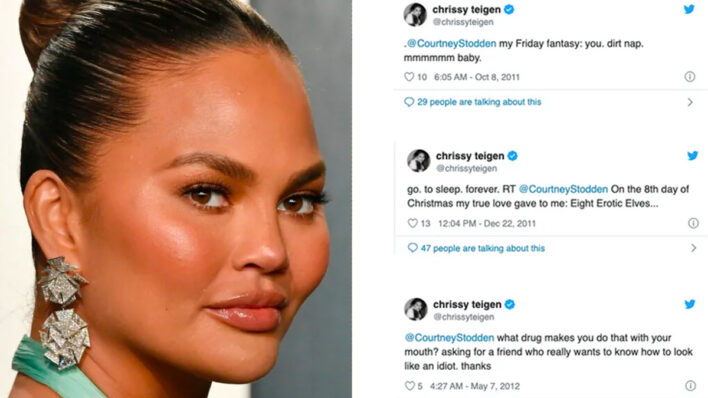 When we talk about Chrissy Teigen’s cyberbullying scandal, we should really be reflecting on our behaviors too.
By Arielle London    June 21, 2021

When we talk about Chrissy Teigen’s cyberbullying scandal, we should really be reflecting on our behaviors too.

They say that “the apology should be as loud as the disrespect was,” and I’m inclined to believe that to be true. A majority of us will apologize when we either feel terribly bad about our behavior, or when it is deemed necessary to do so. When not saying “I’m sorry” threatens our luxuries, comforts, relationships and lifestyles, the words can tend to magically come out as if on cue.

The thing about an apology though, is it shouldn’t be convenient. When you have wronged someone, you should apologize before being called out. But in cases where you have already been called out and then genuinely recognize the error of your ways, apologizing, even if it sounds too timely is still the right thing to do. Either way you’re going to receive criticism, so you might as well use the attention to try and do right by the people you wronged. The healing has to start somewhere.

Chrissy Teigen’s apology for her former cyberbullying ways is the talk of the Internet right now. At the moment the discourse is focused on the sincerity of Chrissy’s apology and what she did, as opposed to perhaps the mirror her former actions holds up to many of our owns pasts or even current behaviors.

Cyberbullying, Chrissy’s sin, is dangerous because there is a certain level of boldness that accompanies being an online bully, also known as a troll, given the fact that they are hidden behind a screen. As Teigen says in her apology posted on Medium, “I was a troll, full stop. And I am so sorry.”

An admission of guilt under any circumstances is uncomfortable for the person doing the admitting. For Chrissy, she had to own up to the fact that she trolled certain people to the extent that it negatively affected their mental health. She did so publicly through tweets and privately through direct messages.

Project Runway contestant Michael Costello posted an alarming statement on his Instagram account after Chrissy posted her lengthy apology. Costello says, “I wanted to kill myself and I still am traumatized, depressed, and have thoughts of suicide.” Chrissy Teigen falsely accused Costello of being racist in 2014. Despite the Project Runway contestant’s pleading with Chrissy to talk about the false narrative she was perpetuating online, Teigen refused to hear him out.

In the posted screen shots of the direct messages between the two, Chrissy says to Costello, “Racist people like you deserve to suffer and die. You might as well be dead. Your career is over, just watch.” And, that’s exactly what Costello says he did. He watched as his career crumbled around him as he would surreptitiously get pulled from projects at the last minute and lose out on opportunities.

By the sounds of Chrissy Teigen’s target’s post, her cyberbullying took its toll (although Chrissy’s team has since released a statement refuting Costello’s claims).

But just as with any form of violence, emotional or otherwise, “hurt people tend to hurt people.” Chrissy Teigen’s behavior did not come out of nowhere. There was a source.

In her lengthy apology, Chrissy says, “There is simply no excuse for my past horrible tweets. My targets didn’t deserve them. No one does. Many of them needed empathy, kindness, understanding and support, not my meanness masquerading as a kind of casual, edgy humor.”

Teigen reflects on that time period in her apology and says, “In reality, I was insecure, immature and in a world where I thought I needed to impress strangers to be accepted.” On this point, I believe that many of us can relate.

Chrissy writes, “Words have consequences and there are real people behind the Twitter handles I went after. I wasn’t just attacking some random avatar, but hurting young women — some who were still girls — who had feelings. How could I not stop and think of that?”

Teigen continues saying, “Why did I think there was some invisible psycho-celebrity formula that prevents anyone with more followers from experiencing pain? How did I not realize my words were cruel? What gave me the right to say these things?”

There is a contradiction in cancel culture that has always confused me, and it can be summed up in one word: growth. We all experience growth. When someone does something, no matter how awful or regrettable, there is always a chance that they can learn from that experience and grow. There is also a chance that they can remain a bully their entire lives, but the potential for growth and almost guaranteed inevitability of change is still there.

Chrissy says that is exactly what happened with her. Chrissy writes on Medium, “The truth is, I’m no longer the person who wrote those horrible things. I grew up, got therapy, got married, had kids, got more therapy, experienced loss and pain, got more therapy and experienced more life. AND GOT MORE THERAPY.”

Demonstrating that growth and noting the karmic nature of the backlash that she is experiencing online right now, Teigen says, “Life has made me more empathetic. I’m more understanding of what motivates trolling — the instant gratification that you get from lashing out and clapping back, throwing rocks at someone you think is invincible because they’re famous. Also, I know now how it feels to be on the receiving end of incredible vitriol. Believe me, the irony of this is not lost on me.”

Then Chrissy’s statement spoke to me on a deeper level. Teigen says, “I’ve apologized publicly to one person, but there are others — and more than just a few — who I need to say I’m sorry to. I’m in the process of privately reaching out to the people I insulted. It’s like my own version of that show My Name is Earl! I understand that they may not want to speak to me. I don’t think I’d like to speak to me.”

Chrissy’s behavior is more common than you think

There were some years in my life that were very rocky to say the least. This was due to mental health problems largely triggered by some major traumas. These problems led me to be hospitalized for mental health issues. In the process of being put in a psych ward, which is a highly frightening experience, I tweeted every single person under the sun that I thought could help me. And who do you think can help you in those types of situations? People with power. So, I messaged celebrities, public figures, acquaintances, friends, family members, and the list goes on. I contacted a lot of these people publicly and some privately. The nature of the exchanges did not reflect my best self. The nature of the exchanges in fact reflected a person I do not even know, because in that moment in time, due to the extent of my mental health issues, I was not 100% in control of my person.

Cyberbullying has real life implications. In her TED Talk, Monica Lewinsky says of the cyberbullying she experienced surrounding the Clinton scandal, “both of my parents feared I would be humiliated to death, literally.”

Since her experiences of being cyberbullied to the extreme, Lewinsky has become an advocate to raise awareness around cyberbullying and its very serious consequences. On the TED stage Monica says of young victims, “Every day online, people—especially young people, who are not developmentally equipped to handle this—are so abused and humiliated that they can’t imagine living to the next day. And some, tragically don’t.”

This is the reality of cyberbullying. The real consequences of sending out those messages you think will not affect the person on the receiving end. You are communicating with that person and if they see your message, you are creating a mental response within them.

I have often wanted to apologize to a whole number of people. I have considered writing a public article in the way that Chrissy did, or sending an email where appropriate, but my choice was to give these people peace. I am not a clout chaser, and so I do not want to write a public apology to all of these people and lump them into a category or association they do not want to have.

In Chrissy Teigen’s words, “We are all more than our worst moments.”

I think I need to tell myself that a little bit more when I reflect on that time of my life. I have grown. I have healed. I am still healing. And if you are reading this article and have been on either side of the “trolling coin,” just know that you can decide to flip it at any moment.

Unkind words said in public or private are troll like behavior. Most of us are guilty of having said regrettable things at certain points in our lives.

Bullying is another level of aggression and should be regarded in a serious manner. But check yourself before you wreck yourself. We can all throw stones but we’re often standing in glass houses. Some stones are heavier than others and do greater damage. And when we inflict damage upon others, which in this lifetime is inevitable as human beings, we should own our behavior. An apology is an act of healing for the person whom we hurt and an act of progression for our own personal growth.

Sometimes we just need to hear “I’m sorry,” because even if an apology cannot erase the pain, it can help us resolve it. The potential for growth is within every one of us.