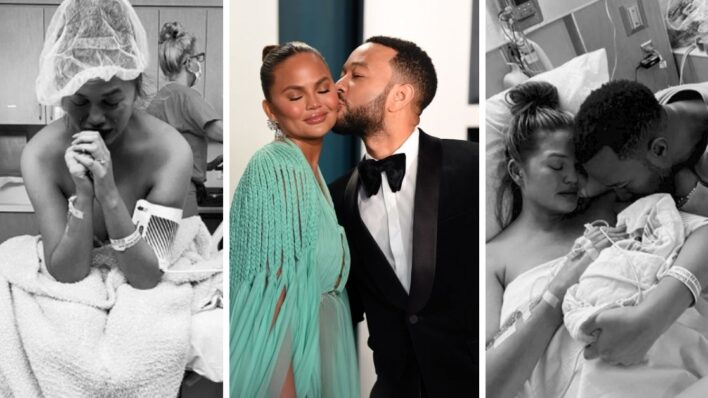 Chrissy Teigen decided to publicly announce her miscarriage, exposing herself at her most vulnerable state. In doing so, she also helps in changing the we we think and talk about pregnancy loss.
By Shaoni Das    October 2, 2020

Chrissy Teigen decided to publicly announce her miscarriage, exposing herself at her most vulnerable state. In doing so, she also helps in changing the we we think and talk about pregnancy loss.

Chrissy Teigen and John Legend are reeling from a devastating loss. On Wednesday, September 30, Chrissy announced that she had suffered a pregnancy loss. This would have been the third child for the couple.

Since her announcement, there’s been an outpouring of both sympathy and criticism directed at the couple. As is the case with most celebrities, nothing is rarely non-controversial. The situation becomes even more intense when you consider that Chrissy herself is a very controversial celebrity.

She is often dubbed as the “Queen Of Twitter,” and never holds back from sharing her thoughts or feelings. In many ways, she’s the modern celebrity: witty, honest yet oftentimes contentious. But Wednesday’s announcement was as tragic as it can be, leaving Chrissy and John in an immensely vulnerable position. They couldn’t and shouldn’t concern themselves with haters when it’s a matter of life and death.

As horrifying as it may be, there are a couple of things we should all note about the incident. Our pains might not be the same but grief is a universal feeling nonetheless.

The couple had announced on August 13 that they were expecting their third child. Yet the pregnancy was rife with complications from the get-go. On Saturday, September 26, Chrissy told her followers that she was in the hospital following a month of heavy bleeding.

They’d found a blood clot earlier in the morning and had to make a frantic trip to the hospital. In the hospital, she was given two blood transfusions. At the time, they could just about hear the heartbeat of the baby and let out a “relief sigh.”

Yet the feeling of relief wasn’t to last. In announcing the loss, Chrissy said, “We are shocked and in the kind of deep pain you only hear about.”

Apparently, they were never able to stop the bleeding and give the baby the fluids that he needed to survive. The countless blood transfusions didn’t work, either. Chrissy also shared that she and John only settled on their other kids’ names once they had been born and the family had left the hospital. But for some reason, they had decided “Jack” for the little one.

Unfortunately, Jack wasn’t able to come into this world but Chrissy maintains that he’ll always be a part of their family. She added:

We are so grateful for the lives we have, for our wonderful babies Luna and Miles, for all the amazing things we’ve been able to experience. But everyday can’t be full of sunshine. On this darkest of days, we will grieve, we will cry our eyes out. But we will hug and love each other harder and get through it.

The Twitter personality also shared a black-and-white of her grieving in the hospital right after the loss.

Chrissy’s “oversharing” can help so many others through their trauma

Many dismissed and condemned Chrissy for not only discussing her pregnancy loss but daring to post a photo of herself just after it occurred. They chalked it up to the same, old “oversharing” aspect of her social media presence. Both anonymous and well-known users have jumped on this bandwagon without sparing a thought for Chrissy and John and how they’re processing their grief.

It’s not for us to say whether Chrissy’s activities on social media verge on the level of “annoying” or “unnecessary.” What we can say fairly confidently is that issues of stillbirth, miscarriage, pregnancy loss and various other complications in this department are often swept under the rug.

Women tend to feel “broken” when they go through such traumatic experiences. For most, life has to go on and they have to get on with their day-to-day responsibilities. In a study published by Obstetrics & Gynecology, it was reported that nearly half of the people who’ve suffered miscarriages or whose partners have suffered have miscarries feel some sort of guilty. A woman named Amy Webb shared her story in The Atlantic about having multiple miscarriages. She said:

Miscarriage is a frequent and normal part of the human experience, but we rarely talk about it, so a woman going through one often feels like she, or she and her partner, are alone.

People forget that pregnancy loss is absolutely a form of grief. And most know that grief is something that differs from people to people.

Chrissy decided to be outward with her grief, which is as valid as keeping it to yourself and moving on. Chrissy’s personality is centered around being outgoing and being frank about her experiences — why would she omit the bad experiences and only highlight the positive ones? She’s previously talked about going through IVF treatments and suffering from postpartum depression.

Sometimes the decision to share makes us feel more empowered, sometimes it makes everything hurt a lot more. But a major celebrity being this forthcoming about a pregnancy loss would undoubtedly make another woman going through the same thing feel less alone.

A subject like this shouldn’t be taboo, so when an influencer takes it upon herself to tell the whole world that she feels terrible pain at losing her child in her womb, it matters. Some women will feel less alone, some women will feel more represented, some women will relate to the struggle and some will find a new way to understand their grief. Chrissy’s “oversharing” in this case shows strength by way of vulnerability — a remarkable feat if there was one.

Don’t let anyone shame you for your grief

Pregnancy loss, stillbirth, infant mortality, birth complications — these are incredibly commonplace. Yet they’re not discussed when people refer to grief. If Chrissy’s experience can force an international conversation about miscarriage and early pregnancy loss, then so be it. Not everyone will go through a miscarriage but everyone’s a little familiar with some form of grief.

Whether it’s a grandparent or a childhood pet, you’ve lost someone and you might feel empty. You might feel a range of emotions you don’t know how to express or understand — you need to tell yourself that no form of grief is lesser than the others. You need to let your emotions fly however you need to. Whatever gets you through the moment with your sanity intact is valid.

Chrissy chose to shed light on her own circumstances without sugarcoating it. If that helped her feel just the tiniest amount of hope that things were going to be okay, then she had every right to do. Therefore, you as well need to tell yourself that you don’t have anyone taunt you for how you decide to take in an emotional moment. Letting your feelings run how they want to run is the biggest gift you could give yourself when situations get tough.