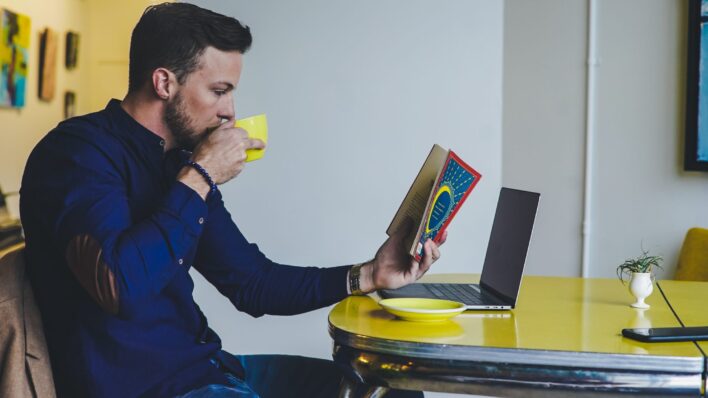 Today, he’s the owner of a multi-million dollar coaching business and the author of four books, including his latest release Abundance Unleashed: Open Yourself To More Money, Love, Health, And Happiness Now.

But life hasn’t always been rosy for Mickelsen. In fact, he grew up in poverty and was bullied for years.

“I felt ashamed for being poor,” said Mickelsen.

All through elementary school, middle school and high school, kids picked on him for wearing hand-me-downs and he felt hopeless. He spent a lot of time just wanting to disappear.

“I linked up in my mind that being poor meant people don’t like you,” he said.

The teasing continued after college when he entered the workforce. Pretty soon, Mickelsen found himself working a job he hated, his relationship was on the rocks and he was slowly giving up on his own dreams.

“I felt like a stranger in my own life, I felt alone and lonely laying right next to this woman that I loved,” he said.

He felt lost and unmotivated when a friend introduced him to a personal coach that helped steer him into the right direction.

“I started working out regularly, I started taking action to grow my business,” remembers Mickelsen.

As his business started to gain traction, he quit his job to focus on it full-time. While his business was doing well, he had his fair share of financial struggles.

“In the first two years, I struggled to pay my mortgage, I was constantly worrying about whether I could pay my bills.”

Feeling overwhelmed with the responsibilities of running a business, Mickelsen almost gave up when a friend challenged him to read one book per week. He agreed to it and read a new book every week, for 36 weeks in a row. The experience taught him that passion is the true driving force behind any successful business. He quickly realized that he simply didn’t have the kind of energy required to keep his business running.

RELATED: These Are the 20 Most-Read Books of 2018, and They’re Surprisingly Uplifting

That’s when he decided to risk everything and take the leap into what he excited him the most: helping others.

“I started marketing myself as a coach and just started focusing on doing what I love–helping people,” said Mickelsen.

After shifting his mindset, his personal coaching business started to grow and he began attracting more and more clients.

When he was approached by other coaches for his expertise, Mickelsen came to realize that after all of the trial and error, the greatest reward was being able to share his knowledge with other coaches.

Through his journey, he’s learned that once you decide to show up, put in the work and confront the things that are holding you back, success is inevitable.

For Mickelsen, that meant switching from the poverty mindset he was stuck in for most of his life to one of abundance.

“When you let go of the fear of not having enough, then you realize there’s always been enough and there always will be enough,” he said.