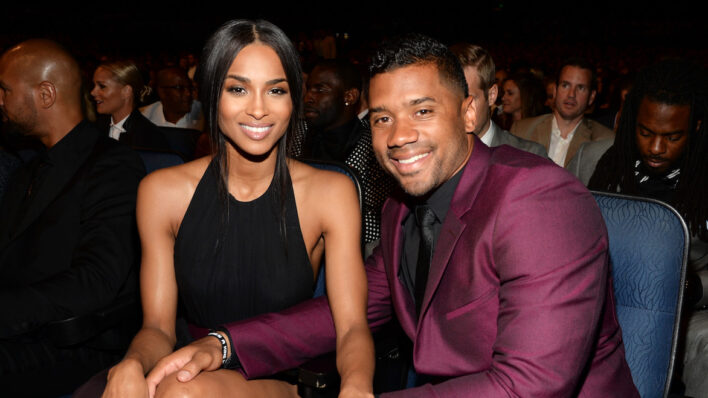 Ciara and Russell Wilson prove that a past toxic relationship does not prevent you from moving on to a healthy and strong romance. While Ciara went through a rough patch with her ex Future, she was able to find her soulmate in Russell Wilson.
By Barbara Pavone    March 27, 2020

Ciara and Russell Wilson prove that a past toxic relationship does not prevent you from moving on to a healthy and strong romance. While Ciara went through a rough patch with her ex Future, she was able to find her soulmate in Russell Wilson.

Ciara and fiancé Future appeared to have a perfect relationship (they were smitten with each other and welcomed their son, Future Zahir Wilburn, in May 2014), but things suddenly went awry when rumors surfaced that the rapper had been unfaithful during their engagement. As one source told E! News, Ciara was “very embarrassed […] humiliated and angry” and the relationship soon turned toxic.

Although the pair initially tried to work things out, they officially split in December 2014. As if that ordeal wasn’t painful enough, Ciara was also forced to fend off nasty allegations made by her ex in public. In February 2016, she actually filed a $15 million defamation lawsuit against Future for criticizing her parenting and claiming that she was using their son as a publicity stunt.

But no matter how nasty things got, Ciara refused to give up on finding her soulmate — and it paid off. In 2015, she found solace and support in her budding romance with Seattle Seahawks quarterback Russell Wilson who showed her what real love is all about.

Here’s what we can learn from Ciara and Russell Wilson’s relationship:

Although Ciara and Russell Wilson have never confirmed how they met, US Weekly reported in April 2015 that the couple had been “hanging out” for a few weeks and that they were first spotted together at the April 10 wrap party for NBC’s I Can Do That. According to one insider, “They were cozy in a booth together at the party.”

Less than two weeks later, the pair attended a Seattle Mariners game together and, later that month, a press release for the White House Correspondents’ Dinner listed Ciara as Wilson’s “date.” Although the sportsman later denied the news, saying his grandmother was his plus one, all of the speculation had indeed been true: Ciara and Wilson were dating.

As Ciara navigated the drama that plagued her split from Future, Wilson was right by her side. He embraced all aspects of her life — both good and bad — and, in March 2016, he popped the question. Just four months later, they said “I do” in July 2016 at Peckforton Castle in England.

His admiration goes way, way back

Before Wilson and Ciara ever met, the football great was already smitten with her. In a July 2015 interview with The Rock Church, he called her a “sweetheart” and gushed, “She’s everything you could ever want, honestly.” He then revealed that his admiration for the “1, 2 Step” singer runs way, way back.

I told somebody that that’s the girl I want to be with before I even met her. Before I met her, I was like, ‘I’m probably going to end up with Ciara.’

As for Ciara, she may not have known ahead of time, but it sure didn’t take her long to realize just how special their bond was. “I had never had that feeling in my life,” she revealed during an episode of Red Table Talk. “It was just, like, calm. We were connecting in every way. His conversation, it was just different.”

She also revealed that his relationship with her son was also a convincing point.

The way that he looked at life was different. Also, the energy with my son, it just felt right. And of course, the consistency. He’s consistent. That consistency is so crucial.

She didn’t let her past taint her future

Rather than allowing a toxic relationship and messy split to taint her outlook on love, Ciara chose to be brutally honest with herself and work through all of her feelings.

When you allow yourself to be vulnerable, you become your strongest.

Ciara to The View

So that’s what she did.

Opening up about that emotional time in her life, she admitted, “I’d have moments when I would be in the shower, I’d be crying. Crying because I’m not in the happiest place and it hurts what I’m going through.”

But the pain was nothing compared to the thought of forcing a relationship that just wasn’t meant to be.

It would be the worst scenario to stay in a situation that’s just not healthy, that’s not gonna get any better. Knowing what you don’t want is really important. That’s more than half [the battle].

She learned from her heartbreak

“I’ve always had the same goal of wanting to be loved in a certain way, but I was just walking in the wrong direction,” she noted and so, she started walking in the right direction. Refusing to settle for anything less than pure happiness, she reopened her heart to the possibility of new, positive love.

Enter Russell Wilson. He brightened up her world and proved to be the complete opposite of her ex. As she told Access Hollywood, “My husband’s pretty awesome and you know it’s been an incredible journey.”

In 2019, Future proved just how different he and Wilson were when he slammed the quarterback for being too level-headed about Ciara’s past. “He do exactly what she tell him to do. He not being a man in that position,” he criticized. “If that was me,” he continued, “she couldn’t even bring her exes’ names up.”

They respect each other’s beliefs

Opening up to Cosmopolitan about their decision to abstain from sex, Ciara admitted it was tough — “I’m human, so it is not easy, especially when I look at him and I think he is the most beautiful thing I’ve ever seen” — but important.

“The cool thing is that every day, we’re growing with each other,” she told the mag. “We get to have really healthy conversations and focus on each other as people. That is very important to me and him. It’s very valuable.”

This respect for her faith is something Ciara didn’t seem to experience with her ex. When Future was asked about the singer’s vow of celibacy, he jeered, “God told me something else. He ain’t tell me to wait. I guarantee you that.”

Wilson embraced the most important thing in Ciara’s life

Ciara was a single mom when she met Wilson and he immediately realized that he needed to embrace the most important thing in her life: her son.

In fact, Wilson’s mom, Tammy, gave him some important advice about being a stepdad.

“I said to him, ‘OK, if you’re really serious about it then you have to love that kid as if it were your own, even if that means that you give that kid your name,” she recalled. “If you’re going to be with someone who has a kid you can’t treat that kid any differently than if it were yours.”

Ciara sure approved. As she told E! News, “He’s been such an incredible father since day one. He’s so loving and very patient.” So, in April 2017, the couple grew their family, welcoming their first child together, daughter Sienna Princess. Jump to January 2020 and they announced that they were expecting “number 3”.

And while Wilson was embracing his new role as a father, Future was on the sidelines, once again tearing down his ex and her newfound happiness. “Of course I wouldn’t want someone pushing my son [in a stroller],” he slammed. “You never do that in our community. You don’t even bring a man around your son. You know this dude for a few months and you’re bringing him around your kid? Who does that? Nobody does that.”

They continue to work on their marriage

Despite their picture-perfect marriage, Ciara and Russell Wilson continue to actively work on their connection. Their relationship is one built on love, support, and, most importantly, communication.

Russ and I always like to have the conversations and reflect on our years in general, whether it’s what we’ve done individually, but also together and how we can keep on leveling up our love.

It’s easy to support each other when everything is going smoothly — it’s how you handle the obstacles that speaks volumes about your bond.

In the case of Ciara and Wilson, they’ve never wavered in the face of difficulty. Whether it was fending off Future’s negativity or figuring out how to blend their families, the couple has always confronted challenges as a team because that is what true love is all about.