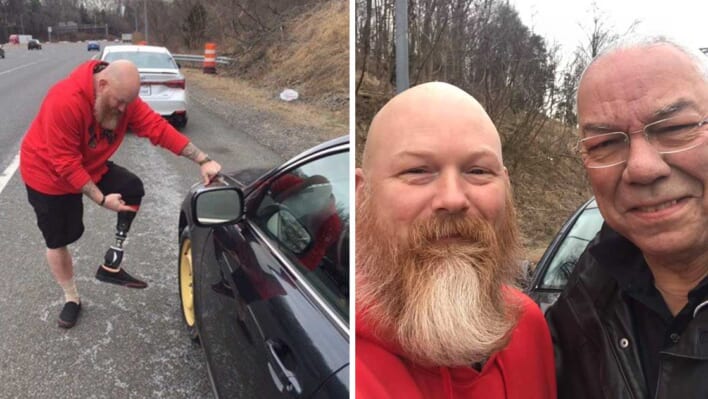 A good samaritan meets his hero

Anthony Maggert was driving along Interstate 495 when he saw a sharply dressed man struggling to change the front tire of his car. He was surprised to recognize the man. It was none other than Colin Powell, the former Secretary of State.

Maggert immediately pulled over. He would have helped anyone in the same situation, but there was a reason he felt especially blessed to be able to help Powell. And with the freezing temperatures, Powell could certainly use the help. The two men worked together to change the tire and then hastily parted ways, both of them on their way to a meeting.

But just before they said goodbye, Maggert pulled out his phone and took a selfie with the retired army officer. He had served in Afghanistan, and Powell was a hero in his eyes.

RELATED: Waitress Hands Soldiers a Note After Paying For Their Meal – What Happens Next Changes Her Life

“As I drove along Interstate 495 my left front tire blew out. I am a car guy and knew I could change it but it was cold outside and the lug bolts were very tight. I jacked the car up and got several of the bolts removed when a car suddenly pulled up in front of me. As the man got out of his car I could see that he had an artificial leg. He said he recognized me and wanted to help me. We chatted and I learned that he lost his leg in Afghanistan when he worked over there as a civilian employee.”

Strangers Get Back In Touch

Powell didn’t have to wait long before Maggert reached out to him. He sent Powell the picture with a message that read: “Gen. Powell, I hope I never forget today because I’ll never forget reading your books. You were always an inspiration, a leader, and statesman. After 33 years in the military you were the giant whose shoulders we stood upon to carry the torch to light the way and now it is tomorrow’s generation that must do the same.”

Renewed Faith in Others

The stranger’s willingness to help him touched Powell; but Maggert didn’t feel like they were strangers. He had read Powell’s books and had been deeply inspired by them. For much of Maggert’s career, it was Powell’s words of wisdom that had followed him. When he saw Powell in person and had a chance to reach out to him personally, it was an opportunity he wasn’t going to miss! Little did he know that the his hero, the decorated war veteran, would pass away just two years later.

At the time, Powell kept the conversation going, responding to Maggert’s photo and message with: “Thanks, Anthony. You touched my soul and reminded me about what this country is all about and why it is so great. Let’s stop screaming at each other. Let’s just take care of each other. You made my day.”

Take Care of Each Other

Indeed, the lesson to be learned here is to take care of each other, to help anyone in need in any way that we can. Both of these men were able to make each other’s lives a little brighter, in ways big and small.

RELATED: Mom Stranded on the Highway Without Cell Service Begins to Panic – Then, a Man Pulls Over