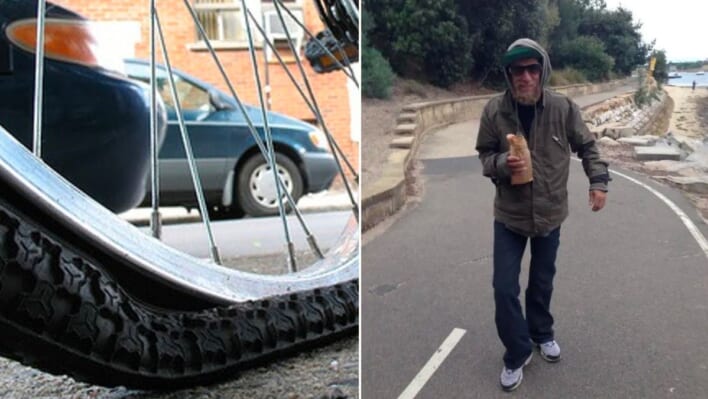 Tony Biggs learned a lesson in humanity after a homeless man came to his rescue.
By Sophie Tolias    November 8, 2022

Tony Biggs learned a lesson in humanity after a homeless man came to his rescue.

Tony Biggs was riding his bicycle on a path near his home in Sydney, Australia, when he got a flat tire, about five kilometers in.

He was pushing his bike home, when a homeless man walked out from under a bridge and offered to give him a spare bike tire tube.

An Unexpected Hero Steps In

“This is Jesse, he is a drifter who lives near the bridge in my area,” Tony shared in a post online. “He owns nothin but a bike, a bird and a bag of about 10 items! Yesterday, while I was riding my bike down around the beach, which is about 5km from my house, I got a flat tyre. I had no choice but to turn around and wheel my bike the long walk home.”

He went on to describe their conversation.

RELATED: An Anonymous Man Is Feeding the Homeless at Night Dressed as Spider-Man

“A few people rode past and didn’t really pay me any attention and I didn’t expect them too, but as I started walking, headphones in my ears, I noticed the homeless guy from under the bridge saying something to me. At first I thought he was going to ask me for something, so I popped my headphones out and asked him what he wanted? He then replied ‘I don’t want anything bra but I’ve got a new tube in my bag and you can have it if ya want!’ Shocked at first I said no thanks, but he insisted. So I walked over to his little clearing where he had his things, and his pet bird [which] sat in a busted cage.”

Even though Jesse didn’t have much, he offered the bike tube to Tony for free and even used a small bike pump he had to fill Tony’s new tire. Tony said the following on Facebook: “He opened up his empty bag and gave me the tube (which was one of the very few things he had), helped me change the tyre, even pumped it up! I asked him how I could pay him back and he said to me ‘don’t worry about it bra, this is what it’s all about!’”

An Act of Kindness Leads to a Changed Perspective

Tony was humbled and moved by Jesse’s kindness: “The enormity of his situation and the fact that he went out of his way to help me was so humbling, I mean this guy was willing to give me his stuff and didn’t want anything in return. To you and I, a bike tube would probably not mean much, but to a guy with so little, this item must hold enormous value!”

“I could go on and on about how selfless this guy was to give me, a total stranger clearly in a much better position than him, some of his possessions, while people like us are so selfishly attached to all our useless [stuff],” Tony wrote.

To thank him, Tony later brought Jesse a new pair of sunglasses, new shoes, a few weeks’ worth of food and birdseed.

Tony wraps up the post by expressing a very valuable lesson he learned from the experienc: “Man he was ecstatic, even had tears in his eyes and couldn’t thank me enough, but amidst me sitting there proud of my good deed, and him singing me praises, I suddenly felt pretty bad because the truth is if he didn’t go out of his way to help me, I wouldn’t of done anything for him. I ride past this guy all the time and never even think twice! Really knocked me off my high horse! Even tho we sit around with all our materialistic needs and pass judgment, this dude has something that none of us can buy! I guess what I’m trying to say is; thanks for the lesson in humanity champ!”

A wonderful lesson in humanity indeed — for all of us.