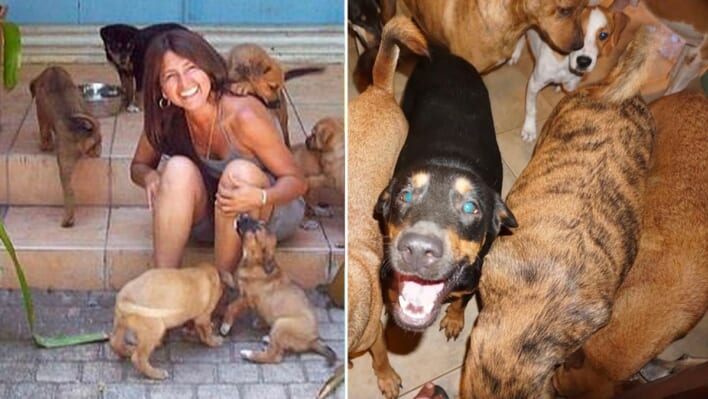 “They all want nothing more than to love and be loved, to feel safe and secure, with their basic needs met.”
By Amanda Shaw    October 31, 2022

“They all want nothing more than to love and be loved, to feel safe and secure, with their basic needs met.”

Chella Phillips had been working at a dog shelter for years before the hurricane hit. So when the shelter building had to close, she didn’t bat an eye at taking 97 homeless and abandoned dogs into her own home. After all, she was continuing her labor of love at a time it was needed the most.

Hurricane Dorion was a Category 5 hurricane that caused extreme winds of up to 220 miles per hour and flooding after more than three feet of rain fell on the Bahamas. It’s the second-strongest hurricane ever experienced in the Atlantic Ocean.

Converting Her Home Into a Dog Sanctuary

In her home in Nassau, Phillips did what she could to turn her living room, kitchen, and even her own bedroom into a safe place for the dogs that were running terrified through the streets. In all, she brought 97 dogs out of the storm and into her home.

Still, Phillips regrets not being able to bring in more. In a post, she wrote, “each of my babies deserve to have loving homes, so please, I am begging for rescues to help them! My heart is breaking that I left so many on the streets cause I had no more room to bring them [in].”

Phillips barricaded her doors and windows to keep out the wind and rain. She played music and even sang to the dogs to help keep them calm. She petted and played with them to distract them and ran the air conditioner full blast to keep them comfortable.

At one point, Phillips’ house lost power. Water started seeping in through the windows. But she never gave up. Armed with buckets, Phillips worked tirelessly to keep everyone dry. When she had a spare minute, she snapped photos of the dogs in her home and posted them to social media.

The World Was Touched by Her Generosity

Those posts went viral. When people learned of Phillips’ generosity and dedication to keeping those dogs safe, donations poured in. Immediate aid come in the form of crates.

“Everyone here gets along,” Phillips said, “and welcomes the newcomers with tail wags.” Some dogs, though, were anxious or injured. The crates helped immensely for these special cases. Phillips posted a thank-you on Facebook: “I managed to bring some less fortunate ones and I really appreciate some of you for donating crates. I really needed it for the scared ones and the sick ones, so thank you!”

For years, Phillips had been saving homeless dogs on the islands. She worked day in and day out to give dogs food, shelter and vaccinations at her shelter, The Voiceless Dogs of Nassau, and to find permanent homes for them both in the Bahamas and in the United States. It was most often a low-profile job…until the photos of those 97 dogs in Phillips’ own home hit the internet.

It can be said that the dogs were grateful. “It has been insane since last night,” Phillips wrote, “…but at least they are respecting my bed and nobody has dared to jump in.”

Every Dog Deserves a Home

Phillips was relieved by the monetary donations, which amounted to over $100,000—but her biggest hope remains the same as it was when she first opened her shelter: to find forever homes for each and every dog.

“They all want nothing more than to love and be loved, to feel safe and secure, with their basic needs met.” Phillips felt her work was validated when adoption applications started to come in.

All volunteers are heroes, giving of their time and resources selflessly to help others. But there’s something especially touching about people who advocate for helpless creatures, like these dogs, who have no voice.