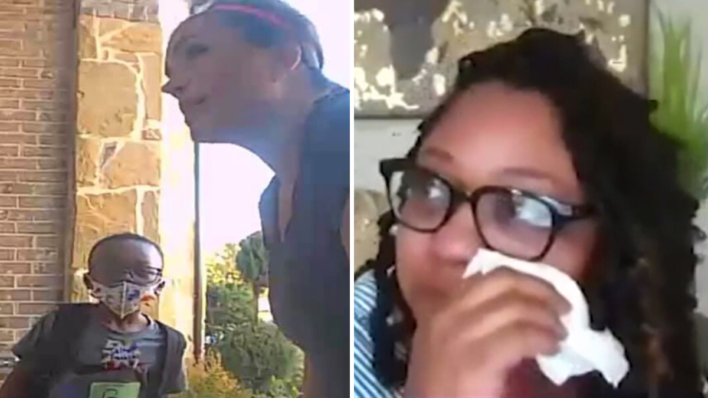 One neighbourhood mom and her children return a little boy to his home after he got off at the wrong bus stop.
By Sophie Tolias    February 25, 2022

One neighbourhood mom and her children return a little boy to his home after he got off at the wrong bus stop.

After months of remote learning, Colton Franklin was excited to see his friends at school again.

On his first day back, the 6-year-old rode the bus to school in Cypress, Texas. Everything was going well until he accidentally got off at the wrong stop on his way home.

When Colton didn’t get off at the right bus stop, his big brother Gavin, who was waiting for him, called their mother, Arlene Lightfoot-Franklin. She then called the school, which referred her to the transportation company.

“Where is he? The school doesn’t know. The transportation doesn’t know,” Arlene told KHOU 11. “So we were just riding around, looking for him. I didn’t know where I was going. I just knew I would take the route to the school.”

Meanwhile, Colton had no idea where he was and how to get home. A neighbourhood mom named Kim was driving by with her children when she spotted him running down the street.

I got out of my car and asked him what happened. He was so very brave and told me he was dropped off at the wrong stop and he didn’t know where he was.

“I thought it had to be right around there. I noticed he had a green sticker on his shirt. It didn’t have a phone number but it had his address. I put the address in my phone so I could find how to get to this house, come to find out, it was .5 miles away from where we were,” Kim wrote on Facebook.

Kim and her kids convinced Colton to accept a ride home. His hero walked him to his front door and rang their Ring doorbell, which triggered a notification on Arlene’s phone. The mom quickly turned her car around and was so relieved to see Colton safe.

Arlene shared the story on Facebook and Nextdoor hoping that neighbours would help her locate the good samaritan.

It didn’t take long for social media to bring the two parents together. That same week, her daughter’s kindergarten teacher showed Kim a picture and asked if it was her. It was, and the teacher directed her to Arlene’s post on the Nextdoor app.

“There’s nothing that we can do to repay her,” Arlene told KHOU 11. “Like, she didn’t have to stop. She could’ve gone on about her day. But she took the time to notice a little boy in trouble. Especially in this climate that we’re going through. Coronavirus. Everything. She took the time and risked her family being exposed to a stranger. She gave me a hug, knowing I’m a stranger.”

That just shows that there are people still out there and compassionate that care about one another. We just want to thank her. I don’t know what we can do, but I just want to formally thank her.

The power of community

The bus company later apologized for the mistake, and Colton had a successful journey to school and back the next day, and the two families remain friends.

We are now friends on Facebook and I hope to continue to watch Colton grow up and be the best person he can be!!! Dream big, Colton, and change the world. I will be a cheerleader for you!!!

This story is a perfect example of a community coming together to take care of each other. It really does take a village.

Never underestimate the power of community
“Alone we can do so little; together we can do so much.” – Helen Keller