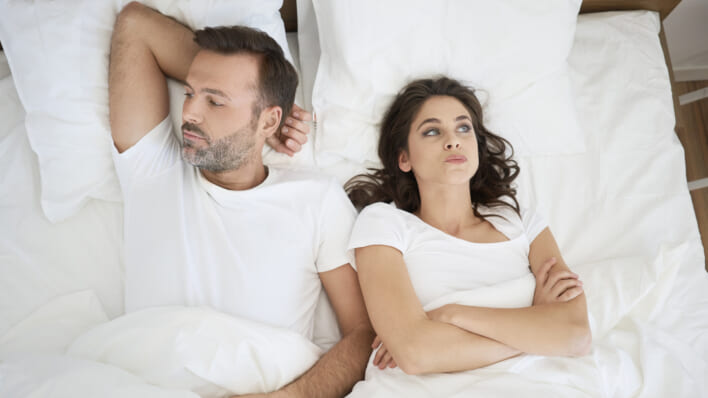 How to communicate better during sex, and why it’s so important.
By Steven John    September 5, 2022

How to communicate better during sex, and why it’s so important.

You know how communication is the bedrock of any good and lasting relationship, correct? With communication and trust, you and your partner can make it through just about any challenge. But while trust is built up stronger and stronger and can, in a solid union, eventually be taken for granted, communication takes continuing effort all throughout the many years of a relationship.

RELATED: These First Date Tips Will Pretty Much Guarantee a Second Date

Even after years or even decades together, you can never truly know what your partner is thinking, feeling, wanting, or needing. That’s why communication always remains key. And when it comes to, shall we say, body language, the same is true. In this case the body language in reference is, of course sex. If your sex is proving less fulfilling than you want, then start talking more and it will get better. Because when your partner doesn’t have to try to read your mind (or your body language) and you theirs and you instead just talk it out, you will begin to be physically in sync in delightful new ways.

How to Know When It’s Time to Talk

If you and/or your partner are frequently left unfulfilled by your coupling, then it’s probably time to talk about it – or even if you are occasionally unsatisfied, frankly; this is sex, after all, it’s supposed to be great. First, make sure you rule out any genuine sexual dysfunction issues or other problems that may be interfering with your performance or satisfaction, such a depression, addiction issues, and so on.

Once you have ruled those out, you can then begin to see the unfulfilling sex not as a problem between the two of you, but rather an issue for the two of you to tackle. If there are specific things you wish your partner would do – and of course if there are things you wish he or she would not do – these are the most obvious things to bring up. And also, make sure you ask about what he or she wants to start adding in or wants to remove from the bedroom.

Yes, it can be a bit awkward to start having this chat, but it’s so worth it. And really, if you’re intimate enough with this person for intercourse, you can handle some discourse on the matter, too.

Make Communication During Sex the Opposite of Awkward

More often than not in life, the anticipation of something is much worse than the event itself. We may dread a public speaking engagement only to find ourselves energized and excited by the crowd in the moment. We may fear an upcoming review at work only to find ourselves praised and promoted. And we may dread talking about sex – especially during sex – as much as we love the thought of our sex lives improving, but without the talking, things won’t get better in bed.

So, how to make the sex talk, so to speak, less awkward? Own it. You need to tell your partner that you want to start communicating more about sex and even talking during the act. Just break the ice directly, and then take a step back and see how the topic sits with him or her. Chances are good that your partner will be equally happy to begin communicating more about and during sex, and that, as is so often the case, you have built up anxiety about the sexual communication for no reason.

If the sex talk does seem to be a bit awkward, agree on a time that you will both discuss things in detail and agree to not talk about sex outside of this “safe” time. And during that time, agree on how you will communicate during sex.

Create Your Own Love Language

Once you have breached the topic of sex and are ready to talk more during sex, know that you don’t have to have a long, in-depth running chat while you are going at it. It may be more than sufficient to use just a few words now and then, such as: “Keep doing that,” “Let’s skip that right now,” “Softer,” “Harder,” “Slower,” “Faster,” and on it goes.

If you and your partner are comfortable with more complete dialogue and instructions and requests during sex, then by all means go for it. Think of something like: “OK, now I want you to lie down and start…” well, we’ll let you fill in the blanks however you want – the point is you don’t have to speak in single or few word commands, you can communicate however works best for you.

RELATED: 100+ Questions to Ask a Girl You Have a Crush On

You can also communicate during sex without words. A squeeze of the hand can be agreed to as a sign to keep going, while a gentle tap can be agreed to as a signal to take it easy or to stop a given activity. You can direct one another with your hands, your eyes, and with sounds other than words – just take the time to talk about nonverbal sexual communication at some point to be sure that you are both on the same page.

And one final note on talking: it’s a good idea for every couple to have a safe word even if you don’t engage in any sort of highly active, aggressive, or role playing sex. Establishing a word that will immediately lead to a cessation of the given activity is a way to ensure that you both are ready to change or stop the sex without any judgement of your partner, guilt on anyone’s part, or a loss of trust or respect for one another.

Don’t Overthink or Over-Talk It

Better communication will lead to better sex, that’s just a given. But there is also a time to stop talking. If you find being too vocal during the act is killing the mood, dial it down on the talk and consider using physical cues.

And also, if you talk about sex during sex for a while and the sex gets better, you can probably stop talking again and it will remain improved.

Is Envy Harming Your Relationship? It’s Time to Understand the Three Dimensions of Jealousy