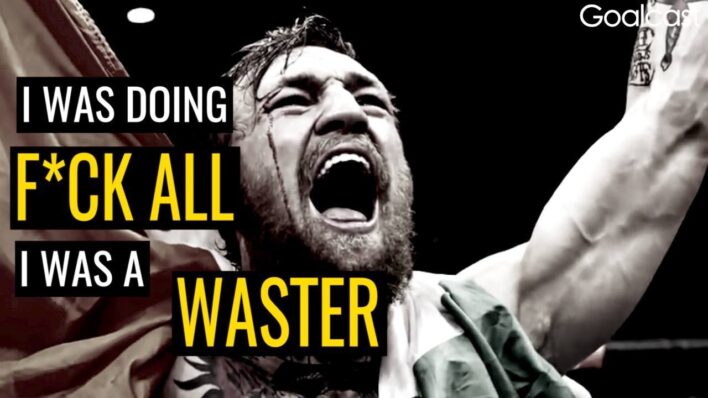 Conor McGregor – Outwork That Doubt Irish UFC champion Conor McGregor talks about how he used the power of his
By Goalcast    June 1, 2017

Irish UFC champion Conor McGregor talks about how he used the power of his imagination to fight his way through adversity.

“I was doing fuck all, I was a waster. I was a waster. Got that, called that a lot, you know what I mean? But in the struggle, you know, when things are going good and you visualize these good things happening, you visualize more good things happening, that’s easy. What’s not easy to do is when things are going bad and you’re visualizing the good stuff and that was what I was able to do. I was able to, you know, even though I was having these troubles at home and even though I had no real … I had no job, no … you know what I mean, or whatever, I didn’t actually know what I was doing. If it didn’t happen, it didn’t happen but I still was able to feel like it was. I was still able to go into a different … Just use my imagination, like a kid would use his imagination. I was basically just using my imagination and then when I started getting that focus and realizing, oh fuck, I’m going to make this happen.

“It’s all just a perfect storm that is happening for me and that is why I have this tunnel vision and that is why I’m willing to kill every single man in my path. If you have a clear picture in your head of something that is going to happen and a clear belief in that, it will happen, no matter what, then nothing can stop it, it is destined to happen and that’s what happens, you know what I mean? It’s perfect.