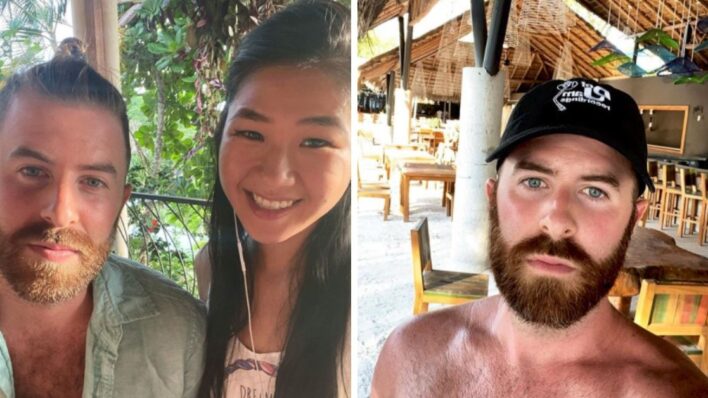 Matt Robertson and Khani Le’s third date in Costa Rica ended up being more than what they bargained for, due to the coronavirus.
By Kawter    May 23, 2020

Matt Robertson and Khani Le’s third date in Costa Rica ended up being more than what they bargained for, due to the coronavirus.

Spontaneity in dating is an underrated quality but sometimes, it can definitely backfire. This is what Matt Robertson and Khani Le discovered when their wild third date ended up being more than what they bargained for.

A third date that has lasted more than 60 days

Matt Robertson and Khani Le met are both from New York City. After meeting on a dating app, the two decided to take their third date to the next level.

At first, it started with a joke.

We were just joking about how we both needed a vacation. ‘Let’s go someplace warm. Let’s get away,’ stuff like that, but very much kidding around. Then it turned real because neither one of us backed down. I’m always testing people, and when she wasn’t backing down, I thought, ‘All right, I’ll keep going.’

So the two booked the flights in a spur of the moment decision, back in early March 2020. And now, their 5-day stay has turned into possibly the longest date in history as they have been stuck in Costa Rica for more than 60 days.

Then, the crisis hit

Both Matt and Khani had no clue that the coronavirus would turn into the global pandemic that it is today.

“This was at the time when it wasn’t that crazy. I remember you kind of heard about it in China and we were just starting to hear about it here,” Robertson remembers. “Trump was still saying, ‘It’s not that big of a deal. It’s the flu,’ or whatever.”

Their trip was going to consist of fun activities. Yet, as the days passed, they both saw that there were less and less people in their hotel. That’s when they realized things were more serious than they had thought.

“I think, day three or four, there were only eight of us left at the hotel. And then things started to change,” Matt said. “I think it was day four when they announced the level-four travel advisory. And within that 24-hour window is where everything started to really shift because that was the time when the flights basically stopped. So our flight got canceled the next morning.”

Since then, they have been staying at various hotels and Airbnbs, paying from their own pockets as they wait for a seat on a plane going back home.

Despite everything, their chemistry only got better

Any two people in this situation may run into a lot of issues. After all, it was technically only their third date and they did not yet know each other that well.

However, both Matt and Khani reveal that their free spirit nature is exactly what made the situation work. In fact, this was key to their successful cohabitation.

I don’t think we really had expectations about what it would it be like. I feel like we’re both similar in the fact that we kind of go with the flow, seeing what it’s like. I feel that we have a pretty similar approach to dating. We weren’t looking for anything serious, to have a good time, and we were both pretty independent.

They developed their own routine organically. S”o we’ve had a good balance of having your own space and then coming together, doing activities, stuff like that,” Le continues. “But so far, I’m very much going with the flow, and so far, the flow’s been good.”

On his side, Matt feels like the unusual situation was a learning moment, as he never thought he could go through something like this.

“I feel like it’s been an experience where you learn more about yourself. I didn’t think that I would even survive this long with one person.”

“It’s the longest I’ve ever spent nonstop with one person. This is like the equivalent of dating in dog years,” Matt admits. Indeed, the two feel like they have had have had a crash course in each other as People reports. Indeed, they realized they know a lot more about each other even though their relationship has just started.

“We’ve just rolled with it and made the most of it,” Matt says. “It’s like flipping the concept of dating on its head. It’s like we’re doing it completely backward. It’s almost as if you’re on rewind.”

While they wait for their return, Matt and Khani have been enjoying the “Pura Vida,” which means the “simple life.”

“People always say, ‘How are you doing? Pura Vida. Everything is good. Make the most of life.’ And it’s been our motto to get through this,” Matt says.

Making the best of a wild situation

Both Matt and Khani found each other in the most unlikely of circumstances. But they both took a chance together and have made the best of an inconvenient situation (to say the least).

If there is anything we can learn from them, it’s that taking risks isn’t always a bad thing. And when the risk comes with an unwanted consequence, we can always find the silver lining in it. Matt and Khani forged a stronger connection. They both knew they liked adventure, so they took it head on.