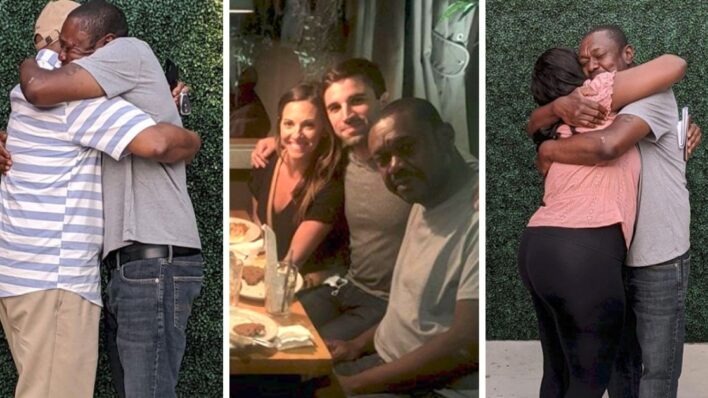 Every day, the world walks past homeless people. Few of us take the time to interact with them or find
By Kawter    August 11, 2020

Every day, the world walks past homeless people. Few of us take the time to interact with them or find out their story. It can be difficult or challenging to make that small effort but sometimes, the results can be lifechanging.

This was the case for Franklin, who lived outside Randi and John’s building. His life changed when the couple became friends with him.

Randi and John shared the incredible story of Franklin’s reunion with his long lost family on Instagram. After they got to know him better, they realized how kind and smart Franklin was. They felt like they needed to know his story.

“Franklin was a homeless man outside of our building who we got to know in the past couple of weeks. He is so smart and kind and all he wanted was to be reunited with his family,” Randi wrote on Instagram.

So Randi and John decided to make his wish come true. Franklin hadn’t seen his family in 20 years.

John and I searched the internet and John was able to find a phone number to a family member.

What they found out was so heartwarming

Once they found the phone number, Randi and John made the first contact. It turns out they had been looking for him too.

He and his family hadn’t spoken in over 20 years. As soon as we told them we had found him they said they would get on a plane because they too had been searching for him for the last 20 years.

Franklin’s family was elated with the news. They decided to get on a plane as soon as possible.

Randi and John then raised money so he could get new clothes, shoes and other essentials. Franklin was also able to stay at a hotel.

Watch this Goalcast video on this man’s incredible journey from homelessness to Harvard:

He changed them forever

Randi and John will never forget Franklin, who is now reunited with his family. In fact, they have a powerful lasting lesson to share with the world.

Please when you see someone on the street don’t look away if they say hello. It’s what he said made the difference to him every day- the people that acknowledged him kept him going and made him feel like someday he wouldn’t be so lonely.

“He touched our hearts forever and we’re going to miss him. We cannot wait to see what this chapter holds for him,” Randi finished.M