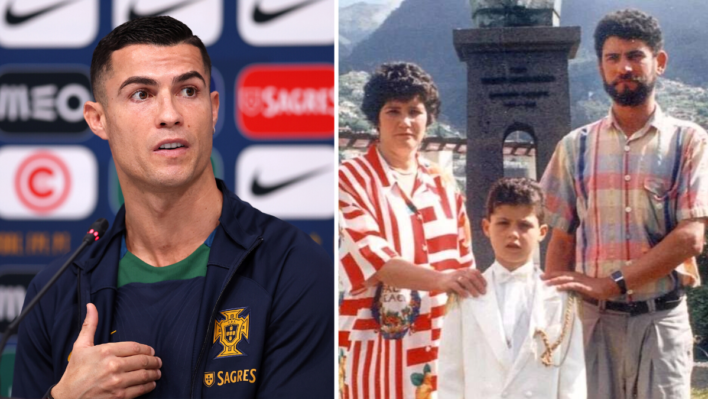 Despite his success, he has never forgotten his past.
By Heidi Hamm    November 23, 2022

Despite his success, he has never forgotten his past.

Sometimes people come into our lives and only stay for a brief time. And while the time may be short and seemingly insignificant, the impact they have on us lasts a lifetime.

For superstar footballer, Cristiano Ronaldo, that person was Edna.

While a recent explosive interview with Piers Morgan has set the soccer world on fire and led to Ronaldo parting ways with Manchester United, it was an earlier interview that revealed how humble Ronaldo really is and that he has never forgotten his roots.

He may be one of the world’s greatest athletes with a staggering net worth of $500 million, but it hasn’t always been that way.

The five-time Ballon d’Or winner grew up poor. The youngest of 4 children, he lived in a small house in Madeira, Portugal, and shared a room with all of his siblings.

His mother was a cook while his father was a gardener, part-time equipment manager, and a raging alcoholic.

RELATED: McDonald’s Denies a Homeless Woman a Cup of Water – And Then a Stranger Steps in

Times were difficult and food was scarce. The family struggled to survive, with his mom admitting in the documentary film, Ronaldo, that she considered aborting him due to poverty, his father’s alcoholism, and having too many children already. Her doctor refused.

He opened up about his childhood during an interview with Piers Morgan in 2019. During the interview, he shared one particularly poignant story about begging for food.

When Ronaldo was about 12 years old, he left home to join Sporting Lisbon’s youth academy. He told Morgan that it was a ‘very hard period’ in his life.

Ronaldo and his teammates would often go to the back door of the local McDonald’s begging for the castoff burgers at the end of the night. A woman named Edna and two other employees always obliged.

“Late at night, like 10:30, 11, we are a little bit hungry. So we had a McDonald’s next to the stadium where we lived and we’d always go to the back door and knock on the door, ‘Hey, any burgers left?'”

He continued, “And Edna and two more girls, which…they are unbelievable. I never found the girls again.”

RELATED: McDonalds Cashier Pays for Customer’s Meal Who Forgot Her Wallet – Little Did He Know She Was Going Hungry

It wasn’t for a lack of trying. He asked people in Portugal but by that time the Mcdonald’s had already been closed. No one knew what happened to Edna or her two co-workers.

He hoped that by sharing his story and getting the word out, someone would be able to help him reconnect with them. “It would make me so happy,” he said.

“I want to invite them to Turin or Lisbon to come to my house, to have dinner with me and I want to find these girls to be honest. I want to give something back because that period was a period that I appreciate so much.”

He never forgot that moment. “You can’t imagine how much it meant, to have burgers in the night.”

Initially, a woman claiming to be one of the employees came forward, however, Morgan refuted her claims.

She was excited when she heard that Ronaldo remembered her and had no idea of the impact her actions had on him.

Edna told the Portuguese Sports Daily Record: “I’m happy and it just shows how humble he is. I’m no one really for him to remember me like that. That was something that all happened such a long time ago. I’m really happy at what he’s gone on to become. I never thought he would remember me so many years on.”

She went on to say, “It shows how wonderful he is that he hasn’t forgotten small things like this from his past.”

There is no word on whether or not she and Ronaldo have yet had a chance to meet.

Sometimes It’s the Smallest Things That Make the Greatest Impact

Oftentimes we have no idea the impact our actions can make on someone’s day or even someone’s life. Even the smallest act of kindness can mean so much to a person. Something as simple as a smile, or giving away a free burger, can carry a significance we can’t even imagine.

Ronaldo never forgot the kindness of Edna and the other two unnamed girls. At a time in his life when he needed it, they were there, burgers in hand. While it may not have seemed like a big deal to them, it really meant the world to a hungry little boy.

It meant so much, in fact, that years later, with millions in his bank account and the soccer world chanting his name, he still remembered it as a defining moment in his life.

That is the power of kindness and compassion.