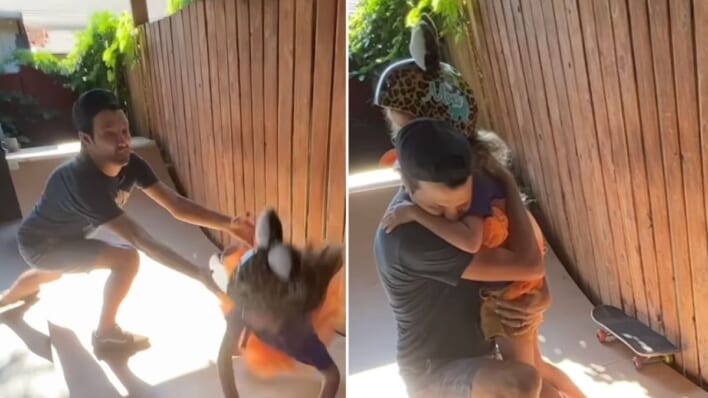 A 36-year-old dad in Washington state is being praised for his kind and gentle parenting techniques.
By Amber Dowling    September 21, 2022

A 36-year-old dad in Washington state is being praised for his kind and gentle parenting techniques.

As a parent, it can be hard to regulate our emotions, especially when we’re tired or not meeting our own basic needs. It can also be hard to stay calm when we are scared, particularly following an accident or a near-accident. But, as one dad recently reminded us, staying calm in a scary situation can make the world of difference for your child.

An Adventurous Family in Washington State

A 36-year-old architect in Washington state named Robert (who withheld his last name) has been posting videos of his family for a while now. Often five-year-old Aubrin and two-year-old Torin do sporty things, like snowboarding, skating, hiking, or mountain biking. But it was one post from this past August that caught fire. Why? Because of Robert’s stellar parenting skills.

In the video, his daughter Aubrin was skating on the ramp they built in their backyard when she took an unexpected (and kind of hard) fall. Rather than freak out or lose his cool, Robert calmly asked his daughter, “Did it scare you, or did it hurt you?”

RELATED: Dad Builds Secret Room In His House For Daughter – What She Finds Inside Shocks Her

When Aubrin said the fall did indeed hurt her, he checked her for injuries and hugged her. Then, he gave her compliments about her techniques to build her confidence back up.

“Trying something new can be scary, but re-trying something after slamming can be terrifying,” he explained in the caption. “I had to regain her trust, and she needed to re-establish her confidence after this slam and it was a tough but beautiful rollercoaster experience.”

A Dad Helps His Daughter Get Back on the Board

Rather than forcing Aubrin to get back on the board right away, Robert gave her the choice to try again or wait. “What if I fall again?” Aubrin wondered in the video. “I’m kind of scared… and I really want to do it.”

“Sometimes it’s scary doing hard things,” Robert responded. “And it’s totally up to you whether you want to give it (another) go right now.”

In the end, Aubrin wanted to, and she got back on. Then, with her dad’s help, she eventually got the hang of the move.

RELATED: How a Dad Afraid of Heights Jumped 25 Feet Into Assawoman Bay to Save a Drowning 2-Year-Old

“I want to say that I think that’s really amazing that after that fall, you’ve gotten up and you’ve worked through that fear,” he added to his daughter.

“This is one of the biggest psychological battles we face as humans because once that negative experience has made its home in our brain, it’s very hard to get it out,” Robert explained in his caption.

“Seeing her slam sucks the air out of my lungs, and my heart drops, but I just try to stay calm and redirect with some questions or comments while surveying the situation.”

Many people were quick to praise Robert’s cool-headedness during the entire situation, saying they wished their parents growing up had been as gentle and nurturing with them following similar accidents rather than forcing them to try again immediately.

“It’s the classic comeback story of falling and getting back up to try again, which is something that everyone has encountered in their own lives,” Robert later told Today. “The message is clear: We have to do better,” he continued.

“Our actions during this crucial and short stretch of time have lasting effects on our children that ripple through future families and generations.”

RELATED: Teen Finds a Secret Room and Treasure in New House – And Makes an Inspiring Decision

In his caption, Robert also explained that it isn’t always easy, but it is crucial. “A parent’s emotions (depending on how you instinctively react) will often times influence the child’s emotional response,” he continued.

“It’s my goal to remove my influence and allow her to just be, to feel, to hurt at her pace, and it allows me to get a better reading of how she’s truly feeling in these pivotal moments… If you calmly lead with empathy and support without applying pressure, you’ll do just fine.”

We’re All Doing Our Best

No parent is ever perfect. We often think about how we parented our children in a particular situation and how we could have handled things differently. After all, parental guilt is real, and there is no one-size-fits-all manual.

But Robert’s post is an important reminder that staying calm in any given situation is always a good route. If your child falls, talks back to you, doesn’t seem to be listening, or is just in a downright mood, staying calm and not overreacting could make a massive difference in what happens next. Or if you do lose your cool (because again, no one is perfect), approaching your child later on and talking about it is critical.

This story also solidifies the idea of not forcing a kid to push through fear but to examine it and talk about it instead. It may not work in all situations, but as a starting point, this dad definitely showed us how it’s done.