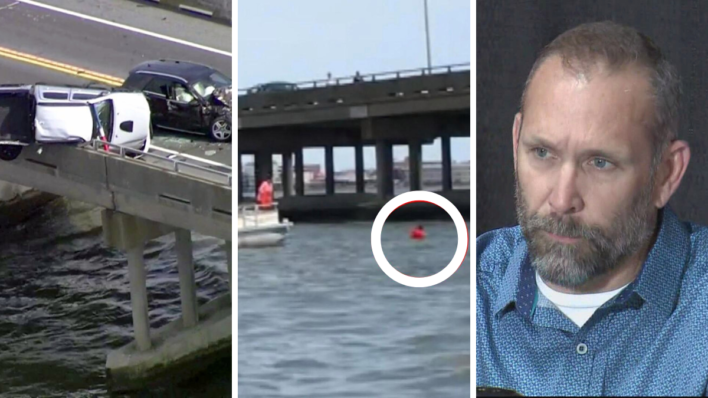 When one father involved in a car crash noticed a 2-year-old in Assawoman Bay, he jumped straight into action.
By Bryan Liquor    August 2, 2022

When one father involved in a car crash noticed a 2-year-old in Assawoman Bay, he jumped straight into action.

Route 90 bridge in Ocean City, Maryland, was a scene out of a horror movie. Amidst a multi-vehicle crash, a 2-year-old girl was ejected from her car, over the guardrail, falling 25 feet into the waters of Assawoman Bay.

Just when help seemed out of reach, it would be the unlikeliest of heroes who saved the day.

How a Father Heroically Saved a Baby Girl From Drowning

One of those involved in the accident was Jonathan Bauer and his 13-year-old daughter Ava. While they were both in shock, they were okay. Bauer then spotted the baby in the water and could not just stand by.

As per TODAY, Bauer recalled the scary scene. “I saw the car seat and some other items and about six feet away from the car seat was a little girl,” he said.

She was on her back completely floating, head completely out of the water, arms moving, legs kicking, and a little pink dress.

With the motivation to act, he told Ava to flag down the first emergency vehicle she saw, and sprung into action. Paying no mind to the 25-foot jump, Bauer dove into the bay to save the girl.

He made sure the child was alert, putting her against his shoulder and patting her back. The toddler was later flown to The Johns Hopkins Children’s Center, where she was thankfully fine.

How a Community and the Air Force Thanked a Brave Dad

While Bauer wanted to keep his identity a secret at first, some acts are too great to keep under wraps. And in good time, his city would wrap its arms around their hero.

First, Maryland Governor Larry Hogan presented Bauer with a governor’s citation for his “incredible selflessness and bravery.” Then things really took off for Bauer.

RELATED: Mother Of Six Wakes Up To Strange Noises – Does The Most Selfless Thing To Save Their Lives

That’s when the Air Force’s Thunderbirds honored him by having him ride in the back seat of an F-16 as part of the Thunderbirds’ “Hometown Hero” program.

“Jonathan Bauer is our hometown hero for the … OC Air Show,” the official Thunderbirds Instagram account wrote. “His selfless act shows the best America has to offer, and we’re proud to have honored him with a flight today.”

How One Father Proved That Heroes Are Made in Seconds

Bauer’s wife Kerri would later say that despite not thinking twice to save the girl, her husband is actually scared of heights.

“I can’t say how proud I am of him. It doesn’t surprise me. If you know him, you know that that is something he would do,” Kerri said.

It just goes to show what we can all overcome when duty and motivation meet. Fanfare’s nice, but Bauer will tell you that the real success story is a little girl with a bright future.

We might only have moments to act, but we should all be ready to step up when needed.