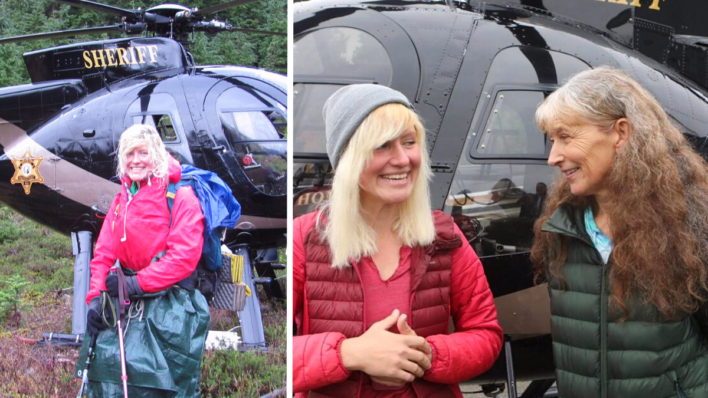 A feeling of uncertainty from a complete stranger led to an unbelievable rescue of a stranded hiker on the Pacific Crest Trail.
By Joel Balsam    December 2, 2021

A feeling of uncertainty from a complete stranger led to an unbelievable rescue of a stranded hiker on the Pacific Crest Trail.

Nancy Abell was out for a day hike in Washington’s Cascade Mountains when she met 34-year-old hiker Katharina Groene.

Originally from Munich, Groene was determined to hike the entire 2,650-mile Pacific Crest Trail. But Groene didn’t know what she was getting into.

She might’ve been just 200 miles from Canada, but she was hiking late in the season- usually, hikers should finish by September and this was October 24. Also, Groene didn’t have the proper gear to battle the Glacier Peak Wilderness, which is considered the hardest part of the trail.

With this knowledge, Abell pleaded with Groene to turn around over several hours of them walking together to no avail and the two parted ways.

A few days later, Abell checked the weather forecast and started to panic. A snowstorm was rolling through that Groene would be right in the middle of.

I just kept thinking about her being up there by herself, and I knew what it was going to be like.

Unable to calm her feelings of uncertainty, Abell decided to follow her intuition and called rescue services. She told them that Groene was walking about 15 miles per day, so they could estimate where she would be. She also told them what the hiker was wearing (a red jacket) and how much she was carrying.

Hiker thought she was going to die

Just as Abell thought, Groene was in danger.

She was soaking wet and was showing signs of hypothermia and frostbite while being 30 miles away from a ranger station. She was running out of food and her shelter had blown away in the wind- meaning she’d have no cover as the storm rolled in. She also had no locater beacon.

Groene’s really believed at the time that she was going to die.

I informed my parents, I apologized for dying on the PCT, for risking too much.

But just in the knick of time, a helicopter appeared to pull the German hiker to safety.

“I spotted her right in the tall timbers, she had come into a little opening,” pilot Einar Espeland said during the conference.

Espeland tried to land the helicopter 10 times, but he couldn’t due to the storm and rough terrain. Finally, he “jumped out of the helicopter and stacked logs to create a level platform to land on,” the sheriff’s office said in a statement.

Groene was rescued and went on to stay with Abell for a few days before she was ready to return to Germany. Nancy admitted that it was her maternal instincts that helped her persist in Groene’s rescue.

If Nancy had not taken action Katharina would have most likely died in the mountains.

Be there for each other

Sometimes, we can be too stubborn for our own good. While Groene wanted to prove to herself that she could complete the hike, she had to be pragmatic- and she almost died because she wasn’t being realistic.

Fortunately, she met Abell, whose years of experience in the area informed her intuition, and Groene was rescued.

The lesson here is to follow your intuition when you feel that you or someone you know is in danger. It could be the difference between life and death.