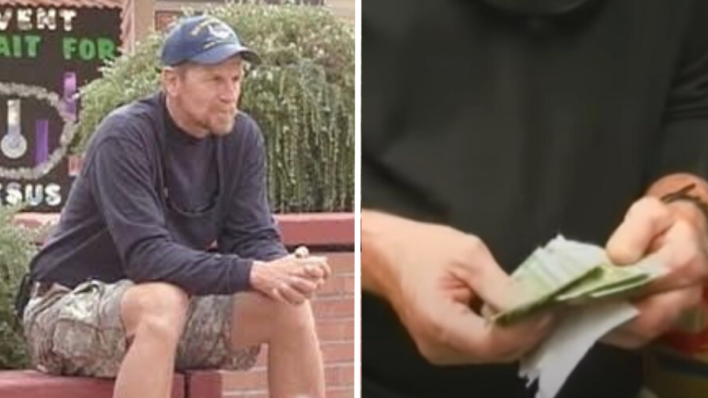 Homeless Man Finds $3,300 And Laptop In Abandoned Backpack – What He Did Next Changed His Life

One Arizona man restored faith in humanity when his selfless deed changed his life.
By Amber Dowling    January 11, 2022

One Arizona man restored faith in humanity when his selfless deed changed his life.

Sometimes you can count on people to do the right thing.

When Dave Tally found a backpack with a laptop and an envelope full of cash in 2010, he could have chalked it up to a very lucky day. The homeless man and recovering drug addict counted $3,300 in the bag, an amount that would make a fairly big difference in his life. However, as tempting as it was to keep the money, deep down he knew it wasn’t the right thing to do.

Back then Tally was sleeping in the basements of local churches and trying to save up enough money to fix his only source of transportation: his bike. That money could have bought him a brand new one. Instead, he turned the bag to his boss at the Tempe Community Action Agency, an outlet that helps homeless people in the area find jobs. Tally had been working there part-time.

“Finding the envelope with the case was just mind-blowing. There were lots of crazy thoughts that went through my head,” Tally told ABC News at the time. “I went into survival mode for a moment, actually more than a moment, thinking about all the things I could do for myself.”

“I beat myself up pretty hard for even thinking I would spend one dime of that person’s money,” Tally added.

It wasn’t easy, but I know it was the right thing to do.

Tracking down the owner

After Tally made up his mind to return the bag, he faced the problem of tracking down its owner. There were no identifiers on the knapsack or a way to get into the laptop without a password. But then someone thought to check the flash drive that they’d also found inside of the bag to see if it held any clues.

It sure did. Arizona State University student Bryan Belanger had uploaded his resume to the drive, easily providing Tally with his contact info. As it turns out he was carrying that cash because he was buying a used car off of Craigslist, and when he accidentally left his belongings in a station on the way to work, he figured that money (and his laptop) were gone forever.

“It’s just the greatest thing I’ve ever experienced, I think,” Belanger explained to ABC News. “It really is a lesson to keep your faith in people, and character exists no matter what your circumstances are.”

Belanger was so moved by Tally’s good deed that he offered a cash reward and promised to volunteer at the Tempe Community Action Agency. In the meantime Tally’s story made the local news, and strangers began sending him cheques and seeking him out to hand him cash in-person. As he result he had more than enough to fix his bike with, but even more importantly he was able to use his new platform as a way to educate others and speak out against the stigmas homeless people face.

“My time being on the streets, I met some of the most intelligent people that just made bad choices,” Tally said.

They are just everyday people that have a different way of life right now.

The story didn’t stop there though. Years later Tally revealed the day he found the money’s rightful owner was the day his life changed. People kept sending him donations to the point where he was able to get his own apartment and stop sleeping in church basements.

“I’ve been stopped several times by other homeless people,” he said in a YouTube update. “They tell me that since all this attention has been brought onto homeless people, that people maybe look at them in a little different way. That right there is more important than anything.”

If there’s one takeaway from Tally’s heartwarming story, it’s that those who are without a home deserve just as much respect and compassion as everyone else. In fact, maybe they deserve a little bit more. Not everyone would have expected Tally to track down the backpack’s owner, however in doing so he not only dispelled stereotypes, but he also turned his entire life around.

Of course his story may have had a different ending had so many people not felt touched by his good deed and sought him out to help. So maybe we could all take a page from this book and pay it forward in our own way, either by dropping a couple of extra dollars into the hands of the next person you see on the streets, donating to a charity, or simply by showing a little more compassion.

After all, you never know what kind of life circumstances a person has gone through to get to that point, or what they’re really like deep down.