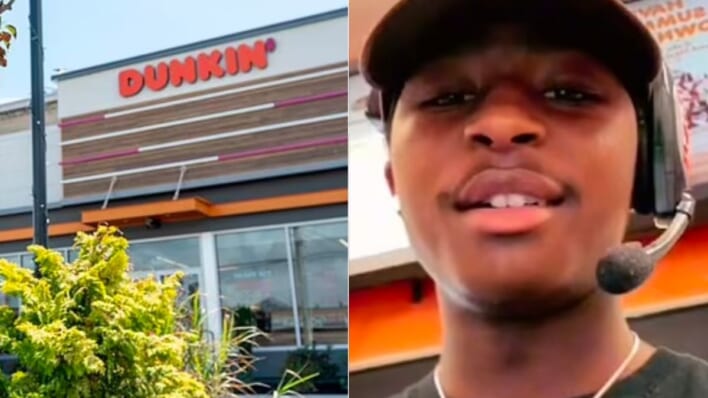 Sahmir Schenck, a Dunkin’ Donuts employee, hopped on TikTok to confess what some consider a grave sin. But it’s not as simple as you may think.
By Amanda Shaw    September 23, 2022

Sahmir Schenck, a Dunkin’ Donuts employee, hopped on TikTok to confess what some consider a grave sin. But it’s not as simple as you may think.

Fast food workers have to deal with a lot of annoying and unpleasant customers. They’re often the target of mean, impatient people. They sometimes suffer the backlash of an irate customer when they themselves have done nothing wrong.

But recently, a fast food worker has been in the limelight for something that he is doing to customers—something a lot of people are deeming wrong and unethical.

Dunkin’ Donuts employee Sahmir recently admitted on TikTok that, when drive-thru customers pay for the order of the person in line behind them (a movement known as pay-it-forward), he pockets the money—effectively deciding to pay it forward to himself.

The pay-it-forward movement is generally met with approval: one goodwill gesture informs the next. But what happens if the extra money you give to the cashier doesn’t go to the person behind you at all?

This was the subject of debate on many social media platforms, with people weighing in from all over the world. And at times, it took a turn for the philosophical.

RELATED: Woman Buys Homeless Man Coffee at Dunkin’ Donuts – Then, He Hands Her a Shocking Note

If you’ve freely given money away, then is your good deed done? Do you need to know where it goes after?

Initially, commenters were quick to condemn Sahmir’s actions as glorified stealing. They called it unethical, saying that the money was not his to keep in the first place. Others tried to offer more morally acceptable solutions to the boy clearly in need of money: ask for a raise or get a better job.

Still others continued to vilify him, saying that he should be fired immediately and that his actions show he’s not trustworthy.

But some could liken Sahmir to an entry-level Robin Hood, stealing from the rich to give to the poor. And Robin Hood was a hero.

From Vilification to a Greater Philosophical Question

A few commenters wanted to get to the heart of the issue: why did Sahmir feel the need to take the money in the first place? Does he not make a living wage?

Others were indignant about how this fast food worker was being treated, saying he shouldn’t have to pass money from one well-off client to the next. “Get out of the car and do it yourself,” one woman wrote.

RELATED: Struggling Woman Caught by Police Stealing 5 Eggs to Feed Her Family – What Happened Next Will Make You Believe in Humanity

The debate continued, enflaming some people’s ideas of social justice and begging the question: What does pay-it-forward really look like? One affluent customer helping out another affluent customer? Or is it an opportunity to give, no questions asked? In the words of one commenter, “If the client wants to be nice, he shouldn’t care where the money goes.”

Others were more tongue-in-cheek, saying Sahmir has a future in politics or that he’s smart and they wish they had thought of it themselves. Still others questioned the whole concept of pay-it-forward, saying that it puts people on the spot and that we don’t all have money to give away.

Where Do You Stand on the Issue?

Does the underpayment of fast food employees justify what Shamir did? Should he be fired immediately? Or should we take a closer look at the quality of life of a worker at Dunkin?

Regardless of whether one might label Sahmir’s actions as right or wrong, the bigger questions truly at the heart of the issue give us a lot to think about. Maybe next time you’re in the drive-thru, pay it forward to the next customer down and the employee behind the glass.