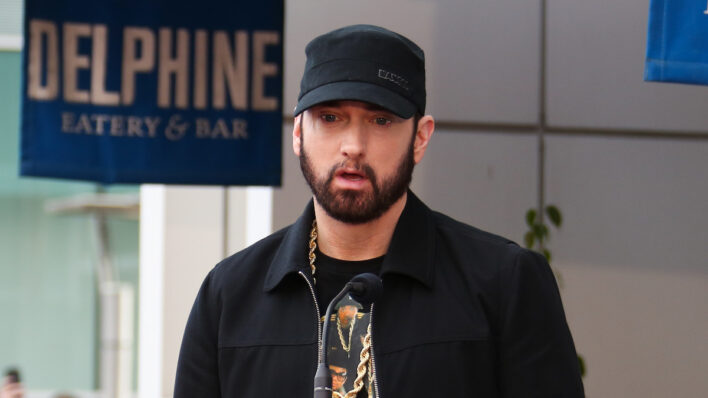 Eminem has had a career that’s spun over three decades but his latest social media attention hasn’t been for new music.
By Alice Broster    May 6, 2021

Eminem has had a career that’s spun over three decades but his latest social media attention hasn’t been for new music.

Throughout 2021 Eminem has been trending online, on and off. The 48-year-old rapper has had a career that’s spun over three decades but his latest social media attention hasn’t been for new music. TikTok users are calling him out for lyrics from some of his biggest hits. When it comes to controversy, Eminem is no stranger and his latest criticism has opened up another conversation about the prominence of cancel culture online–and the difficulty of looking back at older artists with a contemporary lens.

Eminem has highlighted how his career has changed. Before being picked up by Dr. Dre, Far Out outlines that Eminem was the “rap-battle king of Detroit.” At that point, he had a young daughter and was tackling a substance abuse problem. His first EP in 1997 introduced the world to Slim Shady, Eminem’s alter ego. So began a career that’s been celebrated by many but hasn’t come without a lot of criticism.

He’s had high-profile confrontations with Mariah Carey, Nick Cannon, and Ja Rule and also been accused of being homophobic and bigoted. The latest Eminem controversy highlights how difficult it is to judge an artist’s work when they’ve had a career that’s lasted for 33 years and counting. Furthermore, when he’s surrounded by fame and music awards it’s so easy to forget that like everyone else, Eminem is a product of his upbringing. And it’s something he’s spoken about extensively.

Why are people canceling Eminem?

Cancel culture is described as “withdrawing support for (canceling) public figures after they have done or said something considered objectionable or offensive.” It’s become a buzzword online and is often linked to public shaming. Over the years Eminem has been as famous for his chart-topping songs, as his sometimes antagonistic lyrics. And looking back on a star who has been writing music since the late ‘90s, especially in the context of social media and outrage, can be very difficult.

According to Esquire, TikTok users started to analyze some of Eminem’s older lyrics in Feb. 2021. In a clip that’s since been deleted, one user played “Love the Way You Lie” by Eminem and Rihanna. They picked out the line “if she ever tries to f*cking leave again, I’m a tie her to the bed and set this house on fire” and wrote, “Yesssss let’s cancel him.” This triggered many other users to look into his past music and use the hashtag #canceleminem.

In response, Eminem shared a lyric video to his song “Tone Deaf” on March 5. Radio X reported that during the video he rapped, “won’t stop even when my hair turns grey (I’m tone-deaf) cause they won’t stop until they cancel me.” The song is from his 2020 album, Music To Be Murdered By.

While his response may seem dismissive, the rapper has already apologized to Rihanna for shocking lyrics concerning her experience with abuse. Back in December 2020, he shocked fans when he apologized to his “Love The Way You Lie” collaborator. On Sirius XM’s Shade 45 he spoke about his latest album and the lyrics on the track “Zeus.” He rapped:

And wholeheartedly, apologies, Rihanna for that song that leaked, I’m sorry, Ri it wasn’t meant to cause you grief.

Billboard explained that the apology is in reference to a leaked lyric recorded during his 2009 Relapse album. The lyric in question is “I’m not playing, Rihanna, where’d you get the VD at? Let me add my two cents. Of course I side with Chris Brown. I’d beat a bi— down too. If she gave my di– an itch now” and refers back to Chris Brown’s assault on Rihanna in 2009.

Speaking on Shade45 he said, “It’s 10 plus years old, but I’m not making excuses for it. I think I just said it cause it rhymed. And I think I’m sure looking back now, I should have thought better of it.”

Eminem opened up about his controversial lyrics

Esquire notes that Eminem’s music has always been controversial and this is far from the first time that people have looked back on his previous work and criticized him heavily for it. Over the last few years, as more stars have been called out online for their work or things they’ve posted or said, the spotlight has largely left Eminem alone.

However, Eminem has spoken about how his lyrics have changed, to an extent, over time and that’s due to his life changing but also society moving on and changing him. “Sometimes I’m trying to appease people who think, Man, I miss when Eminem was raw. But I’m not killing Kim on songs anymore — we’re good now, and she’s the mother of my daughter,” he told Vulture before the release of Revival in 2015.

Kim Scott is Eminem’s ex-wife. In his 2012 song “Kim” he wrote, “Here, I’ll scream with you, ‘Ah! Somebody help!’ Don’t you get it, bi*ch? No one can hear you.” Reflecting on his work five years later he said to Vulture, “I’ve grown and sometimes I want to reflect that — but when I’m writing, a line will pop in my head that’s so f*cking ridiculous that it’s funny, and depending on the punch lines I need and the rhyme schemes in the song maybe I’ll use it.”

And the rapper’s life has changed considerably since getting sober and embracing fatherhood. The Sun explains that Eminem is the father to Hailie, Whitney, Alaina and has custody of his brother Nate. Speaking to Mike Tyson on the Hotboxin’ podcast he said, “[Hailie] She’s doing good, and she’s made me proud for sure. She’s graduated from college [with a] 3.9 [score. I have a niece that I have helped raise [Alaina] too that’s pretty much like a daughter to me, and she’s 26. And I have a younger one [Whitney] that’s 17 now. It’s important to keep your kids grounded.”

His demons haunted his songs

Eminem has reflected that many of the lyrics that he’s written throughout his career have been tied to the context of his life. Esquire has highlighted that many of them have “glorified misogyny, domestic abuse, homophobia, and murder.”

By all accounts, these are problematic but they also reflect the symptoms of a bigger issue. Growing up, Eminem barely had any contact with his absent father. Bullied in school, his unstable mother and home was a catalyst to his decision to drop out at the age of 17.

“Whenever something good happens, the bad always follows,” Eminem said about his upbringing. “That’s the story of my life since the day I was born,” Eminem explained that he’s carried a lot of baggage from his childhood into adulthood. “I went through a lot of that [self-loathing phase], too, growing up as a kid. People always think … that money can buy happiness, and it absolutely is not the truth,” he told Mike Tyson.

To look at them under the lens of 2021 can be stark–and with good reason. Fortunately, we have evolved collectively as a society and we are more conscious of unacceptable behaviours. That is something we should absolutely not disregard. Being able to look back and be critical of the past is essential. However, reducing such a long career down to a few social media posts or a hashtag is very simplistic and ignores the bigger picture of his evolution as a person.

Eminem is a different man today

After working for over 30 years Eminem has outlined that when he got sober, there was a shift in his work. It’s been reported that at the peak of his addiction, Eminem was taking up to 20 pills a day. “I used to get pills wherever I could. I was just taking anything that anybody was giving to me,” he told the New York Times in 2011. It’s been reported that he was addicted to Vicodin, Ambien, Valium, and Methadone.

Getting sober changed Eminem as a person and an artist but also his experience as one of the most famous rappers on the planet. “A lot of the problems I had with fame early on were because I was in very heavy addiction and didn’t realize it. By the time I did realize it, it was too late — I was so far gone,” he told Vulture.

I had a hair-trigger temper, too, and the littlest things could trigger it. That’s definitely better now. I used to get in fights over road rage and stuff. What I’m trying to say is that I’ve settled in with myself and with fame. I’m growing, man. I’m getting more mature and I’m okay with that.

What someone puts out at the age of 20 or 30 may differ when they’re 40 or 50. It doesn’t excuse their behavior but giving them the space to grow and apologize is key. Eminem has enjoyed international success and become one of the most famous faces in the rap game. However, his career is a testament that we are products of our upbringing. Money, fame, and new relationships can’t erase where you’ve come from, and in some cases, they may exacerbate underlying problems that were already there. We all carry baggage, but it’s how you recognize it, process it, and apologize for any hurt you’ve caused that counts.