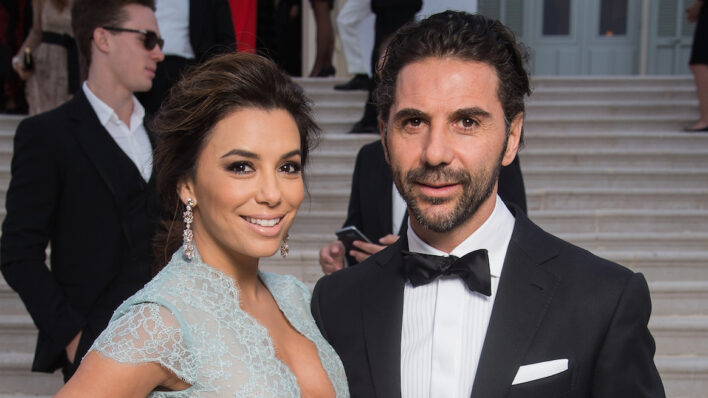 Like her onscreen character in Desperate Housewives, Eva Longoria’s love life has been tumultuous to say the least but in the end, she got her happy ending.
By Barbara Pavone    June 19, 2020

Like her onscreen character in Desperate Housewives, Eva Longoria’s love life has been tumultuous to say the least but in the end, she got her happy ending.

Eva Longoria was at the height of her career when her personal life came tumbling down around her. At just 35, she was one of the biggest TV stars on the planet thanks to the success of Desperate Housewives, but she was heading for her second divorce. A divorce that turned into one of the most talked about splits in Hollywood.

As stories of her husband’s infidelity hit the press, Eva made a conscious decision not to let the failure of a marriage define her self-worth, or her outlook on love. Instead, she kept her heart open and, just a few years later, found her true “partner in crime” — Mexican media mogul José Bastón.

Here’s what we can learn from Eva Longoria’s approach to overcoming heartbreak:

Eva Longoria’s love life didn’t get off to the best start. Following her 2004 divorce from General Hospital actor Tyler Christopher after just two years of marriage, Eva was sure she had found The One when she met NBA pro Tony Parker later that year.

The couple said “I do” in 2007, but just a few years later, she was to be divorced again. Unlike her first split, which she managed to keep out of the spotlight, her breakup with Parker was as high-profile as it gets.

Eva announced their separation on Twitter, writing, “It is with great sadness that after 7 years together, Tony and I have decided to divorce. We love each other deeply and pray for each other’s happiness,” she told fans. Unfortunately, that caring sentiment was quickly overshadowed by salacious cheating rumors.

As Extra confirmed at the time, the actress had discovered “hundreds” of text messages from another woman on Parker’s phone. What’s more, that woman was allegedly a mutual friend.

Sports Illustrated reporter Bryan Armen Graham tweeted that the actress had “found text messages from wife of a former teammate on Parker’s phone.” While the female’s identity was never confirmed, she was believed to be Erin Barry, the wife of Parker’s San Antonio Spurs teammate Brent Barry.

She refused to blame herself

The end of any relationship is difficult, but Eva Longoria’s divorce was made all the more heartbreaking by infidelity… and fame. However, rather than allowing the scandal to impact her self-worth, the actress vowed to never blame herself. Sitting down with Ellen in 2011, she shared the biggest lesson she learned from the ordeal.

I realized you cannot identify yourself through a man or through your marriage.

Speaking with CNN that same year, Longoria fought back tears as she called the split “heartbreaking” and admitted to feeling “a bit” humiliated. Even so, she assured host Piers Morgan that she would not be putting any time or energy into a grudge. “[Tony Parker] is not a bad person, he just wanted something else and I don’t hate him for it,” she reasoned.

Of course, it wasn’t easy.

Eva Longoria in US Weekly

“But in so many of those questions, I immediately stopped and said, ‘No, don’t start doing that,'”she revealed. “Because you can get stuck in that cycle and you can carry on to other things.”

As Eva so rightly pointed out, “Society usually thinks there’s something wrong with the woman. ‘Oh, he cheated on her, so she must not have been sexually satisfying him. She must have been a ball and chain!’

Why did he have to have a reason to cheat that had to do with me?

In addition to accepting the fact that the failure of her marriage wasn’t her fault, Eva also found healing by having an honest conversation with her ex. She wasn’t afraid to ask the toughest of questions in order to find closure and peace of mind.

As the actress-turned-producer revealed, she chose to confront Tony about his infidelity. “Having the conversation, I really wanted to provide a pillow for him to say and express ‘the why,’” she explained. “Because I really wanted to know why.” Although the truth “didn’t make me feel better […] it helped me understand.”

She experienced love at… third sight

Timing is everything and, according to Hola, Eva Longoria and her future hubby, José Bastón, actually met twice without any sparks before a third encounter changed everything. The first time was in 2009 when Longoria appeared on Televisa, a Mexican TV channel where Bastón worked as an executive.

In 2013, they were reintroduced by a mutual friend, but the Desperate Housewives still did not

Six months later, that all changed when the same friend introduced them again. This time, everything was different. “I had no memory of meeting him the first time, but we had immediate sparks,” she recalled. “It was like the cliché angels singing and there was a glow around him and it was immediate chemistry.”

The next day, the pair ended up indulging in a lunch date that lasted for four hours and, although she hadn’t realized it before, Eva had met her match. “He was the most handsome man I’d ever seen,” she said of the Grupo Televisa president. “He was so charismatic, charming, sweet and funny” and she was smitten.

I want to yell from the highest mountaintop about everything that goes on with us.

“I’m so happy and excited to be with a person as kind as Pepe is,” she continued. “He is probably one of the first men I’ve dated that has been older and established and, basically, a grown-up,” she told the outlet. “It is so nice to be arm-in-arm with someone who is your equal.”

She felt married before she was ever engaged

That perfect partnership quickly translated into a perfect bond. When Bastón popped the question during a December 2015 holiday in Dubai, the actress couldn’t help but joke that “the word fiancée feels like I got demoted! We feel married,” she said.

In 2016, the lovebirds said “I do” in Acapulco, Mexico, but Longoria was adamant that the marriage wasn’t as important as their union. Following the nuptials, she told People, “We were always married in our hearts and our souls, so the wedding was just a beautiful party to celebrate with everyone.”

Our wedding didn’t change our relationship.

“Once you realize a wedding isn’t a marriage, then you can learn to appreciate it more, and it lessens the expectations when you’ve gone through it,” Eva told People.

Why was it so important for her to make the distinction? Because she was proud of having learned from her past mistakes. Calling José “the man of my dreams,” she elaborated, “What makes my relationship with Pepe so much sweeter is that I don’t put pressure on myself or the idea of marriage as much as I did when I was younger.”

What’s more, her new beau gave her the confidence to change. “If I let go of the reins, I know Pepe knows how to drive, and I trust that,” she noted. “I’ve found patience to relax and let go.”

Eva Longoria and José Bastón prioritize each other

There might not be a secret to success when it comes to relationships, but Eva Longoria and José Bastón have found a number of keys to wedded bliss. For one, they’re “priorities for each other” and are always there for one another, no matter what. “He totally supports me, my career, my ambitions, and my drive and he’s one of the first people to get that,” the actress told Extra.

When the couple found out they were pregnant with their first child together, son Santiago Enrique Bastón, Eva couldn’t help but sing her husband’s praises.

She told Parade in 2018, “Thank God I have an amazing husband who has raised a son and really is the perfect example of what a man should be in this world today. He’s super supportive, super loving and encouraging. My son’s going to have an amazing role model.”

When you find the right partner, everything falls into place

While accepting her star on the Hollywood Walk of Fame in 2018, Eva Longoria revealed just how life-changing meeting José Bastón was. “The last 20 years of my career has given me so much,” she began. “It’s given me friends, it’s given me opportunities, awards, and honors, but then life gave me Pepe and his beautiful children. It’s with Pepe that I realized I can make all of my dreams come true, including my son who’s on the way, and I’m happy he’s here with us in this moment,” she declared, adding, “So thank you amor for completing all of my dreams.”

Longoria hasn’t shied away from sharing similar sentiments on Instagram, calling her beau the “kindest soul I have ever known,” her “partner in crime” and “the best human being I know. We travel the world together, we laugh together, we love each moment together in pure joy,” she once wrote on Instagram. “You are my angel, Pepe Bastón, put on this earth to fill my heart with love and happiness.”

Which is what the right partner will do. Yes, it’s easy to allow your outlook on love to be tainted by a bad experience (especially one as heartbreaking and messy as Eva Longoria’s), but giving up is easy — it’s keeping your head held high and moving on that’s harder, yet more rewarding. By making the decision to not blame herself and address infidelity head-on, Longoria was able to learn and grow, then get back to searching for happiness. A choice that definitely paid off.