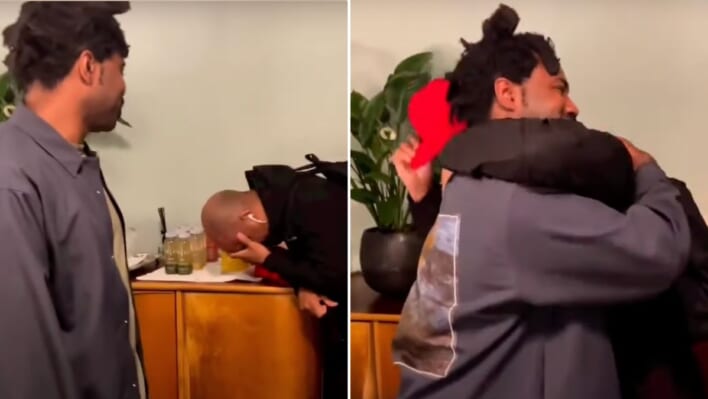 When podcaster Wallo267 met the singer Sampha, he came face to face with the artist responsible for helping him through a particularly dark time.
By Carl Wordsworth    October 26, 2022

When podcaster Wallo267 met the singer Sampha, he came face to face with the artist responsible for helping him through a particularly dark time.

Wallo267 is perhaps best known as the co-host of the popular podcast Million Dollaz Worth of Game. But long before he amassed his impressive following, Wallo seemed headed in a very different direction.

Growing Up in a Life of Crime and Poverty

After a childhood spent in and out of juvenile detention centers, Wallo was sentenced to 20 years in jail at the age of 17. He refused to let the circumstance define him, and speaks often about staying curious in prison– becoming an avid reader, and learning from his fellow inmates. Through speaking to new inmates, he learned about the rise of social media platforms like Youtube, Facebook, and Instagram, and began to grasp the reach these platforms had.

Upon his release, Wallo began releasing motivational content, steadily growing his following on platforms like Instagram and Youtube. Fast forward to today, and he hosts one of the most popular podcasts on Youtube, travels the country as a motivational speaker, and has leveraged his social media brand into partnerships with major brands like Foot Locker and the NFL.

In his newfound position as a well-known public figure, Wallo has met and interviewed some of the biggest names in pop-culture today. In early July 2022, however, a video emerged online of Wallo crossing paths with one musician in particular that left many fans amazed.

Sampha Lahai Sisay, known to his fans simply as Sampha, is a 33 year old musician originally from South London, and one of the biggest acts to emerge from England in the last 10 years. His work has been described as intimate, mournful, and hopeful– making it a fitting yet unexpected source of solace for Wallo halfway across the globe.

In the video of the two meeting, Wallo is seen approaching Sampha and immediately embracing him– overcome with emotion. Wallo has spoken publicly about his brother’s murder when he was younger, and how he learned to forgive his brother’s killer– sharing the story as a message of forgiveness and growth.

While meeting Sampha, Wallo can be heard saying “Your music helped me so much, man… I think about my brother man… I think about everything I lost in life.. you gave me so much hope.” In between sobs, Wallo continues to share his story with Sampha- trying to condense years of grief, growth, loss and gratitude.

Art Can Transcend Everything

Many can relate to the experience of looking for inspiration, hope, or consolation in music– though few get the chance to meet those behind the art. A quick look through the comment section on the video, however, reveals just how deeply this story resonates with those from all walks of life.

Many viewers share stories of their own tribulations, and how certain music– not just Sampha’s– got them through it. Everyone goes through dark periods in life, and the solace we find in art is one that transcends language, age, geography and any other superficial distinction.

If you’re a creative, keep going. You never know when the person who needs your art is going to find it.