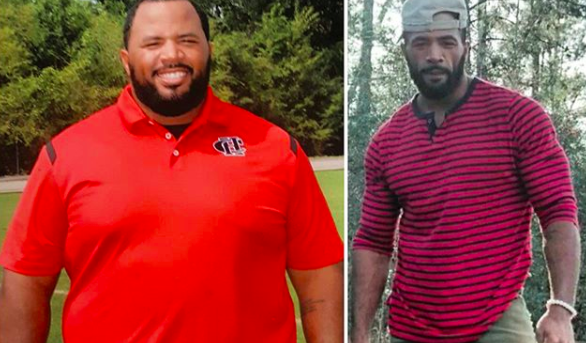 Robert Browne had a promising college football career ahead of him it, but it came to an abrupt end when
By MJ Kelly    April 13, 2018

Robert Browne had a promising college football career ahead of him it, but it came to an abrupt end when

Robert Browne had a promising college football career ahead of him it, but it came to an abrupt end when he suffered a devastating injury.

A fractured knee that required multiple surgeries would prevent him from pursuing his dream. Unable to play anymore, Browne turned to coaching. But just as he began his coaching career, he also experienced a severe bout of depression and weight gain following the life change. Browne went from weighing 275 to 355 pounds.

“My job as a health teacher and football coach, we try to tell kids how they need to live, but I wasn’t practicing it myself,” said Browne in an interview with Men’s Health.

A health scare motivates him to take action

Browne was at a family barbecue in 2013 when the repercussions of his weight gain started to become increasingly evident. His mother urged him to seek medical attention after he became dizzy and started to sweat heavily.

He took her advice and was told by a doctor that he was at high risk of having a stroke. Browne was prescribed medication to regulate his blood pressure, but the number on the scale stayed the same. He quickly came to realize he didn’t want to be stuck taking those pills for the rest of his life so he decided to take charge and prioritize his health.

“I was telling my athletes that they had to be the strongest versions of themselves, but I wasn’t practicing that, so I started practicing what I preached” said Browne. “I started working out with my athletes.”

A journey of a thousand miles begins with a single step

Browne remembered his love for heavy lifting and soon enough, he began losing weight and building muscle. But he knew he had to turn this journey into a permanent lifestyle. He swapped heavy Southern comfort food staples with veggies and lean protein. Today, he weighs 235 pounds.

Browne shared with Men’s Health that making little changes is super important when aiming to get rid of unhealthy and toxic habits. For example, he took the stairs instead of the elevator and parked his car further to walk more.

Now, the 30-year-old spends most of his time either working out, coaching, or teaching his students.

And all those little changes led to big payoffs in terms of finding a purpose. Browne’s goal is to inspire his students to become the best versions of himself and to cultivate the same love for football as he has, as well as inspire them to maintain a healthy and active lifestyle.