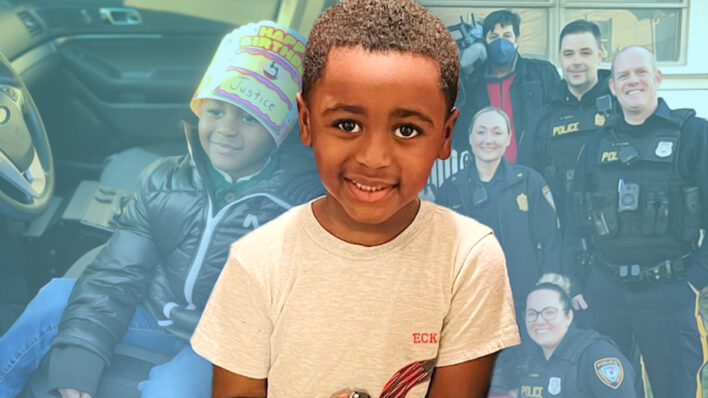 Two police officers in New Jersey made one little boy’s day after he accidentally called 911 on his mom’s cell phone.
By Amber Dowling    April 8, 2022

Two police officers in New Jersey made one little boy’s day after he accidentally called 911 on his mom’s cell phone.

Anyone with a kid knows how much they love to play with cell phones. After all, they see grown ups using their devices all the time (and yes sometimes for a social media addiction), so why shouldn’t they get a turn?

Well, as many parents have discovered over the years, the likelihood of your kid accidentally dialing 911 if they do get a hold of your cell phone is pretty likely.

New Jersey Mom Rasheeda Paige was reminded of this in February after her four-year-old son Justice Tucker started to play with her phone because his tablet died. She was in the middle of studying for her master’s degree so she asked him to wait patiently for five minutes while it charged. Of course, he grabbed her phone in the meantime without her realizing it.

According to Paige, Justice tried to unlock the device but it accidentally called the police instead. When he realized what happened, he gave the phone to his mom. “I told them, ‘I apologize, it was my son who was trying to use my phone,’” Paige explained to Fox news outlets.

As per New Jersey protocols, officers Vicky Teator and Matt Salvatore still came to the house and spoke with Rasheeda and Justice. They quickly assessed there was no emergency, but according to bodycam footage that was later released to NBC News, Justice was tugging on his mom’s sleeve with something pretty important to say.

He plays Officer Tucker around the house just about every day.

“It was the cutest thing, he’s tapping her on the shoulder, tapping. And just saying, I want to ask her a question,” Teator later explained.

“For his birthday he wants a police car,” Paige translated for her son, explaining he was upset that his own police power wheels were no longer working. “He wants to be a cop when he gets older,” she later added in the NBC report.

After the officers wrapped up the visit, they got in their cruiser and drove straight to the store. According to the NBC report, Teator, a seven-year vet with the force, has a four-year-old of her own at home, and meeting Justice motivated her to do something kind for him.

The officers purchased a replacement car and put it together at the station in time for Justice’s fifth birthday. And when the officers knocked on the door again, they had a little laugh. “I could hear the parents saying, ‘Did he call again? Did he take my phone this time?’ the dad said,” Teator recalled.

Although it’s not our usual call for service, our officers were more than happy to help out and put a smile on his face.

Of course, there was no call, just a big old birthday celebration. The officers had some of their co-workers come by and flash their lights, and then they unrolled the new, decked-out car for Justice.

RELATED: Cop Finds Out Nobody Showed Up To 9-Year-Old’s Birthday Party – Steps In With Best Response

“Officers Vicky Teator and Matt Salvatore responded to an unknown 911 call from a child. Upon arrival, they met this little guy, named Justice, who told the officers how much he loved the police and was upset that his toy police car had broken. He then told them he wanted a new toy police car for his upcoming birthday next week,” the department later shared on Facebook.

“The officers took it upon themselves to get him a new toy police car for his birthday and also got to snag this photo with him. Although it’s not our usual call for service, our officers were more than happy to help out and put a smile on his face.”

How One Thoughtful Gift Completely Turned a Kid’s Day Around

According to Paige, Justice was scared when he realized he had called the police. But the way they reacted instead built a strong and positive impression on the kid that will probably last a lifetime.

“Thanks to the officers, a scared four-year-old child quickly turned into a happy kid,” Paige commented on the department’s Facebook post. “He was so excited to tell her about his upcoming birthday and told her he wanted a new police car to replace the one he just broke. To his surprise, the officers returned with a new police car. Justice said they are the best, just like Santa. Sayreville Police Department is awesome. Thank you again.”

How Two Strangers Proved the Importance of Community

As Paige notes in the NBC interview, police officers aren’t just there for emergency calls — they’re also there for the community. And doesn’t that serve as a nice reminder to all of us to maybe consider participating a little bit more in our communities, too?

After all, you don’t have to be an officer to do something nice for someone in your neighborhood. Maybe the next time you’re shovelling snow or raking leaves, do your neighbor’s lawn or driveway as well. Pay for the coffees behind you at the drive-in tomorrow morning. Or show up with a small but unexpected gift for someone random in your life.

These small but kind gestures don’t just make someone else’s day. They also leave an impressionable mark that passes on the act of giving. Because if you can reach out and touch someone in an unexpected way after hearing this story, someone else may be motivated to do the same.