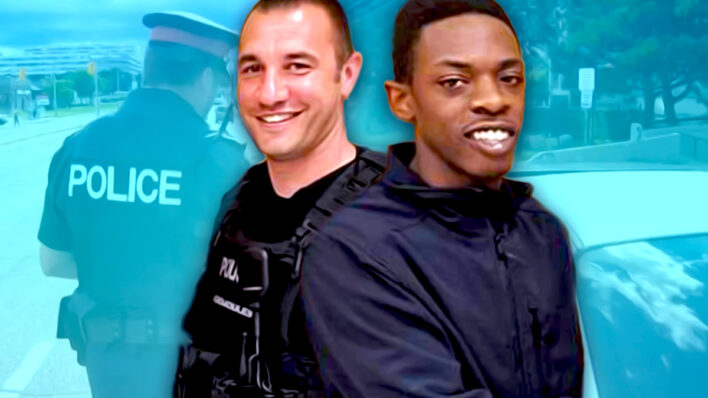 One 22-year-old man’s fortunes turned around thanks to the help of a compassionate cop.
By Amber Dowling    March 26, 2022

One 22-year-old man’s fortunes turned around thanks to the help of a compassionate cop.

Job interviews are stressful enough on their own. But imagine you’re on your way to one when all of a sudden police sirens start going off behind you. Your motivation would probably dwindle pretty fast. That was the situation a 22-year-old man named Ka’Shawn Baldwin found himself in back in 2019 when he was on his way to an interview at FedEx.

That unlucky day on the road, Baldwin had all kinds of thoughts going through his head. He knew his license had expired, but he didn’t know the vehicle, which he had borrowed from his friend, also had an expired license plate.

“Car’s going to get towed, I’m going to go to jail for not driving with a valid license. More tickets, more fines, that’s all I was thinking about,” he told Good Morning America.

“The routine thing is to tow the car and take the person to jail who is driving the car,” he added to NBC News.

When Baldwin explained to Officer Roger Gemoules that he was driving illegally because he had no other way to get to his job interview (where he would hopefully be able to start making money to pay for his expired license and to provide for his two-year-old daughter), he got an unexpected break that set him up for success.

With everything that’s been going on lately in the community and around here, police really get a bad rap.

At the time, Gemoules was a high school resource officer with the Cahokia Police Department in Illinois. However, the school was closed for spring break so he was on patrol instead. When he came across Baldwin, he practiced a bit of active listening. After hearing his story, he decided to help him out rather than give him a ticket he probably couldn’t afford to pay. Instead, he followed Baldwin back to his house, then gave him a ride to the job interview. In the end, Baldwin was only a few minutes late.

“He was polite when I pulled him over and he seemed like a good young man, so I wanted to give him a chance,” Gemoules added to NBC News. “I knew if I gave him a bunch of tickets and towed his car, it would be tough to recover from.”

“I was shocked that he actually gave me a ride to the interview. Normally cops, from where I’m from, they don’t really do stuff like that. It meant everything to me. It brought my spirits up,” Baldwin explained to GMA.

How a Police Officer Helped Turn a Man’s Luck Around

As it turns out, Gemoules’ offer of help did more than pick up a young guy’s spirits- it also helped him land the job. Baldwin later posted about the entire experience on Facebook in a post that went viral. And when he learned that he had been hired, he sent Gemoules a DM to thank him again.

It meant everything to me. It brought my spirits up.

Gemoules, meanwhile, was celebrated by his department for his kind actions, and the mayor of Cahokia also thanked him for showing compassion and putting community first. “I’m very proud of Officer Gemolus and the outstanding judgment and decision-making that he used in helping this young man,” Mayor Curtis McCall Jr. said.

We all know the law’s the law, but sometimes good people find themselves in unfortunate circumstances with no other options. Legally, Gemoules could have very well given Baldwin a ticket, and it could have resulted in him missing that job interview, not to mention the fact he would have yet another bill to pay.

Sometimes, as Gemoules proved, it really is better to give people a pass. Whether you intentionally forget how a friend or relative owes you some money, you let a parent with impatient kids cut in line at a grocery store, or you forgive a friend for being snappy after they’ve had a bad day, there are many ways to practice compassion in our everyday lives as well.

As this story reminds us, it’s a lot easier for everyone if sometimes we forgo that black-and-white view in favour of those softer shades of grey.