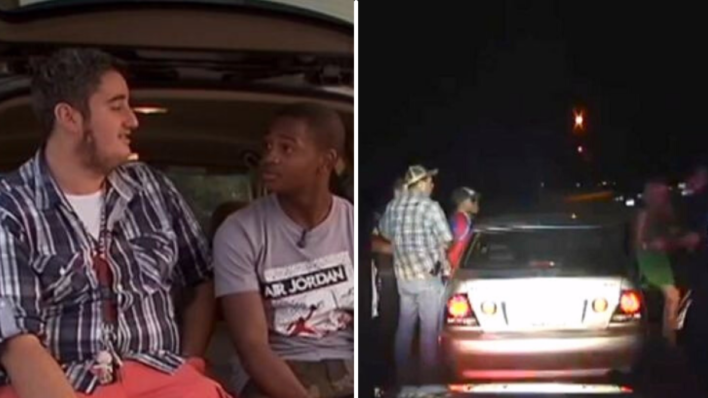 Two teenage boys are being hailed as heroes after they stopped an alleged kidnapping of a 25-year-old woman from their own car.
By Amber Dowling    March 9, 2022

Two teenage boys are being hailed as heroes after they stopped an alleged kidnapping of a 25-year-old woman from their own car.

You never know who you might notice in the car next to you when you’re cruising along or waiting at a stoplight. Sure, it’s not exactly the best place or time to get to know someone, so we often take a quick glance and then go about our busy days. But sometimes, noticing the smallest of details can make a world of difference in someone else’s life.

Back in August 2013, 19-year-old Aaron Arias and his 17-year-old friend Jamal Harris were driving in downtown Dallas to pick up a friend from work when they noticed an attractive girl in the backseat of the car next to them. Not being the one in the driver’s seat, Jamal’s gaze lingered a little longer than Aaron’s, and he realized the girl was mouthing something: “Help me.”

At first, Arias thought his friend was joking, but then they saw the driver’s face, looked back, and realized it was for real. So they got focused and called 911.

“Yes, I’m on the highway. I’m witnessing a robbery. Not a robbery, a kidnapping,” Arias explained on the call, which was later released and picked up by several news outlets. “It’s me and another guy. So we’re checking out the girl in the backseat because, we’re like, ‘Okay, she’s kind of attractive,’ and then all of a sudden the guy is turned back, looking at us,” he continued.

We looked in the backseat and the blonde female in the back was saying, ‘Help me’ or something, whispering it. So I’m assuming it is a kidnapping.

According to NBC DWF, Arias and Harris followed the guy for nearly an hour while they stayed on the phone with responders. Eventually, the driver realized he was being followed and he started acting erratically. He sped up, slowed down, and tried to lose the guys, but finally the police arrived.

“Thank God. You guys are awesome,” Arias said in the recording as the man started to flee. “Oh my God. Oh my God. Get him! Oh my God.”

Following a small chase, authorities arrested a man named Charles Atkins Lewis Jr. who was charged with aggravated kidnapping and held on a $50,000 bail. According to The Dallas Morning News, the unidentified, 25-year-old woman had been at a young professionals party downtown. It was about 11 p.m. when she was walking to her car and was struck on the head three times with what she believed was a handgun.

The man then forced her into the backseat of her car. Police later found a handgun and a knife, and in an affidavit, the woman told investigators she was fearful of sexual assault and death.

So it’s no surprise that when she was rescued from the car she ran straight towards the two teens who had ensured her safety, and gave them a giant hug. “I would describe it as the best hug I have ever gotten,” Arias later told NBC DFW, adding that he would like to stay in contact with the woman, but he also didn’t want to interfere with the investigation.

Thankfully, because of two teen heroes and the quick thinking of the woman in the backseat, this story had a happy ending. It certainly highlights the importance of trying to communicate your situation to those around you in a time of danger, but it also reminds us that if you see someone asking for help, you should always take them seriously.

If you can’t physically help a person yourself or the situation is too dangerous, calling 911 is always the best option. In this case, it may very well have saved this woman’s life. It’s also important to educate young adults and children on what to do and how to react if and when they ever find themselves in that kind of horrific situation. Because as much as we’d all like to think it could never happen, you really never know when you may witness (or be the victim) in a similar scenario.

trust your instincts
If you’re ever in a situation that doesn’t feel right, do not be afraid to speak up. It may save a life.
Tags
Share
← Prev Post Next Post →