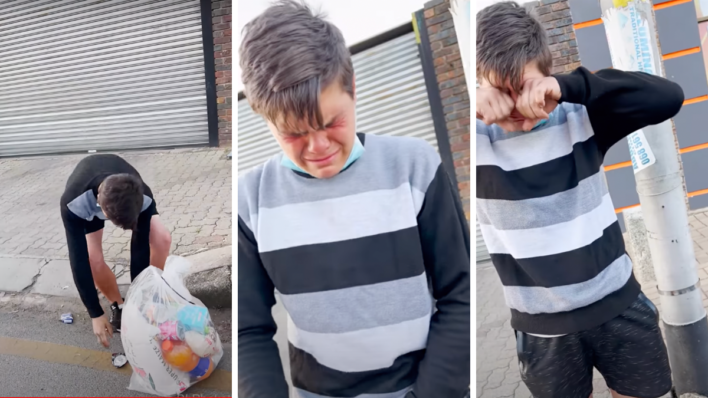 You may have heard of Bl Phakathi, South Africa’s “Secret Santa.” The motivational speaker and life coach is known for sharing successful, viral videos of giving and gratitude, and this past November he was at it again to bring us all to tears.

In a video posted to Phakathi’s verified YouTube channel last November, the man in question meets a boy working in loneliness on the streets collecting cans while cleaning and guarding cars for cash. Phakathi introduces himself to the kid, who identifies himself as Rudy.

The pair start to chat, with Phakathi asking him questions like where he stays, who he stays with, and how much he makes in a day (less than $50 in his local currency).

I want to study, but my father says I must start work.

“It is better than nothing,” Rudy explains over the last question, revealing he lives across the street with his father, who is separated from his mother.

“I want to work, actually. Because I’m tired of standing like this. Nobody wants to give me a chance because of this corona,” Rudy adds.

The boy then mentions that his father was working for “small money” every week, and now he comes to the streets to make money and support his family. “I buy food and cigarettes for my father and food for me,” he adds.

After hearing Rudy’s story, Phakathi hands him a giant bag of cans and food and tells him to take it home and give it to his father. The boy is clearly blown away and thanks the man for his kindness. He puts down the cans he has been collecting to shake Phakathi’s hand in gratitude, but instead, Phakathi hands him a wad of cash.

He asks Rudy to count the $350, then hands him even more bills totaling more than $1,000. “Now my heart is beating!” Rudy says, fighting back tears. When Phakathi tells the kid to bring some of the money home to his dad but to hide the rest so he can get on his feet, Rudy can no longer stop the tears from coming.

It was the toughest time, what happened to me. Thank you very much.

“Thank you very much,” he says, clutching the bills and wiping his tears before storing the money in the pocket of his shorts.

In response, Phakathi then hands Rudy a few more hundred-dollar bills. “Take this extra. It’s going to help you.”

After hugging it out and calming down, Rudy then picks up his cans and thanks the man again.

How Bl Phakathi‘s Kindness Can Inspire Your Own Generosity

The fact that Rudy still picked up his cans to exchange for money after receiving such a life-altering gift just highlights how unused to any kind of help this kid is. It’s also a huge reminder that although some children desperately want an education, they need to work and help support their families instead.

Phakathi records and shares these encounters to inspire others to give back, but to also highlight the reasons some people are in the situations they’re in. One of the most powerful components of this story lies in the comments section of the video itself. There, many people who are around the same age as the boy say he reminds them they have so much in their own lives and they often take it for granted.

It’s always nice to help others who are less fortunate than us through a donation, a bag of food, or a warm cup of tea or coffee. But it’s also nice to get to know someone and learn about their life story.

If you too want to inspire others to give and practice gratitude, sharing Rudy’s story is a good start. But also show it to kids who may not understand how those in other countries, cities, towns, and situations may live. They say you never know what a person is really going through until you walk a mile in their shoes. But thanks to Phakathi and his videos, at least we can see what an impact simple kindness can have.

lead with generosity
“True generosity is an offering; given freely and out of pure love. No strings attached. No expectations.” – Suze Orman
Tags
Share
← Prev Post Next Post →