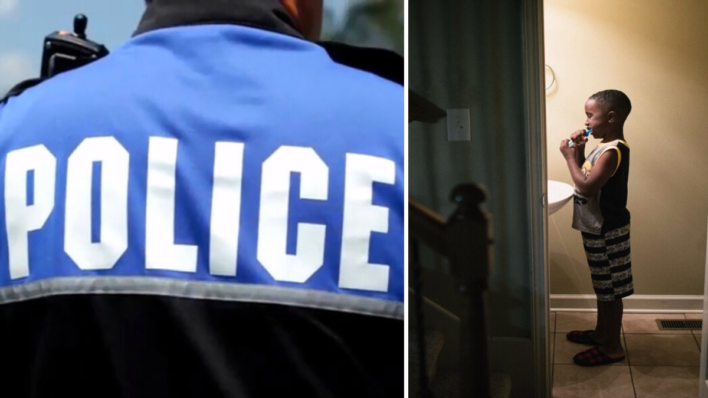 When Officer Alex Jones saw what all a little boy had in his room was a garbage bag full of clothes, he stepped in to help.
By Joel Balsam    March 16, 2022

When Officer Alex Jones saw what all a little boy had in his room was a garbage bag full of clothes, he stepped in to help.

Canadian Officer Alex Jones had been working the job for a decade, but never experienced anything like this.

One day during his shift he got a call at the station from a little boy named Cameron.

How Alex Jones Responded to the Boy’s Distressing Room

Immediately, Jones jumped into his car to help the boy, who didn’t explain what was wrong over the phone. In 15 minutes, he was at the address and saw the little boy on the front porch.

“My mom wouldn’t let me play my video game,” said the boy who was wearing overly-large glasses, according to Travel on TV.

But Jones had a feeling in his gut that told him something worse must be going on. So Jones asked Cameron if he could go inside the house, and the boy agreed — his mom was out “dropping off some food” for a neighbor.

What Jones saw inside surprised him. Despite moving into the house a few months ago, it was almost barren with hardly any furniture.

Jones followed Cameron to his room and opened the door, and was taken aback. There were scratch marks all over the door and the room was completely empty save for a garbage bag of Cameron’s clothes. No bed. No furniture. No toys, whatsoever.

Officer Jones Showed Up with His Own Big Surprise

After leaving Cameron, Jones looked into his situation. It turned out that the boy and his mother had moved to town recently to look after a relative who wasn’t well. It seemed like his mom didn’t have enough time or money to buy her child with necessities.

So Jones decided to do something about it. Soon after their first encounter, Jones showed up at the boy’s house with a truck full of stuff. “Hey, Cameron” the officer said. “Look at this.”

In his truck, Jones had a bed, TV, desk, chair and yes, a video game system all for Cameron to have. Needless to say, Cameron was speechless.

How Alex Jones Made the World a Better Place

Whether we’re on the job like Officer Jones, walking to work past a homeless person, or hearing about someone who’s struggling, we must find a way to help. That doesn’t necessarily mean buying someone a whole new bedroom set; just give and do what you can. If we all did that, there’s no question the world would be a better place.