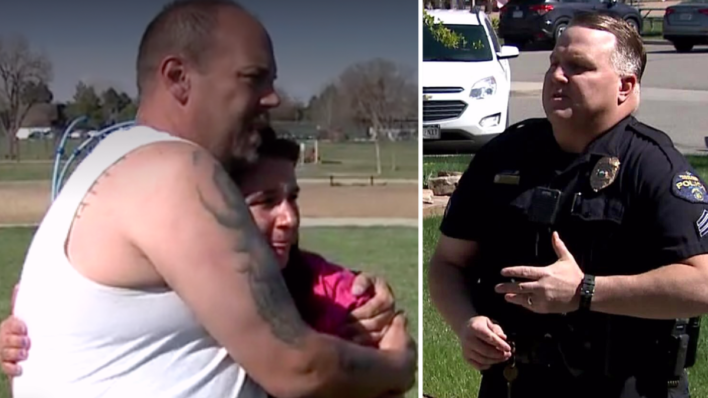 One police officer displayed the true meaning of ‘protect and serve’ when he was called to investigate a homeless family begging on the street.
By Sophie Babinski    March 10, 2022

One police officer displayed the true meaning of ‘protect and serve’ when he was called to investigate a homeless family begging on the street.

First responders are under a lot of pressure every single day. Part of the job of policing is having to make stressful snap decisions that can not only be life-saving, but life-threatening as well.

Often, these decisions are unpleasant and hard to make. In the case of one kind-hearted sergeant in Wheat Ridge, Colorado, however, the decision to change lives was easy and beautiful.

Sergeant Jungclaus Receives a Call About a Homeless Family from Citizens

Police in Wheat Ridge were called by several concerned citizens one morning when a family of five was seen panhandling and begging for money on the side of the road. Given that there were children involved in the situation, onlookers wanted to make sure everything was alright. Sergeant Jungclaus arrived at the scene, and what he came across touched his heart.

“A lot of times I think people have the perception that they are out there begging because they have alcohol problems or substance abuse problems. Sometimes that is the case, but those people need help too. They just need help in a different direction than people like this family who are struggling and falling behind.” Sergeant Jungclaus said.

The couple admits to giving Jungclaus a less than warm welcome at first. “I was a little upset about it. I didn’t want him here,” said father, Eric Downey.

My biggest fear is that I would lose my children.

Jungclaus discovered that both of the parents in the family had jobs, but they were not making enough to make ends meet and had begun experiencing homelessness. The family had been staying in a motel, but they were trying to raise enough money to cover a few more nights.

Sergeant Jungclaus knows that his role is to “protect and serve.” Sometimes protecting means issuing tickets and taking a punitive approach to wrongdoing. However, in this case, Jungclaus decided to truly be of service. He reached into his own pocket and decided to give the family enough money for at least one more night in their accomodations. Additionally, The Arvada Fire Department also brought clothes, food, and essentials for the kids in the situation as a way to help out.

We are not out there just to arrest people and give them tickets and do things like that. Of course, that is part of our job but our true job is to be out there for the community, communicate with the community, see what they need and see how we can serve them.

Jungclaus Proves That Every Person Is Deserving of Kindness

What Sergeant Jungclaus did was amazing. He realized that the family needed help and not more stress added to their plate, so he did what he could to help. When discussing his experience, Junglcaus added that it is important to think long-term when trying to help people who are experiencing homelessness. He advised people that they could help by sharing resources and contacting others in their network who could also further the cause.