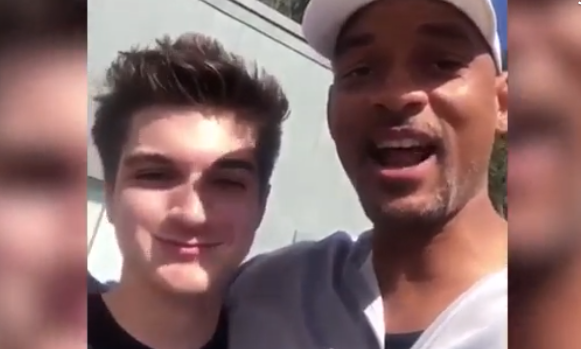 One South Carolina teenage girl just got the promposal to end all promposals, courtesy of Will Smith.  Bluffton, S.C. student
By Eliza Theiss    March 1, 2018

One South Carolina teenage girl just got the promposal to end all promposals, courtesy of Will Smith.  Bluffton, S.C. student

One South Carolina teenage girl just got the promposal to end all promposals, courtesy of Will Smith.

Instead of going the traditional way and offering her flowers or even performing a song, he enlisted the help of Hollywood actor Will Smith, a hopeless romantic himself. That’s right, the ingenious 17-year-old asked Will Smith for help asking his girlfriend to prom. How this happened is unclear, but Smith was in the Savannah area shooting a movie, and the boy’s dad works in film production.

Smith jumped on the opportunity to support young love, and staged the promposal in an Instagram video that went viral.

Of course, Felder said yes, telling The Island Packet that it was an incredible experience: “It was the most amazing thing! […] I don’t think there is a better way to get asked to prom than being asked by Will Smith himself.”

The Bright star made the occasion memorable with his typical sense of humor: “Hey, Ashley! What’s up? I’m here, you know, Andrew seems to be a pretty nice guy. And, you know, he wanted me to ask you to prom,” quickly adding “Not with me!”. Mooney’s invitation came just in time as well, since Will Smith only recently joined social media. (He’s been inspiring his followers his insightful posts ever since — check out what he shared with them during a trip to the Cayman Islands.)

Andrew is now being hailed as the “King of Promposals,” while his girlfriend Ashley is over the moon. “Andrew is incredibly good to me,” she told The Island Packet.

What makes the gesture that more special is that the couple has only been dating for two months.

Check out the viral proposal below: