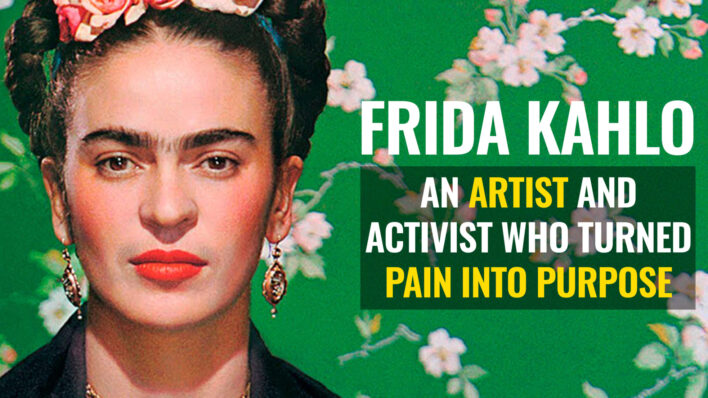 From beginning to end, life was far from kind to Frida Kahlo. You may know of this remarkable artist from
By Jenny Medeiros    January 26, 2018

From beginning to end, life was far from kind to Frida Kahlo. You may know of this remarkable artist from her paintings, where her grim realities contrast with vibrant notes of Mexican culture. However, you may be less familiar with the tumultuous experiences that inspired her work.

Frida Kahlo’s life was a fascinating blend of strength, endurance, and fierce dedication to her passions in the face of adversity. With a collection of almost 200 paintings, she depicts herself and her realities with unsparing sincerity and striking aesthetics. Frida’s bold personality, passionate work, and unapologetic views of society are still greatly remembered by artists, dreamers, and believers around the world.

This is the story of Frida Kahlo, an icon of patience and tenacity in the midst of life’s tragedies.

Growing up in isolation

On July 6th, 1907, Magdalena Carmen Frieda Kahlo y Calderón was born in Coyoacán, a town on the outskirts of Mexico City. Her father was German and her mother was half Spanish, half indigenous.

Her family home was called La Casa Azul (The Blue House), where she was raised in a very strict environment along with her three sisters. Frida’s mother was a religious fanatic and held her daughters to a rigid lifestyle, whereas her father was tender and understanding with them.

At six years old, Frida came down with polio. She could no longer attend school and was bedridden for nine long months. She was left with a shorter, thinner right leg – resulting in a permanent limp and life-long pain. In an attempt to disguise her shorter leg, Frida would wear three or four socks and a shoe with a higher heel. The children around her didn’t take to her condition very kindly and often mocked her with the name “peg leg”.

While her condition made her feel isolated from other children, it drew her closer to her father, Wilhelm, who suffered from epilepsy. They bonded over their shared experience with disability, and he taught her literature, nature, and philosophy while she recovered. He also encouraged Frida to box, swim, wrestle and play soccer to regain her strength. In male-dominated Mexico, these were very unusual activities for girls. Yet, she excelled at them. Discovering her love for art

When Frida Kahlo was 15 years old, Wilhelm decided against sending her to study at a convent along with her sisters. Instead, he enrolled her at the highly regarded National Preparatory School in Mexico City. Frida was one of the few female students there and soon became known for her cheerful and outspoken nature.

At the time, her interest wasn’t in the arts but in medicine and social sciences. She excelled in every class and frequently devoured books on Mexican culture and politics. Back at home, she enjoyed spending time at her father’s photography studio, where she helped him retouch, develop, and color photographs. Frida also received artistic instruction from a friend of her father, who recognized her potential and later gave her a job as an engraver.

However, art was no more than a hobby to Frida. Her real passion lay in political activism and she soon joined a group of like-minded students, known as the “Cachuchas”. Frida grew close to one of the group members, with whom she’d later be involved in an accident with. One of them would walk away unharmed, while the other would be changed forever. The accident that sparked a passion

At 18 years old, Frida was on the usual bus home with her friend when a streetcar suddenly veered in front of the bus – causing a crash. Frida was violently launched forward, fracturing her spine, crushing her pelvis, breaking her leg, and impaling her hip with a steel handrail.

Frida was in shock and quickly rushed to a hospital, where she was confined for several weeks. Eventually, she was granted leave and went home – only to continue her bedrest there for three more months.

Frida Kahlo spent her days alone, asking herself why this had to happen and how she could ever become a doctor now. Her career in medicine was officially over, but the door to a different opportunity creaked open.

As the days rolled past, Frida began to occupy her time by sketching. Her father noticed this and set her up with a special easel, a box of paintbrushes, and a mirror above her head. Being alone most of the time, she focused on painting what she knew best – herself.

Soon enough, what was once her treasured hobby was now the perfect outlet for Frida’s most fantastical thoughts and deepest emotions. Her lonely hours of confronting existential crisis now translated onto a canvas with artful strokes of her paintbrush. Hope for her future began to glimmer once again.

I think that little by little I’ll be able to solve my problems and survive. Defining her style through trauma

By the time she was 20 years old, her bedrest was finally over. Frida Kahlo re-entered the political scene with her old Cachuchas group and went on to join the Mexican Communist Party. Here she was introduced to a circle of political activists and artists, where she met the famous painter Diego Rivera. Having had a crush on him since high school, Frida married Diego two years later. Their marriage was passionate yet turbulent, with no shortage of affairs.

Over the next few years, the couple traveled constantly as Diego worked on commissions across the States. They reached Detroit in 1932, where Frida became pregnant and underwent a failed abortion. She then decided to keep the baby, but miscarried and was hospitalized for two weeks. Around the same time, her mother died from surgery complications back in Mexico. Frida became deeply saddened and homesick. Her sorrow came through in her paintings which now focused on suffering and included female figures from Mexican folklore – representing guilt and misfortune.

Being away from home for so long strengthened Frida’s love for Mexico. This made a lasting impact on her artistic and personal expression. Her style began to embrace cultural symbols and Aztec mythology. She also began to don traditional Mexican garments and changed her German name “Frieda” to the more Hispanic “Frida”. Betrayal and her first art exhibition

The following year, Frida and Diego finally moved back to Mexico City. Due to their strained marriage, they lived in separate houses joined by a bridge. Over the next three years, Frida’s paintings slowed as her health issues increased. She suffered yet another miscarriage, an appendectomy, and her toes were amputated to prevent gangrene.

Meanwhile, her marriage continued to deteriorate, as Diego was unhappy in Mexico and began an affair with Frida’s younger sister. Frida was deeply hurt by this, and her paintings became angrier and more intense. Her once delicate brush strokes were now harsh, her careful style now feverish. Although her paintings were mostly overshadowed by her husbands’ work, they raised the interest of leading Surrealist artist André Breton.

André was so impressed with the raw emotion displayed in her paintings that he invited Frida to her very first solo art exhibition in New York. She gladly accepted and traveled without Diego, using traditionally long Mexican skirts to cover her problematic right leg. The exhibition was a huge success thanks to her extraordinary work and vibrant personal style. The media loved her, and Frida went on to hold two more art exhibits in New York and Paris, although neither was as successful as the first.

After months of tedious socializing with the Surrealist crowd and exploring her bisexuality through various affairs, Frida returned home to Mexico City. Once she arrived, Diego demanded a divorce. After the split, Frida moved back into her childhood home – La Casa Azul. Here she painted prolifically and found peace while gardening and caring for animals. Meanwhile, her work gained recognition in both Mexico and the United States. Some of her paintings were sold right off the easel before she had even finished them.

Frida didn’t sell too many paintings in her lifetime, but she did have a few commissions. Although she was unable to finish them due to the passing of her beloved father in 1941. Frida was devastated, her sadness exacerbating her degenerative health conditions. She was forced to undergo surgery, which ended badly and led to further corrective surgeries. Her condition never really improved and she depended on crutches or a wheelchair to get around.

A year later, her right leg contracted gangrene and had to be amputated at the knee. Frida became severely depressed and relied on copious amounts of Brandy and painkillers to get by. Her thoughts of suicide became apparent in her subsequent paintings, although she showed attempts of positivity in her diary by sketching her leg along with the phrase “Why do I want feet when I have wings to fly?” After everything she’d been through, Frida Kahlo managed to find the stamina to keep going.

I am not sick. I am broken. But I am happy to be alive as long as I can paint. Finding freedom and leaving a legacy

Regardless of her condition, Frida didn’t let anything stand in the way of her political activism. Her art also continued to thrive and she was honored with a solo exhibition in Mexico – which Frida refused to miss. She arrived in an ambulance and lay on a bed set up in the gallery, where Frida laughed and celebrated with the attendees. For Frida Kahlo, laughter was medicine for the soul.

Over the next year, Frida maintained her passion for painting and the revolution despite her deteriorating health. She seemed to anticipate her death, filling her diary with sketches of skeletons and angels of death. Nevertheless, Frida went out to participate in a protest against Western powers, which ended up worsening her condition.

One night, not long after her 47th birthday, Frida came down with a high fever and overwhelming pain. In the same blue house she was born in, Frida Kahlo was found lifeless in her bed on July 13th. The official cause is said to be pulmonary embolism, but her nurse believed that Frida overdosed on painkillers during the night. Regardless, after a lifetime of surgeries and sickness – Frida Kahlo was finally at peace. The very last words in her diary read “I joyfully await leaving and I hope never to return.“

Although part of her did return. In the late 1970’s, Frida Kahlo’s complex work and lifelong struggles were rediscovered, transforming her into a figure of endurance and uncensored female expression. Today, she is the highest-selling female artist, an international cultural icon, and an inspiration for feminist and LGBT movements. She continues to live through her paintings and even a Hollywood portrayal of her life.

From her bold personality to her delicate brushstrokes, Frida Kahlo’s work offers a message of hope to those suffering as a result of an accident; that you too can persist, recover, and continue your journey. After all, as Frida says so herself, we can endure much more than we think we can.