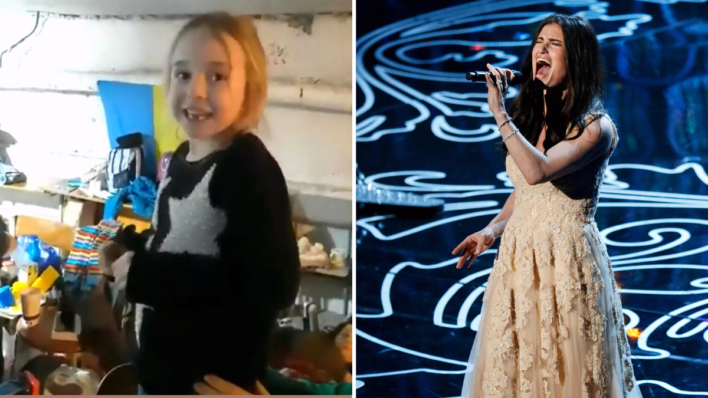 The singer and the writer of the Frozen original song “Let It Go” cheered on the little singer after seeing a clip of her on social media.
By Lindsey Staub    March 14, 2022

The singer and the writer of the Frozen original song “Let It Go” cheered on the little singer after seeing a clip of her on social media.

As more than a million Ukrainians flee to safer countries and the remaining citizens take shelter underground, one little girl sang a Disney song in a performance that went viral online.

The young Ukrainian girl, identified by CNN as a child named Amelia, used a bomb shelter in Kyiv as her own personal stage, as seen in a video tweeted on March 6.

Why Ukrainian Girl, Amelia, Sang “Let It Go” in a Kyiv Bomb Shelter

After Russia’s large-scale attack on February 24 started a war in Ukraine, many of the country’s civilians were forced to find refuge in basements, shelters, and metro stations.

“You don’t know where to go, where to run, who you have to call. This is just panic,” Liliya Marynchak, a 45-year-old teacher in Ivano-Frankivsk, told People.

While hiding underground due to the conflict, Amelia started to sing “Let It Go,” the hit song from Disney’s Frozen. The song, sung by the powerful Queen Elsa in the movie, is about releasing inhibitions in an act of bravery.

Idina Menzel – Along with Other Frozen Alums – Praised Amelia’s Strength

As Amelia sang, the crowd went quiet, a few even taking out cellphones to film. The clip that went viral and was viewed over 13 million times was originally recorded by a woman named Marta, who talked to Amelia before she started to sing. According to Marta, Amelia said she wanted to be “a singer on a grand stage,” to which Marta replied, “Well, why not start now?”

The video blew up on Twitter, even soliciting recognition from the stars of Frozen. Idina Menzel, who sang “Let It Go” in the movie, retweeted the video and added her own sentiment of recognition.

Amelia even looks like Elsa in the video, a single, long braid hanging down her back, similar to the ice queen’s. But more than just appearance, Amelia has something else in common with Elsa: A beautiful bravery.

Menzel was not the only Frozen-alum to comment on the video. Kristen Anderson-Lopez, who co-wrote “Let It Go” and the rest of the music from the movie, wrote her own message to Amelia.

“Dear Little Girl with the beautiful voice,” Anderson-Lopez wrote on Twitter. “My husband and I wrote this song as part of a story about healing a family in pain. The way you sing it is like a magic trick that spreads the light in your heart and heals everyone who hears it.  Keep singing! We are listening!”

Around the world, people really are listening. The invasion, ordered by Russian President Vladimir Putin, has been condemned by almost every country in the United Nations General Assembly, leading many to place severe economic sanctions against Russia. Various countries have sent monetary and military aid to Ukraine. The Ukrainian President Volodymyr Zelenskyy has urged Putin to meet for peace talks, a call that has been left unanswered.

Little Amelia, singing “Let It Go” as bomber planes circle above, is an example of this light in the darkness, of resilience. She is a beacon of hope, singing of bravery and truth as her country is under attack above her. As she sings “Let It Go,” she’s a reminder to keep holding on.

never lose hope
“What gives me hope in these tenuous times is the knowledge that there is precedent for change and there’s precedent for hope. Hope has bred change again and again.” – Ava Duvernay
Tags
Share
← Prev Post Next Post →